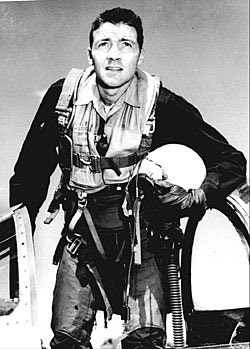 The late Colonel John "40 Second" Boyd would have a thing or three hundred to say about the F-35 Joint Strike Fighter, and not one of them good.

Boyd was a highly accomplished fighter pilot who fought through the Korean and Vietnam wars and went on to command the US Air Force fighter weapons school (think Top Gun).   Boyd learned in Vietnam that, in air combat, big, heavy and high-tech is no match for fast, light and agile.  Together with some like-minded pilots he came to form what was called the "Fighter Mafia" that pushed for the development and deployment of lightweight, agile and immensely capable aircraft like the F-16, the F-18 and the A-10.  He also wrote a brand new rulebook for air combat that was credited with the lopsided win in the skies over Iraq during Operation Desert Storm.

"One day you will take a fork in the road, and you're going to have to make a decision about which direction you want to go.   If you go one way, you can be somebody.  You will have to make compromises and you will have to turn your back on your friends.  But you will be a member of the club and you will get promoted and get good assignments.  Or you can go the other way and you can do something - something for your country and for your Air Force and for yourself.  If you decide to do something, you may not get promoted and get good assignments and you certainly will not be a favourite of your superiors.  But you won't have to compromise yourself.  To be somebody or to do something.  In life there is often a roll call.  That's when you have to make a decision.  To be or to do. "

John Boyd died in 1997 and the procurement wizards today, the guys whose hands are all over the F-35, are full fledged members of "the club" he denounced.  It is why the F-35 is everything that John Boyd fought against - a high-tech pig, the very sort of plane that consistently fails to deliver when it finally gets thrown into harm's way.

Most of us have long known about the foibles that beset American military procurement and its military-industrial complex.   Not so many realize how much worse that has become post-9/11.  We don't realize that we're allowing our military to become infected with the same diseased thinking that guides their counterparts in the U.S.    The ideological instincts of Harper, MacKay and some top generals in the Canadian military are leading Canada down a path we will come to regret taking only after it's too late to stop.

BTW, what's with "40 Seconds"?   Boyd got that nickname at his fighter weapons school where he claimed (successfully) that he could beat any fighter pilot in a mock aerial combat engagement within just forty seconds.
Posted by The Mound of Sound at 2:05 PM

I have connected the dots between cyberwarfare and the Military Industrial complex, it is a perfect war, no damage no casualties but billion dollar a day price tags and General can run the whole damn thing with a Wii.

There is one issue in your analysis. What is especially interesting about Boyd and his theories about EM and OODA is not that they were accepted by the USAF, because to a large degree, they weren't. His ideas had little to do with the air victory in Iraq, but almost everything to do with the ground war. Schwarzkopf credited him directly for inspiring the famous "left hook" that outflanked the Iraqis in Kuwait and left them stranded. Oh, by the way, then the USMC amphibious units and the rest of the US Army forces came up from the south and east to crush what was left of the Iraqi army. It was actually the USMC field manual that Boyd had helped rewrite prior to Desert Storm, not anything the USAF was using.

Even in my "golden years" I'm still using the OODA loop. It's invaluable in motorcycling. By constantly cycling through the loop the rider maintains situational awareness needed to adjust conditions to enhance conspicuity and avoidance of situations that could degrade into risks.