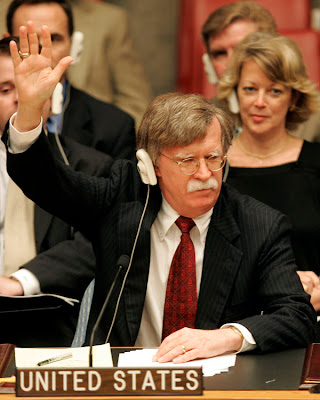 Rightwing nutjob Stephen Harper, er, John Bolton, has slammed the United Nations and its membership of irrelevant countries, a.k.a. "the world", for having the audacity to grant political recognition to a Palestinian state in a vote that's scheduled for this September.

Bolton says the UN has an "aversion to reality" and accuses it of "trying to create 'political facts on the ground '."

"...it is no surprise that the Middle East, one of our most intractable problems, provokes so much U.N. activity, even though the real-world consequences are so limited.


"The next episode of reality avoidance is the near certainty that, this fall, the General Assembly will vote to recognize a Palestinian state, possibly also declaring that state's borders with Israel to be the 1967 lines (actually, just the Green Line marking the 1949 cease-fire positions). Absent dramatic action by Washington, perhaps 150 or more of the U.N.'s 192 members, including many nominal U.S. allies, will vote in favor.  "

Bolton implies the White House should punish the United Nations for the temerity of the General Assembly, perhaps by withdrawing US funding for the UN.
Posted by The Mound of Sound at 7:34 AM

Why is he getting so worked up about something he insists doesn't matter?

Could it be he's tripping all over the bizarre droppings of his own brain?

Think his views aren't embraced by our own Ruler?