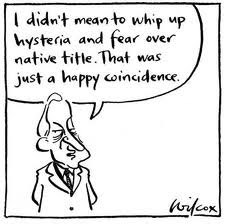 Whatever happened to ethical investing?   Venerable Harvard University may be just one of America's top schools pumping endowment funds into deals that could force thousands of Africans off their lands.

The new report on land acquisitions in seven African countries suggests that Harvard, Vanderbilt and many other US colleges with large endowment funds have invested heavily in African land in the past few years. Much of the money is said to be channelled through London-based Emergent asset management, which runs one of Africa's largest land acquisition funds, run by former JP Morgan and Goldman Sachs currency dealers.

Researchers at the California-based Oakland Institute think that Emergent's clients in the US may have invested up to $500m in some of the most fertile land in the expectation of making 25% returns.
Posted by The Mound of Sound at 7:42 AM

It is called blatant robbery at gun point whether it is for oil in Iraq, Libya and gas pipeline in Afghanistan. Robbing resources all over the world. Now land in Africa. What is new?

It's land rape, LD, and nothing but. Why be left to buy their crops at world prices when, with a small donation here and there, you can pick up the land itself for a song?

Third World farmland should not be a marketable commodity. Period.