A Night Made for a Riot 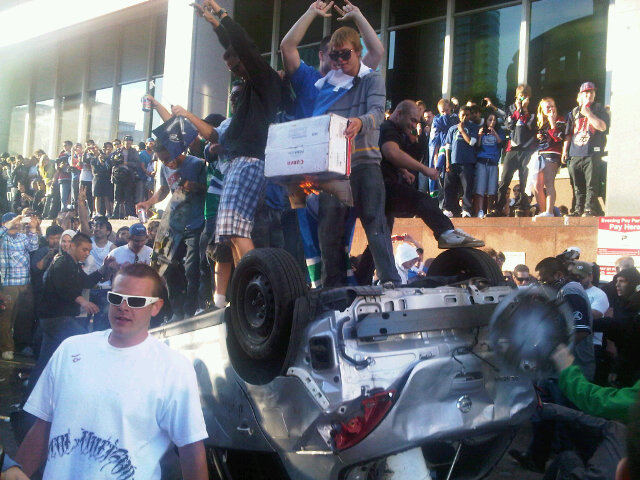 It was a night made for a riot.

By mid-afternoon radio stations were reporting throngs moving from the suburbs into downtown Vancouver.   Many employers let their workers off early for the event, Game 7 of the Stanley Cup finals, Vancouver's best ever chance to win the cup.

Most of those who swarmed the city streets did not have tickets for the game.  Their event was simply being with the throng.

Precautions were taken.   Extra police patrolled the streets.   Liquor stores in the downtown area were closed early.  Streets were blocked off to traffic to accommodate revelers.

The game was played, poorly.   Boston took the Stanley Cup, the crowd was disappointed.

But lurking in the crowd, like so many malignant cells, were young men who intended to get what they came for, win or lose - a riot.   Fueled by booze and, I assume, drugs, they set out on a rampage, the throng even if unintentionally providing them cover.   With that they got to work smashing windows, looting stores, setting cars afire like so many buskers of wanton, senseless destruction.

Some were arrested, many more got away - for now.   But we'll see their faces again as images from masses of news and cell phone video are methodically matched to names.  Web sites have already sprung up where witnesses are invited to post images of the miscreants so that they can be "tagged."

For these punks, their anger was expended last night on burned cars, looted stores and street violence.   But today there's another anger, of a much more lasting sort, and this time it's directed at them.  It must be a troubling feeling to wake up this morning realizing you're now being hunted; that your photograph is on display and people you know are dialing the police to pass along your name, even your address.

The cops won't get you right away.   This is going to take a while.  The sheer volume of their work guarantees that.  So you've got time to stew.   And, as you go back to school or back to work or as you hang out with your friends or have a drink in a familiar bar you'll be looking for faces that are looking at you just a little bit differently.

Sad really but, then again, it didn't have to be.   I'm reasonably sure that there weren't many of these criminals who went downtown without understanding they were at least willing to do these things if the opportunity arose.

We can clean up the streets, patch up the damage in just a couple of days.   Cleaning up our community will take a little longer.
Posted by The Mound of Sound at 6:53 AM