What Does the F-35 Mean for Canada?

Stevie Harper's insistence on saddling Canada with the F-35 Joint Strike Fighter has enormous significance for our country's military and diplomatic future.

Forget the business about defending Canada's vast northern airspace.  If that was the objective the F-35 deal would never get off the ground.  It's simply the wrong plane for that job.   Far too much airspace, far too few fighters with far too little range, far too little speed and far too little weapons load to begin to handle that job.  In the context of any conceivable threat coming out of the north, Canada's miniscule force would be quickly overwhelmed and neutralized.  If some aircraft are to defend our north, it won't be Canadian aircraft.

And what about that other quality, quantity?   I think it was Stalin who observed that quantity is a quality all unto itself.   Stevie's deal leaves Canada with 65-aircraft.  We're going to have to make do with that puny fleet for upwards of 30-years.   Divide 65 into 30 and you're left with a very low utilization rate.  The airframe is claimed to have an 8,000 hour service life provided it doesn't get too pranged up or even written off first.  So, to get the full 8,000 hours out of some of them and still wind up with a respectable number of survivors, you really have to  carve up that utilization rate.

Here's something to mull over.   The Netherlands is ordering 85 of these aircraft.  It's the 134th largest country in the world with less than 34,000 sq. kms. of actual dry land.  We've got 9,093,000 sq. kms. of land and we're going to meet our national defence needs with 65 of these turkeys?   Really?  Ya think?   I guess there's not much point in noting that Holland is about the same length as Vancouver Island or that VanIsl, at 32,000 sq. kms., is just a smidge tinier than Holland.  85 fighters?   I wonder what those Dutch have been smoking?  Never mind, I remember.

Here's something else to ponder.   The F-35 is not a standalone airplane.   As the Pentagon's favourite think tank, the RAND Corporation, found, it can't outrun, out climb or out turn even the now dated Russian fighters.   In other words, it has to count on not being seen or it will need to have stealthy escort fighters to defend it or, most likely, both.

In order not to be seen, that is in order to survive, the F-35 has to fly blind - no radar, no electronic emissions that will readily give away its presence and its position.   To do this it depends on receiving the necessary information from another aircraft that does have its radar on and can tell the F-35 driver what it sees.   Those would be the AWACS aircraft and Canada doesn't own any of those.  The Americans have plenty of them and NATO has a few.   So the F-35 isn't going anywhere except under the command of NATO or the US Air Force.

But you can't send the F-35 in to bomb something in the sort of contested airspace that requires stealth in the first place without aerial refueling tankers and the aforementioned AWACS aircraft and escort fighters to defend the lot of them.  Now those escort fighters, to be of real help to the F-35 stealth bomb trucks, would have to be stealthy themselves and that narrows the field down to just one aircraft, the American-only F-22 Raptor.   The F-22 can also do the F-35's job but the F-35 can't begin to do the F-22's job.   Which means - the Americans will be sort of like the knight perched atop the warhorse (the F-22) - while the rest of us will be the equivalent of the foot soldiers slogging through the mud carrying spears (the F-35).

The Australians tossed this whole scenario around.   Their force consisted of F-22s, F-35s and updated F-18s versus a gaggle of Russian-built Sukhoi 30-series fighters.   Because it was a war game, the Aussies gave their aircraft a 100% missile kill rate.  And then they pushed the start button.   So how did that work out?   Not all that well.   The defenders quickly ran out of missiles before they were overrun by the much cheaper, more numerous Sukhois.  Some of the Russian fighters hung around to gun the F-35s out of the sky while others blew straight through to shoot down the AWACS and tanker force.   With the tankers gone, the Aussie force fought on until it ran out of gas and crashed.  A one mission air war that yielded a phyrric win and an immediate, devastating strategic defeat. 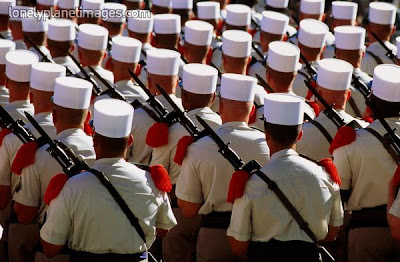 With the F-35, we're pretty much indenturing our military into American service for the foreseeable future.   At least the French give their Foreign Legion that lovely white Kepi hat.   Then again, the French also pick up the entire tab for their Foreign Legion.  So, remind me, why we're coughing up $30-billion to join America's Legion?
Posted by The Mound of Sound at 10:08 AM

I predict the F35 will never fly, its to expensive even for the industrial military complex.
http://thinkingaboot.blogspot.com/2011/05/military-industrial-complex-massive.html

I don't know, Steve. I think there are far too many in Congress beholden to Lockheed Marietta for anything or anyone to stop the F-35. Obama already stepped on the F-22 which sent a shockwave through Lockheed's books and I don't think he's got enough political capital to touch the 35.

And, as I tried to point out, the 35 seems to be the Pentagon's flypaper to get traditional allies more firmly under its influence or direction.

Getting involved in 21st century US military procurement is somewhat akin to getting introduced to crystal meth. Life is never the same afterward. That's how much everything has changed under the military/industrial/corporate warfighting/congressional complex.

The Harper government has clearly loved the samples, dont know why, all the benies have gone south. C17, Chinook etc etc. Have your read my ballad of Tony Blair, any chance we have many simultaneousness in the air. And ask Mike Harris if he every found justification for the 407 in that rarefied air?

Another look at how green a drone is compared to a plane.