It's Romney In a Landslide 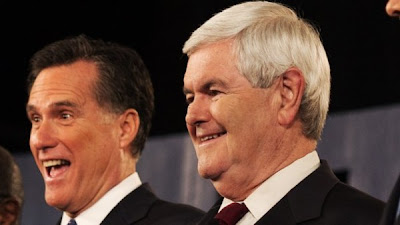 Mitt Romney can say all sorts of crazy stuff such as how much he likes to be able to fire people.  It don't matter.   Short of getting caught in public soiling his magic Mormon undies, Mitt's next adversary will be Barack Obama.

What's the giveaway?  That's easy.   When presidential nomination candidates from the most corporatist party in the most corporatist American government in a century start attacking the frontrunner for, well, practicing 21st century corporatism, they're all but formally admitting it's over.


In a sharp departure for a party known as friendly to business, Republicans seeking to slow Romney sounded more like populists as they bashed his work as a venture capitalist.

Former House Speaker Gingrich, brooding over negative attacks from Romney and his backers that knocked him out of the front-runner position, has launched the toughest onslaught.

"Mitt Romney was not a capitalist during his reign at Bain. He was a predatory corporate raider," a video produced by a pro-Gingrich group said.

And that, in case you missed it, was the sound of pressurized gas escaping that grotesque windbag, Gingrich.  Is it really too late for Sarah Palin to get behind the wheel of this clown car?
Posted by The Mound of Sound at 8:13 AM

Email ThisBlogThis!Share to TwitterShare to FacebookShare to Pinterest
Labels: Romney