Now imagine this was a supertanker filled with bitumen. 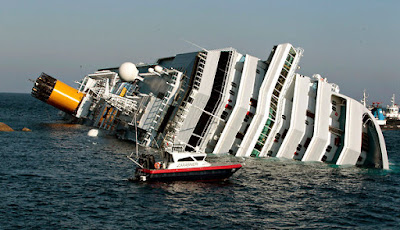 Only imagine it's a supertanker full of diluted bitumen wrecked off the proposed tanker port of Kitimat.  Okay, there are differences.   This is a cruise ship, fairly benign as wrecks go.   The supertanker would be disgorging tons of diluted bitumen, dilbit, full of acids, heavy metals and other toxins.   Another difference is that you wouldn't see the supertanker, not for long, because the rocky bottom around the port site can lie 600 feet down where there'd be no effective means to clean up the disaster.
And then there's this observation from The Guardian about what may have happened to the cruise liner, Concordia:

Like all forms of modern mass transport, cruise liners are utterly dependent on complex electronic devices to steer them – and on electricity to run these systems. Without power, a ship is stricken and with reports suggesting that an explosion occurred in Concordia's engine room shortly before the ship ran aground, early analysis indicates power loss is likely to have been a key factor in the accident.

With Harper's Kitimat supertanker port it's not a matter of if, it's only a question of when.
Posted by The Mound of Sound at 7:25 AM

The disaster in the Gulf of Mexico occurred a short time ago; and communities are still cleaning up the mess.

The warnings are all over the place. But our government -- who claimed in 2008 that there wasn't going to be a recession -- isn't watching or listening.

Exxon still hasn't fully cleaned up Prince William Sound from the Exxon Valdez catastrophe. But the critical distinction is that, like the Gulf of Mexico fiasco, both of those involved conventional crude oil. What that fiend Harper is intent on pushing out of Kitimat are supertankers laden with bitumen. That stuff doesn't float about to be dispersed through normal wave action. You can't boom it. It sinks and gels up so it can leech out acids, carcinogenic heavy metals and other toxins for years, probably decades. Consider it permanent, untreatable poisoning of an entire ecosystem.

Just like our BC Ferry that is still sitting on the bottom...

Exactly what went through my mind. My sentiments exactly. Cheers

Imagine a northern settlement normally isolated transforming into a thriving community enjoying their prosperity. Imagine families who know that their children can leave when they finish school to attend university and pursue careers that you people in your beehive existence on the lower mainland who think you have the right to make our decisions for us, take for granted!

Ah, an Enbridge troll! My first. Now, go fuck yourself.