When Is America Truly #1? When It Screws Up. 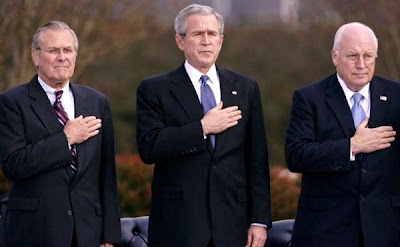 All the King's horses and all the King's men cannot save America from its own stupidity.   There are many examples of American hubris but one that stands out is the legacy of Dick Cheney's frolic in Iraq.  Asia Times has published an interesting overview of America's greatest, perhaps its conclusive, strategic defeat in the Middle East.

"The US's major mistake in Iraq - in stark contrast to the United Kingdom during its colonial quest - is that it tried to engage in "regime change", where the entire state structure of the old regime was not superseded but destroyed. Later, the US tried to restore it, but the damage was irreversible.

"Secondly, Washington, following the dictum that democracy should spread to any part of the world, launched what were the freest elections in Iraq's history. Both decisions were grave mistakes and led to disaster, at least from Washington's perspective.

"The destruction of the state unleashed anarchy and a milieu where jihadis and other extremists could flourish. The election led to the Shi'ite majority - with its strong pro-Iranian sympathies - gaining power. Then the only force that would have been able to stabilize Iraq and prevent it from becoming Iran's proxy - US troops - left. .

"With an industrial base in the process of erosion and mounting debt and budget cuts, the hands of Washington were tied; and it would be naive to attribute the withdrawal from Iraq conducted recently to the naivete of President Barack Obama."

"...With the US's departure, a trend where Baghdad was drawing closer to Tehran has intensified, and Iraq supports the regime in Syria - Tehran's proxy.

"At the same time, Sunni violence, with the possible participation of jihadis, has intensified. This also could be said to a lesser degree about the Kurds, who have not lost hope of building an independent state.


"This process has provided an opportunity to Sunni jihadis, the enemy of not just Prime Minister Nuri al-Maliki's government but also that of his masters in Tehran.

"Moreover, they could well reinforce the Taliban movement in Afghanistan, who are the enemy not just of the US but also of Iran. It is not surprising that Iran has engaged in moves not just to prepare for a potential war with the US/Israel but also started maneuvers near its borders with Afghanistan."

American arrogance engineered its own defeat in Iraq and the Middle East.   Cheney-Rumsfeld thought their tidy little war would be over in as little as 60-days.   Wolfowitz told Congress the cost would be nominal - a few tens of billions - and would essentially be recovered out of Iraq oil deals.   These miscreants ignored warnings, even retaliated against those who would speak truth to their power.

Iraq today is the inevitable hellspawn of the union of religious fundamentalism, ideological radicalism (neo-conservatism),  a rampant military-industrial complex, and a corrupt, bought and paid for government.   It speaks of a people who no longer understand their own nation, a people rendered inert by a force-fed diet of fear and anger.
Posted by The Mound of Sound at 9:28 AM

This is exactly what Hans Blix perported would happen. Did anyone listen...no. The United States is engrossed in deep, deep willful blindness alor.