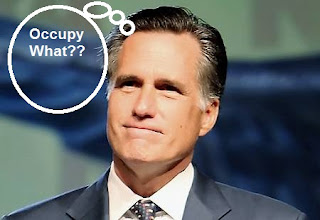 Barack Obama seems to have found Mitt Romney's petard.  Now if he can only light the fuze.

The petard, or bombshell, is the issue of income inequality in America.   While Harperland is doing its best to widen the gap between rich and poor, we still rank well behind our American cousins.   But a recent Pew poll found that nearly two out of three Americans have clued into the reality of the class war that has overtaken their country and that it's their side that's been taking fire.

And this is where Magic Undies Romney has left himself, er, exposed.    Confronted with the challenge of America's inequality crisis, the one that's fueling the Occupy movement, Romney scrambled to Republican safe ground with these politically-loaded gaffes:

"You know, I think it’s about envy. I think it’s about class warfare. When you have a president encouraging the idea of dividing America based on 99 percent versus one percent, and those people who have been most successful will be in the one percent, you have opened up a wave of approach in this country which is entirely inconsistent with the concept of one nation under God."

And he didn't hesitate to put the other shoe in his mouth either:

"I think it’s fine to talk about those things in quiet rooms and discussions about tax policy and the like. But the president has made it part of his campaign rally. Everywhere he goes we hear him talking about millionaires and billionaires and executives and Wall Street. It’s a very envy-oriented, attack-oriented approach and I think it will fail."

Oh Mitt, you've identified the target - the One Per Cent - and you've put yourself firmly in their camp (which is where you actually are in terms of your own wealth).   Unfortunately that 1% doesn't yet have the political power to get you elected although they'll sure try.

Once again the Mittster reveals the political instincts of a boar hog.  Public opinion on this issue seems to have already reached critical mass.  It has traction.  That suggests it could be a powerful theme on voters' minds come November.  Oopsie!
Posted by The Mound of Sound at 8:14 AM

Wow! This can be one particular of the most helpful blogs We've ever arrive across on this subject. Actually Great. I am also a specialist in this topic so I can understand your hard work.
CamelBak Zoid Hydration Pack