Where Is America's "Reset" Button? 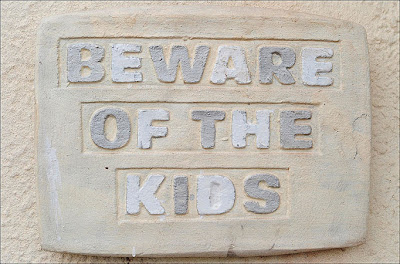 There's over the top and then there's "over the top" American style.  Perhaps it's all just part of America's transformation into a full-blown warfare state but an article in today's Guardian reveals just how debased some parts of the US have become.   The item chronicles the increasing number of American schools that have full time police officers patrolling their corridors charging kids criminally with misdemeanors for outrages such as swearing or even throwing paper airplanes.

Each day, hundreds of schoolchildren appear before courts in Texas charged with offences such as swearing, misbehaving on the school bus or getting in to a punch-up in the playground. Children have been arrested for possessing cigarettes, wearing "inappropriate" clothes and being late for school.

In 2010, the police gave close to 300,000 "Class C misdemeanour" tickets to children as young as six in Texas for offences in and out of school, which result in fines, community service and even prison time. What was once handled with a telling-off by the teacher or a call to parents can now result in arrest and a record that may cost a young person a place in college or a job years later.'

"We've taken childhood behaviour and made it criminal," said Kady Simpkins, a lawyer who represented Sarah Bustamantes. "They're kids. Disruption of class? Every time I look at this law I think: good lord, I never would have made it in school in the US. I grew up in Australia and it's just rowdy there. I don't know how these kids do it, how they go to school every day without breaking these laws."

Americans have always feared creeping socialism but perhaps they should be more concerned with creeping feudalism.   Any society that doesn't see this sort of excess as abhorrent is embarking on a very dark path.
Posted by The Mound of Sound at 8:40 AM

Of course it never occurs to them that other societies are not so terrified of "crime" that they have full-time police officers in grade schools.

Truly a sad state of affairs. Childhood has become illegal.

Apparently if Stalinist Russia comes calling without the veneer of being "for the people", it's magically okay. Scary.