The Hypocrisy of the Petro-State 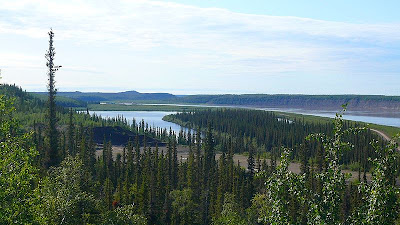 "It is a pitiless, one-sided, mechanical view of the world, which elevates the rights of property over everything else, meaning that those who possess the most property end up with great power over others. Dressed up as freedom, it is a formula for oppression and bondage. It does nothing to address inequality, hardship or social exclusion. A transparently self-serving vision, it seeks to justify the greedy and selfish behaviour of those with wealth and power."
That is The Guardian's George Monbiot's explanation for why Libertarians (along with leading Republicans, the Tea Party, and rightwing think tanks not to mention Alberta and Canadian legislators) are bound to reject meaningful climate change action.
But Monbiot cites a piece written by Matt Breuning that eviscerates the Right's hypocritical "do as I say, not as I do" arguments.  Breuning writes:
Coming onto my property without my consent is a form of trespass under this picture. Doing anything to my property — whether it be painting it, dumping stuff on it, or causing some other harm to it — is totally off limits.
So environmentalists point out that carbon emissions are warming the planet, one consequence of which is that harm will be done to the property of others. Most environmentalists — being the leftists that they generally are — do not make too much of the property rights issues, but one certainly could. Coal plants release particulates into the air which land on other people’s property. But no permission is ever granted for that. Coal plants do not contract with every nearby property owner to allow for them to deposit small amounts of particulate matter on their neighbors’ land. They are guilty of a form of property trespass.

Beyond that, all sorts of industrial processes have environmental externalities that put things into the air or the water that ultimately makes its way into the bodies of others. This is a rights-infringing activity under the procedure-focused libertarian account. The act of some industry is causing pieces of matter to land on me and enter into my body. But I never contracted with them to allow them to do so.

... No story about freedom and property rights can ever justify the pollution of the air or the burning of fuels because those things affect the freedom and property rights of others. Those actions ultimately cause damage to surrounding property and people without getting any consent from those affected. They are the ethical equivalent — for honest libertarians — of punching someone in the face or breaking someone else’s window.

And this is particularly true for rash and hazardous, greed-fueled, environmental degradation of the Athabasca Tar Sands sort.   What possible right do they and their sponsoring governments have to dump massive amounts of greenhouse gas into the air, to pour carcinogens into the local water, to leave in peril the MacKenzie River watershed, the world's third largest?   By what right do they now threaten to threaten with devastation British Columbia's coastal waters?

Every argument they make is grounded, not in principled rights and fairness, but in hypocritical privilege.   They demand that of which they would deprive others without their consent.   It is their Big Money double standard that makes the Tar Sanders and every government and party that props them up, including Libs and NDP alike, a disgrace to our country and our people.
Posted by The Mound of Sound at 8:01 AM

Yes, and any environmental rules, regulations and laws that stand in their way will be crushed. I fear that the next step will be to place a dollar value on the natural world, such as the "green GDP" to be discussed at Rio+20. If this happens, the natural world will be "managed" by bankers and corporations.

Climate change may force us to finally realize that the natural world is the life-support system of all plant and animal species on the planet, not our storehouse of natural resources. Unless we place the environment first, before jobs and economic growth, I don't see how there can be any political solutions.