Why No One Ever Wins in Afghanistan 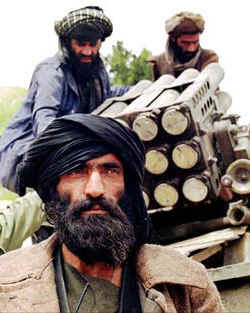 Afghanistan defines the notion of "wheels spinning within wheels."  It is the very home of policy chaos where virtually every action invites blowback of one or more kinds, usually unforeseen.  This brief paragraph from Asia Times aptly captures this quagmire factory:

"The [current] war in Afghanistan involves Pakistan against India, China against India, the Pashtun Afghans against the northern peoples, Saudi Arabia against Iran, and Russia against China. So arcane and intricate are these conflicts that the US is allied with enemies and at odds with allies."

The important question is not how this war, our war, ends but what will the next war look like?  Who will be the players once we walk away from the table?   It's entirely conceivable that the United States will want to keep playing.   The Caspian Basin oil and gas riches are too hard to give up and now there is a lot of interest in developing oil and gas reserves in Kazakhstan and Kyrgyzstan.   When you've got strategic rivals like China and Russia also determined to control those very assets, you can't afford to sit out the next hand.

That's not to say that China and the U.S. or Russia will go to war with each other in South Asia.   Their participation is much more likely to be through surrogates or proxies.   The U.S., for example, knows the importance of Pakistan but risks being displaced by China which knows a direct land route to Iran when it sees one.

If China moves to give Pakistan what it most wants, powerful protection, that's bound to give India fits but it's unclear how the U.S. will be able to overwhelm Russia's decades-long support of India.  That one is definitely up for grabs.

Then there's the looming water conflict that may drag India, China and even Pakistan into confrontation.

And, in Afghanistan itself, as in collapsing Iraq, the central government has failed to reconcile ethnic disparity and distrust.  The peoples of the north - Tajik, Uzbek, Kazakh, Turkmen, Hazara and others have largely ruled the roost over the majority Pashtun of the south.   These northern tribes see the Pashtun as placeholders for the Taliban.   So post-U.S. Afghanistan, like post-U.S. Iraq, seems perfectly poised for a resumption of their unresolved civil war.

As Asia Times noted, it's hard to imagine winning anything when you find yourself allied with your enemies and at odds with your allies.
Posted by The Mound of Sound at 9:13 AM

Maybe they aren't looking for long-term stability in the area under a democratic government, but are following the more traditional steps of warfare. Loot. Pillage. Burn.

Once the well-connected corps get enough money, leave the area and let it burn down around your enemies (and non-corporate allies that you don't really care about anyways).

I'm inclined to agree, Anon. Disaster capitalism seems to be on the rise.