What Keeps the F-35 From Crashing? 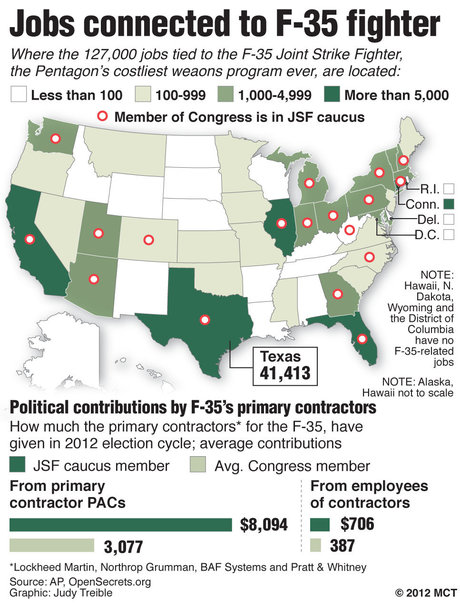 Lockheed has mastered the game of spreading around a government's money to see to it that government has to keep sending it more money.   Not socialism exactly, but...

The jet fighter is needed to replace aging U.S. military planes, but — already the most costly weapons system ever, at $385 billion and rising — it might be more expensive than the nation can afford.

Despite criticism from defense secretaries, government investigators and powerful senators, the Pentagon still wants the Joint Strike Fighter — but the Defense Department might want more plane than it needs.

"A lot of times, the Pentagon just wants to sexy these things up and make them do wow stuff when wow is not required," Sen. Lindsey Graham, a South Carolina Republican who sits on the Senate Armed Services Committee, told McClatchy.

In the current budget crisis, with the Pentagon facing $1 trillion in possible cuts, the F-35's high price tag makes it a prime target. But thanks in part to campaign contributions from its main contractors and their jobs spread across the country, the fighter plane has its own congressional caucus of 48 lawmakers dedicated to saving it at all costs.

In releasing the Pentagon's budget priorities this month, [Defense Secretary Leon] Panetta restated the Defense Department's commitment to the troubled Joint Strike Fighter while delivering an endorsement that felt more like kissing a second cousin.

"In this budget, we have slowed procurement to complete more testing and allow for development changes before buying in significant quantities," he said.

It was the third slowdown in as many years for the beleaguered program.

Read more here: http://www.mcclatchydc.com/2012/01/30/137359/f-35-story-shows-why-its-so-hard.html#storylink=omni_popular#storylink=cpy
It seems America's defence industry has joined the ranks of the country's banks and Wall Street, too big to fail.   The all too flawed F-35 will limp along.  Because of its political backing, it may even survive the emergence of technologies that neutralize its supposed stealth cloaking.

What else is new?