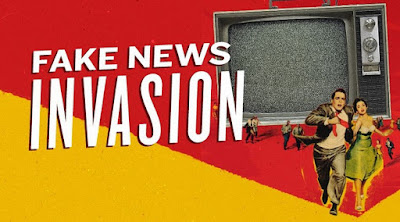 Is the crisis of "fake news" just a symptom of neoliberalism's looming collapse?

An excellent essay by Evgeny Morosov in The Guardian looks behind the fake news phenomenon and its corrosive effects on democracy.

Will the fake news crisis be the cause of democracy’s collapse? Or is it just a consequence of a deeper, structural malaise that has been under way for much longer? While it’s hard to deny that there’s a crisis, whether it’s a crisis of fake news or of something else entirely is a question that every mature democracy should be asking.

Our elites are having none of it. Their fake news narrative is itself fake: it’s a shallow explanation of a complex, systemic problem, the very existence of which they still refuse to acknowledge. The ease with which mainstream institutions, from ruling parties to think tanks to the media, have converged upon “fake news” as their preferred lens on the unfolding crisis says a lot about the impermeability of their world view.

The big threat facing western societies today is not so much the emergence of illiberal democracy abroad as the persistence of immature democracy at home. This immaturity, exhibited almost daily by the elites, manifests itself in two types of denial: the denial of the economic origins of most of today’s problems; and the denial of the profound corruption of professional expertise.

The first type manifests itself whenever phenomena like Brexit or Donald Trump’s electoral success are ascribed primarily to cultural factors such as racism or voter ignorance. The second type denies that the immense frustration many people feel towards existing institutions stems not from their not knowing the whole truth about how they operate but, rather, from knowing it all too well.
...

The problem is not fake news but the speed and ease of its dissemination, and it exists primarily because today’s digital capitalism makes it extremely profitable – look at Google and Facebook – to produce and circulate false but click-worthy narratives.
...

When think tanks gladly accept funds from foreign governments; when energy firms fund dubious research on climate change; when even the Queen – what a populist, she – questions the entire economics profession; when the media regularly take marching orders from PR agencies and political spin doctors; when financial regulators and European commissioners leave their jobs to work on Wall Street – could anyone really blame the citizens for being sceptical of “experts”?
...

Caught between the two denials, the elites will never stop searching for innovative solutions to the problem of fake news – much as they never stopped searching for innovative solutions to climate change. The two issues do have a certain similarity: just as climate change is the natural byproduct of fossil capitalism, so is fake news the byproduct of digital capitalism.

It won’t take long for some genius policy entrepreneur, fed up with the authoritarian nature of current proposals, to unleash the genius of free markets on this problem. Why not, say, establish a post-truth emissions trading scheme, where news organisations could trade their government-issued fake news permits? Ridiculous, yes; ineffective, yes – but the scheme would surely receive major social innovation prizes.

The only solution to the problem of fake news that neither misdiagnoses the problem nor overpowers the elites is to completely rethink the fundamentals of digital capitalism. We need to make online advertising – and its destructive click-and-share drive – less central to how we live, work and communicate. At the same time, we need to delegate more decision-making power to citizens – rather than the easily corruptible experts and venal corporations.
Posted by The Mound of Sound at 11:47 AM

Fake news has been around for a long time. We prefer to call it graffiti, pornography and/or satire. It flourishes when those at the bottom are under stress. Think of all those pornographic cartoons of Louis XVI just prior to the French Revolution.


I wasn't aware of that, Toby. And, for what it's worth, I'd rather not dwell on the idea. Really, they did that? Wow.

Mound, I have this vision of some scholar spending a lifetime decoding an obscure hieroglyphic only to discover that it says, "Pharaoh sucks!"

But, as you say, don't dwell on it. What is more important is that fake news, in any form, signals discontent among the masses. Failure by the elite to pay attention can lead to revolution.

BTW, I'm reading Thieves of State by Sarah Chayes. Hers is an important observation which those in power will ignore.

Toby, do let me know what you think of Chayes' book.

I have some interesting magazines published in WWI on what can only be described as newsprint.
The magazine documents the weekly news from the "Front".
I stupidly gave a couple of the magazines to the local military museum some years ago , the magazines documented the participation of Canadian First nations in that conflict.
The magazines show that false news has been around forever.
In retrospect they show a disgusting lack of morality by those "in power"; the decision makers.
I have many other old publications including ;
Famous Men, published in the early 1900's.
Amongst the famous men is Cecil Rhodes who is portrayed as an wonderful fellow in this book!
Newer publications I own include a WWII paperback that documents the wonderful "show" at Dieppe!!
Seriously folks you can't make this stuff up!

At least Western endeavours in Iraq are been called to task and even the Bay of Tonkin incident! is being discussed.

The sad thing is that the USA election was influenced by false news from it's own intelligence agency and BC voters re elected a Government on the false news that we would have more jobs in the LNG industry.
False news is everywhere.
Add to this the news that is not reported.
Wantonly not reporting news is in affectively false news .