Courage and Cowardice In The Age of Fear 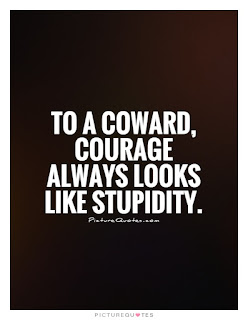 If you want to keep the plebs in line, nothing works as well as a double-serving of fear.

Fear is the weapon of choice of every despot throughout history. The best part is how easy fear is to fabricate and then inculcate.

Chris Hedges visits the subject in his latest essay:


The more despotic a regime becomes, the more it creates a climate of fear that transforms into terror. At the same time, it invests tremendous energy and resources in censorship and propaganda to maintain the fiction of the just and free state.

Poor people of color know intimately how these twin mechanisms of fear and false hope function as effective forms of social control in the internal colonies of the United States. They have also grasped, as the rest of us soon will, the fiction of American democracy.

Those who steadfastly defy the state will, if history is any guide, be decapitated one by one. A forlorn hope that the state will ignore us if we comply will cripple many who have already been condemned. “Universal innocence,” Solzhenitsyn writes, “also gave rise to the universal failure to act. Maybe they won’t take you? Maybe it will all blow over.”

Resisting despotism is often a lonely act. It is carried out by those endowed with what the theologian Reinhold Niebuhr calls “sublime madness.” Rebels will be persecuted, imprisoned or forced to become hunted outcasts, much as Chelsea Manning, Julian Assange and Edward Snowden are now. A public example will be made of anyone who defies the state. The punishment of those singled out for attack will be used to send a warning to all who are inclined to dissent.

Demagogues, Solzhenitsyn reminds us, are stunted and shallow people. “Unlimited power in the hands of limited people always leads to cruelty,” he writes.

“The overall life of society comes down to the fact that traitors were advanced and mediocrities triumphed, while everything that was best and most honest was trampled underfoot,” he observes. Ersatz intellectuals, surrogates “for those who had been destroyed, or dispersed,” took the place of real intellectuals.

“After all,” Solzhenitsyn writes, “we have gotten used to regarding as valor only valor in war (or the kind that’s needed for flying in outer space), the kind which jingle-jangles with medals. We have forgotten another concept of valor—civil valor. And that’s all our society needs, just that, just that, just that!”

.. some great 'premise' in this essay, thanks... & more and more I see where that 'civil valor' becomes crucial for our Canadian culture.. and deserves mainstream media attention.. (OK.. so I'm an Idealist..) We have seen this at Standing Rock & we've seen it at Bella Coola & there are examples everywhere, but only if we are aware or challenge 'Media' to stop shoving Trump Pence & Kelly-Anne down our throats, or the mincing proclamations of Kellie/Kouvalis Inc or O'Leary, Rempel, Raitt et al rising to save Israel from the barberian hordes

We are not going to find much 'valor' in the partisan political realm.. its about advance polls, exit polls, vote supression & manipulation. It the realm of Peter MacKay.. Rona, Christy.. Its all about the spin n hype... and distortion of any remaining shred of Democracy. Cananyone explain Harper's prorogues or omnibus bills? Christy Clark shuttering BC's legislature or Site C, or the M'Guinty gas plant scam? How about Justin and the Kinder Morgan game? Oh, the National Interest of Asia eh?

We need to find and support the valorous... and they will be teachers, firefighters, truck drivers, housewives, students, nurses, loggers.. those ordinary Canadians that day to day make Kellie Leitch look like an idiot.. and her shouty n snouty CPC fakey friends.. The Van Loan's & Boessenkools etc

Sarah Chayes, talks about the relationship between good governance and security. Good governance is necessary or there will be much insecurity. Those in power tend to get it backward and enforce security without supplying good governance. That's tyranny.

Aside to Mound: I'm just in the beginning of the book - will let you know what I think at the other end. So far I think it is important.

Hedges talks a fair bit about the 'sublime madness' in his latest book, which I just finished. He sets an example for all of us; uncompromising in his views, he invites us not so much to parrot his positions as to ask ourselves where we stand on them. It is clear, after reading the book, that his theological training prepared him for a ministry he never formally took up, but nonetheless a ministry that has defined his career.