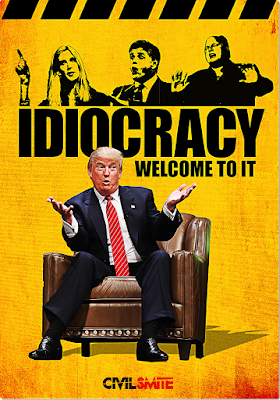 Apparently humans have a tricky little gene deficiency that works to make us a slight bit dumber, generation by generation.

Geneticists in Reykjavik find that certain genes that predispose people to "hit the books" are in generational decline.

They've also found that those who are inclined toward education also have lower rates of reproduction.

Great, more proof that Idiocracy isn't a satire. It's a documentary.
Posted by The Mound of Sound at 9:51 AM

Now I understand, Toby. The report offers no explanation for the apparent decline in this particular set of genes. And it is an Icelandic specific study. Maybe it's something that lurks within their genetic makeup from the Viking era.

Mound, this subject was noticed 50 years ago although it was not tied to genes. Civilization goes through periods when education is valued and other periods when it isn't. I think it quite possible that we are headed for another dark age.

I doubt that genes are the cause. They may show the result.

Of course, there are the Darwin Awards. "The Darwin Awards salute the improvement of the human genome by honoring those who accidentally remove themselves from it..."


Forgive me if this sounds/is gauche but I've been wondering lately whether, as a species, mankind doesn't require some sort of self-culling mechanism to aid in evolution. I fully realize how horrible that idea sounds and I know I should feel ashamed. It's just that it seems to me that civilization is in dire need of an intellectual renaissance and we need it before the clock runs out.

In the absence of selection pressures from warfare or plague or what have you, I presume humans select for hotness when it comes to breeding. So take comfort--humans may be gradually becoming stupider, but they are probably getting better looking.
Anyhow, I really doubt these genetic stories about genes for studying. If they're selected against now, when would they ever have been selected for? If people are getting dumber I expect pollution-related effects (starting with lead and moving on through thousands upon thousands of chemicals many of which we have no idea what metabolic effects they might have, if any) to be swamping any genetic impacts.