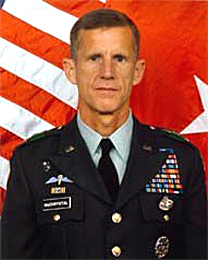 If he hadn't been loose lipped in his criticisms of Barack Obama, Stan McChrystal might have made Chief of Staff of the United States Army. Loose lips sink generals even more assuredly than they claim ships.

Still and all, Stan has a bit of wisdom to pass along. Two points. Don't ever think a new European war isn't possible, and, be prepared to give up basic civil rights to the unstoppable progress of technology as the price of security.

Just like the old days when people did their lord's bidding to be able to live within the town's fortified walls.

On how we got Afghanistan wrong - from the get go.

Not only did we not understand the culture of Afghanistan, but we did not really understand the players in Afghanistan—the former warlords, the leaders that had fought against the Soviets—who had become such important players once the Taliban regime was defeated. Although we understood in very broad strokes the Pakistani and Iranian positions, we didn’t understand the nuances; we didn’t understand the long-existing issues and concerns that they have. So as we started to execute a policy that on a superficial level seemed very logical, we ran into pressures, forces, interests, and equities of people that are, I won’t say immovable, but very difficult to move. The entire western world was very surprised by that or at least unprepared to deal with it. Afghanistan in particular was a case of finding a problem of much greater complexity, much deeper roots, and much more difficult issues than we appreciated.

On Syria, America snagged on its own history.

In retrospect it’s clear that one of the things we are paying a high price for is reduced American credibility in the region. After 9/11 initially we responded very forcefully both militarily and diplomatically. But then we showed the region just how long the dog’s leash was. Once they saw not only all that we could do but also all we could not, or would not do, they saw the limits of American power and the limits of American patience. Suddenly our ability to influence the region declined. And as we started to show political fatigue and frustration, people in the region started to make new calculations. If you look at the behavior of the various countries—some former allies, the Saudis for instance—they have recalibrated their relationship with us and their role in the region, because they perceive that going forward the United States will have a different role than in the past. That has weighed very heavily in Syria. We have signaled very precisely all the things we will not do. Once you signal all the things you will not do, your opponent has the luxury of saying, “I know where my safe zone is.” That was probably a mistake. There needs to be some ambiguity about what we will and won’t do so that our foes are in doubt, and don’t know where we’ll stop.

What's that, Stan? Saudi Arabia is now a "former ally"? Did anybody send the memo to Justin?

There are two characteristics of concern. First is the reemergence of great power nationalism; the rise of China, the reemergence of Russia, both with enough power and self-confidence to go back to traditional nationalist objectives. Russia is trying to move back into areas in Ukraine and perhaps even into the Baltic States, to try to reassert itself. That is a natural ebb and flow of power going back hundreds of years. I don’t think we saw the end of history in 1989; rather we are back on the track of history. Russia and China are major factors, and they are enough that we might not be in a post-modern period of history. A European war is not unthinkable. People who want to believe a war in Europe is not possible might be in for a surprise. We have to acknowledge great power politics; we can’t pretend they are gone.

The second area of concern is that technology and globalization have been great equalizers. Modern technology has given individuals extraordinary power. An individual with an automatic weapon can be extraordinarily lethal. An individual with a weapon of mass destruction, or a small number of drones or precision weapons can be extraordinarily lethal. Everyone now has precision strike capability; you can buy a cheap drone and put a hand grenade on it and you’ve got precision strike. It’s really difficult to defend against that. Suddenly the security situation has changed; anyone with a keyboard is a cyber warrior. The problem with the rise in power of these individuals—which really didn’t exist in the past—is that individuals in very small groups have a disproportionate ability to act. But they don’t have the vulnerabilities of a nation state. Nuclear power and nuclear strategy were always based on holding each other at risk. The problem is you can’t hold an individual or terrorist group at risk because you might not be able to find them—or they may not care. As a consequence, deterrence in its traditional sense doesn’t work. How can you prevent people from doing harmful things if you can’t deter them? In law enforcement it’s the risk of being caught and put in prison. A terrorist group might not care about being caught, or being imprisoned. They may not even care about dying. The only deterrents available are either massive protection—enormous amounts of security—or some way to identify and either persuade them or physically prevent them from acting.

We have never faced this challenge before. Technology has created the problem because it empowers individuals to do unprecedentedly destructive things. On the other hand technology empowers society to track and monitor people as never before. We are beginning an era in which our ability to leverage technology to track people and control populations is going to create a lot of tension; I think we are going to see a lot more population control measures. We are going to have to give up a lot more of our precious civil rights than most of us imagine because we want security. In other countries that haven’t had the freedom that we have, they may not notice as much, but we are entering a period where we will have to make those choices. And the choices are likely to go in the way of surrendering civil rights for security.

Thus endeth the sermon. Go and sin no more.

Americans (and Canadians) have a poor understanding of the history, even recent history, of countries in far away places. When something goes awry the instinct is to shoot and/or bomb when the logical first action should be to go to the library.

It's called "hubris" Tony and the ancient Greeks knew it was always followed by nemesis.

Bush II handed Afghanistan over to the Warlords, Drug Lords and War Criminals at the first Loya Jirga, over the objections of the Tribal Elders and actual Progressives,

All in their rush to invade Iraq.

Gotta LMAO when US Generals and ex-Generals pontificate.

Seems to me he's saying what Robert McNamara said about the North Vietnamese. We didn't know who we were dealing with.

Trump knows better than all of them put together anyway. Alex Jones told him so.

This constant narrative of American citizens having to give up their civil rights for security Mound is now,with Trump as President coming to fruition. The implicit police state, will become very explicit.

The domination of other countries through force and the plundering of these countries wealth, by American imperialism, is being done overtly by America's newest demagogue, Donald Trump.

The American peoples indifference and ignorance about the criminal war crimes that their government has been and still is causing around the world, is now taking place on their home turf.

Canadians too are very vulnerable to their own PM and government running roughshod over our civil and human rights. My guess, with bill C-51, is that they will do a few cosmetic changes, while essentially keeping it fully intact for their own use.

What Americans need is basic intelligent sermons about Civil War ..
as that's where I see the Trump Regime & Era headed..

Of course, something horrendous will come along
and Trump Inc et al will try to don a righteous cloak of wonderfullness
Some horrific terrorist act - domestic or international
That's a given.. but mark my words.. that act of terror ?
That will be a cleverly designed strategic strike..
to throw The US of A into disarray.. and chase its tail
David vs Goliath if you will ..
Yes, a stone to the very forehead of the great Cowardly Bloat

In some ways.. OK, many.. I just wish it would all get underway,
lickedy split, bring it on, its not Queensbury Rules
Like why wait.. who needs the big windup and posturing?
When a major league pitcher throws a 'purpose pitch'
its the 1st pitch.. not somewhere in the middle of the count..
That's the whole point of such a pitch

Right now up in Canada eh.. we are treated to a bloated Fraud
who lies his ass off on a daily basis.. signing Executive Orders
and waving them at the cameras.. as a show of his 'power' ..
He does not understand the Rules for Fools.. aint Queensbury

More like Paul Newman explaining the Kansas City Rules of fighting
while delivering a kick to the gonads.. that nobody arises from
This aint Fight Club or Fairy Fight Club.. or Trumph Wonderland
Its down at ground level, up close and personal
and any terrorist strategic strike.. will not be designed to unify America
Far from it.. it will be to divide it into friction, fraction and futile lashing out..

This won't be pretty.. the question will be.. is it surviveable ..


@ Toby
Americans (and Canadians) have a poor understanding of the history, even recent history,

Not understanding history is a universal trait.
Taught history is usually based upon current politics not facts.
When a dictator controls a country he or she frequently dismisses the humanities so to assert control.
Turkey and the USA come to mind!