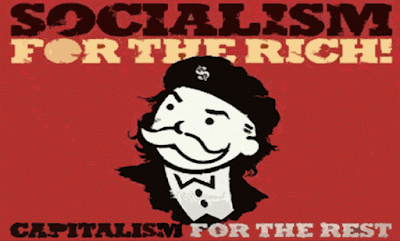 When Big Fossil has squeezed out the last bit of profit, they often just leave the taxpayer holding the bag for the clean up. The treasure is shifted out of Canada and then the operating company, usually a subsidiary, is put into bankruptcy. In this way Alberta is now sitting on 1,400 abandoned "orphan" gas and oil wells in need of clean up.

Naturally, the Oil Patch has an idea - get the Alberta and federal governments to pick up the tab.

Investment banker Ian Thomson, along with the Petroleum Services Association of Canada (PSAC), is pitching an idea to the federal government he thinks can help put people back to work — inject some capital in the junior oilpatch and make a dent in the number of inactive wells in the province.

Thompson and PSAC want the federal government to consider including in the next budget what they call a Sustainable Environmental Energy Investment (SEEI) fund for smaller oil and gas companies.

For every dollar invested in one of these companies, 47.5 cents could be spent on drilling and exploration, but the rest must be used to clean up old wells.

...Individual investors would be able to write off the full investment against their taxes, which means lost tax revenue for provincial and federal coffers.

These kinds of funds have been used for decades to promote development of Canada's natural resources. They are quite attractive to investors but less so to the government.
Posted by The Mound of Sound at 9:08 AM

The sad fact is that if the government forced carbon companies to pay for their externalities instead of subsidizing them, that many would not be viable, the price of carbon fuel would rise, we wouldn't need a carbon tax and consumers would make better choices.


It's those "externalities", Toby, that largely account for the discrepancy the Canadian government subsidies to the fossil energy sector. The feds and promises admit to just over $3-billion annually. The International Monetary Fund, however, pegs the total subsidy at $34-billion. Just ever more bullshit from our federal government.