The View from Germany 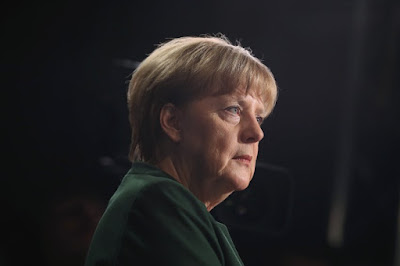 The opening line in Der Spiegel says it all:  "Doubts are growing inside Angela Merkel's Chancellery that the incoming American president will mature and become a statesman. The chancellor is preparing for frosty trans-Atlantic relations while at the same time trying to pull Europe together."

Think about that. Angela Merkel doubts that a 70-year old man "will mature and become a statesman." Hmm. If he's not mature at 70 it sounds like a safe bet that he won't become mature later on.

The hour-long video didn't exactly put the German chancellor in a cheerful mood. The footage was from Donald Trump's recent appearance in Pennsylvania during his so-called Thank You Tour and Angela Merkel, as she told the national executive committee of her center-right Christian Democratic Union (CDU), watched the rally in its entirety. She recommended that her fellow party members do the same. "It is interesting to see the thought environment he inhabits," she said.

During his speech, Trump celebrated a landslide victory that was anything but; he blasted the press ("the world's most dishonest people") and in no way left the impression that he has matured into a statesman following his election win. But one passage really stood out in Merkel's memory and she quoted it verbatim: "There is no such thing as a global anthem, a global currency, a global flag. We salute one flag, and that is the American flag."

Internally, she makes no secret of what she thinks about Trump's campaign. No other presidential candidate in the history of the United States has ever violated the rules of decency to the degree that Trump has. That's how Merkel sees it. That helps explain why, in a brief statement given to the press following his Nov. 9 election, she held the kind of moral sermon that no previous German chancellor had ever delivered to a US president.

She said that "Germany and America are connected by values of democracy, freedom and respect for law." She then offered close cooperation with the next president on the "basis of these values." It was the language of a parole officer trying to get her charge back on the right track. Merkel didn't just say this publicly -- she also repeated it during an hour-long telephone conversation with Trump on Nov. 11. The future president remained friendly, but was apparently thoroughly unimpressed.


It's Trump's character that worries Merkel most, his craving to be loved and admired and his fury against all those who refuse to do so. Merkel has been in office for 11 years and she knows very well just how unstable the world order has become. "Many have the feeling that the world has been turned upside down," she said at the CDU's annual party conference at the beginning of December. It was a tone that one seldom hears from Angela Merkel.

The chancellor is fully aware of what is at stake. If Trump carries out even part of what he promised during his campaign, then the world order as Merkel knows it would be relegated to the dustbin of history. The messages that Merkel's emissaries have been given by Trump's people so far haven't been particularly encouraging. They have reported that the new president will make his decisions based solely on domestic policy considerations. His foreign policy will be dictated by how his decisions will be seen by voters at home.

Trump also has a penchant for dismissing the warnings of his advisers and allies. This creates the additional problem that efforts to coax or even pressure the new president may have the opposite of the intended effect. "To Trump, what matters is not if his decisions are coherent, but how they are perceived," says one diplomat who represented the German government in Washington.

Small wonder that, in many circles, it's no longer the American president but the German chancellor who is considered the new leader of the free world.
Posted by The Mound of Sound at 12:26 PM

Thanks, Mound, I guess. That's terrifying. One can only hope the Europeans can hold together.

Thanks for posting the link, Chris. I forgot, my bad. But yes, it's kind of worrisome. As for holding Europe (or the world) together, you might want to pass on this interview, in Foreign Policy, with Richard Haass, president of the Council on Foreign Relations who concludes that the international order is finished and, from here on in, it's chaos.


Interesting stuff, Chris. It dovetails with a post I'm working on about Trump's past involvement with Russian oligarchs said to have bailed him out when American financial institutions cut him off.

Jeebus! Have some more!

The documents at Buzzfeed are very interesting, Chris. They include details about FSB "kompromat" from the Ritz Carlton in Moscow featuring Trump in the presidential suite enjoying golden showers with prostitutes. There are lots of details on Manafort's being given kickbacks from the former president of the Ukraine, and Trump's lawyer also seems to have been compromised through his Russian wife.

If true, this is all very damning material. The Kremlin's operation is now blown and I wonder how much control they'll retain. It'll be interesting to see how this all plays out among Republican "patriots."

Be careful folks with the Buzzfeed aspect, the main FP/Sec FPer at Balloonjuice, the one who wrote the post referenced here in comments regarding Kompromat has suggested such, and he has shown to my complete satisfaction that he not only knows his stuff, but takes it all very seriously. I've lurked at BJ for years, so I am very conversant with Adam's works over the election cycle, especially when it comes to the Russian involvement in the election as it was happening. The CNN report, he is completely comfortable with that one. He appended that post referenced later last night to make this point, in part based on the comments in that thread.

What bugs me though about some who want to pretend the Russians are innocent bystanders is much the same thing that bugs me whenever someone argues there is no evidence to support the premise that James Comey cost HRC the election. This despite the reality that when he intervened it wasn't just Clinton's people who sensed she had the big mo coming out of the debates, it wasn't just the media people, it was also the Trump supporters and operatives who were dealing with a candidate flailing around and drowning fast. That interjection, that totally unnecessary unsupported and unprecedented action not only threw the anchor around Clinton, it re-energized Trump, his operatives/staff, and his supporters, and Trump was able to use this action to refocus his entire campaign on this one issue for the last 11 days, and boy was he hitting it as hard as he could. And even then he won by such a narrow vote margin spread among just enough States for the EC win.

Without Comey, that doesn't happen. Before it happened even conservative pundits were saying Trump needed a meteor level political event, a miracle to change the dynamic, well gentlemen to quote Hans Gruber, " You asked for a miracle Theo...? I give you the FBI!" We are all Theo now...*sigh*

What adds to this, and relates directly to Russia is that Comey FUCKING KNEW about the Russian activities and goals for electing Trump when he did this, but he refused to comment publicly on them as he said months ago during Congressional testimony for fear of affecting the election results/campaign. Yet mere days/weeks after he finally publicly signs on with the other intelligence agencies that were saying this, AND that there was real connections between the top levels of team Trump and Russia.

Merkel is exactly right to speak and feel the way she does, and to recognize that the institutions which should be protecting against such instead enabled such. There is no basis for any sane person to believe that the Trump Administration is going to be anything other than a total CF for the world stability, period. That a German Chancellor is in the position to do so to the Americans given how they were freed by the Americans from such within living memory, ell that is just icing on that particular shit cake.

I was somewhat ambivalent about this "dossier" until I read The Guardian's article on it last evening. That was where I first learned this information had been handed to the FBI by McCain. Then the paper reported that a senior US government type had vouchsafed this "source's" reliability and credibility. Then they indicated this individual is well known and trusted in intelligence and "foreign" circles generally.Finally there is enough detail in the reports to allow investigators to fairly easily verify it overall.

As Scotian notes the election night outcome was a huge "upset" win and, even then, it was definitely tainted by Comey's mysterious and as yet unexplained last-minute meddling.

Poor old Assange. It looks like his hopes of ever getting out of the Ecuadorian embassy may be dashed.

Angela Merkel, "leader of the 'free' world". Well, it's better than Trump. But it's a far step from "good".