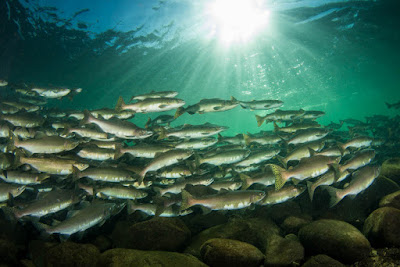 Thanks to the rotation of the Earth and the force of tectonic plates, the Pacific Northwest is rich in hydro-electric power. Moisture-laden air flows in from the Pacific, hits the mountains, unloads the moisture as rain that then flows to rivers and onward to dams where it passes through generators to power the electrical grid.

For decades that hydro-generation has been the mainstay of the region but now it's being eyed to play a different role, as a backstop for the development of alternative, clean energy options such as wind and solar power. These new sources of clean energy are often criticized, especially by the fossil energy industry, as being intermittent and, hence, unreliable. Dams generating hydro-electricity are also criticized, mainly by environmentalists, for blocking the spawning of essential species such as salmon.

Now there's a new, salmon-friendly proposal for the Pacific Northwest or at least the Columbia Basin.

In the near future, the U.S. electric grid will be able to digitally manage the vast Northwest hydroelectric network in a way unimaginable just a few years ago. With consent from customers, it will be able to adjust the heaters and air conditioners of millions of homes and buildings, or tap into the batteries of electric cars or other smart appliances.

It’s a revolutionary change for the Northwest economy, the energy market, and the Columbia Basin dam system and the salmon that migrate through it.

The four dams of the Snake River in Washington are less valuable now due to a power surplus caused by wildly successful energy-efficiency programs, cheap natural gas, and rapidly growing wind and solar energy options.
...

The future of the Northwest’s hydroelectric system will be to augment the ever-growing supply of intermittent low-carbon energy sources like wind and solar. It also will continue to play a crucial role as quick-response electricity at times of peak demand.

But the dams still have strong political and cultural pull. Wheat farmers in Idaho and eastern Washington still depend on shipping their grain and staying competitive in the Asian markets even though shipping on the Snake has dropped more than 70 percent since 1998.

Independent biologists say the $16 billion spent over the past two decades is not enough to offset the effects of the dams and climate change on wild salmon and steelhead. And some already argue that the savings from removing the four dams on the lower Snake River and spending less to mitigate the damage to salmon exceeds the dams’ benefit to the electric grid and economy.

If the four dams are less important to the Northwest electric grid, argues Ben Otto, a Boise lawyer and environmentalist who chairs the Northwest Energy Coalition, they are more critical than ever to the Idaho salmon that migrate down and up the Snake River.

“Removing these dams is very important to allowing salmon a chance to move freely between the habitat they need to live,” Otto said.
...

The Columbia River system once sustained 8 million to 16 million salmon returning annually. But 150 years of overfishing, habitat destruction, dam building and water pollution took its toll. By 1995, less than 800,000 returned, and Columbia Basin salmon were listed under the Endangered Species Act.

photo credit - Eiko Jones, a New Zealander who came to Vancouver Island and developed a technique of underwater "drift" photography of salmon spawning in the Campbell River.