Hardly a day passes when I don't ask if our leaders are crazy, out of their minds. I keep coming back with the same answer - it's either that or something far worse.

There's been a discernible - and welcome - shift in climate science lately. Instead of the constant focus on anthropogenic global warming, many of the leading science types are beginning to recognize that the problems confronting the world include associated issues such as overpopulation and over-consumption. They're all connected, inter-related and each compounds the others.

For example, we know we must sharply slash greenhouse gas emissions starting now, right now. However, when it comes to population and consumption, we're heading in the opposite direction just as far and fast as we can possibly manage. Listen to our prime minister. He almost never passes up an opportunity to champion growth, GDP growth. We must grow the economy, must expand trade. Real, perpetual, exponential growth. And, while we do that, we're going to save the world and slash our greenhouse gas emissions. Only we're not.

This brings us to the theory/reality of the Great Acceleration. This neat video gives you the idea:

For all the challenges that will face the world, including Canada, over the balance of this century, the pursuit of perpetual, exponential growth is akin to a lung cancer patient choosing to go from a two pack a day habit to three packs a day. You would think that person crazy. Why do you think better of your political leadership?

The International Geosphere-Biosphere Programme tracks the Great Acceleration. It's all laid out in handy charts at their home page.  Here are a few that demonstrate what is underway today. 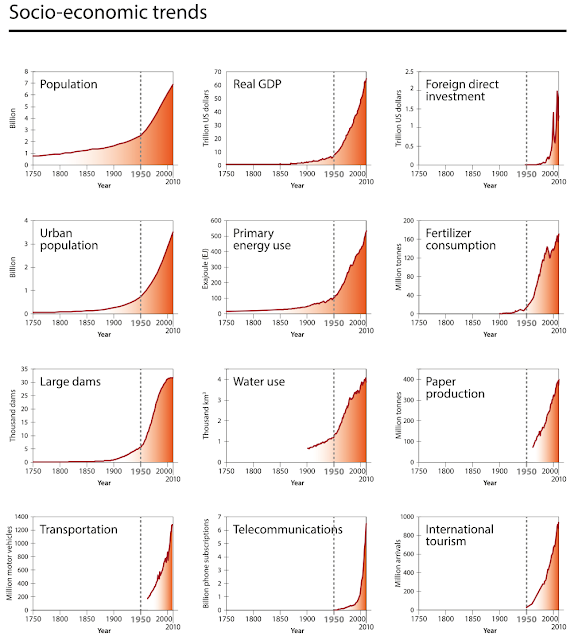 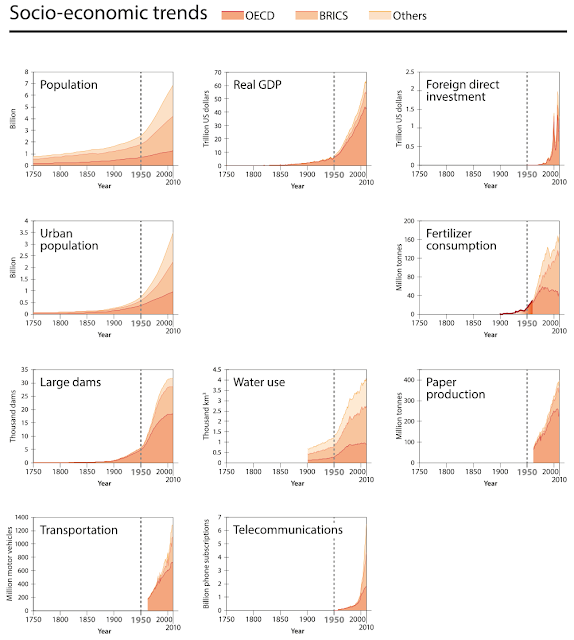 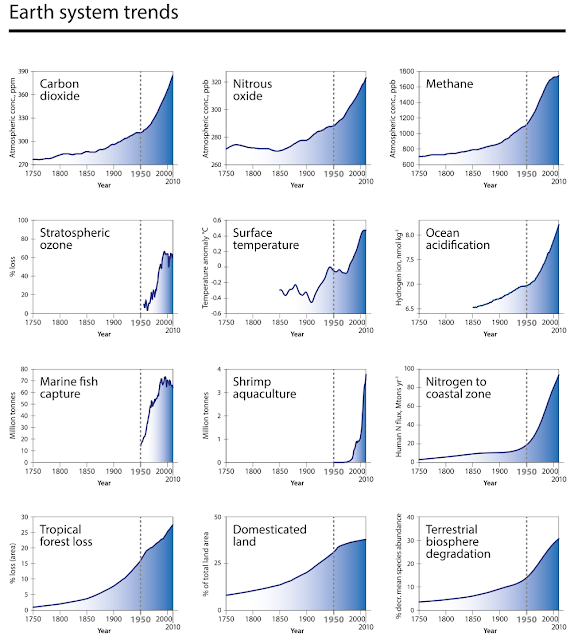 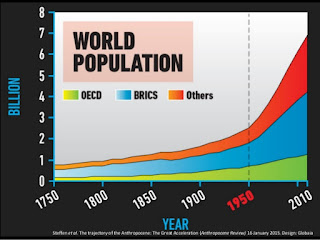 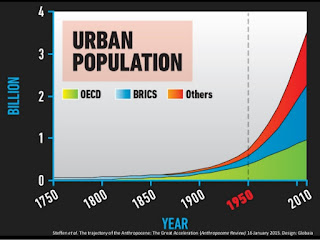 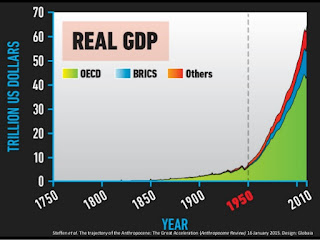 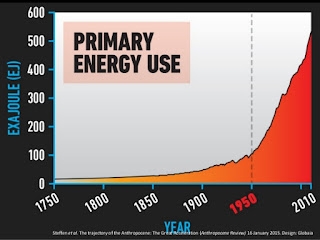 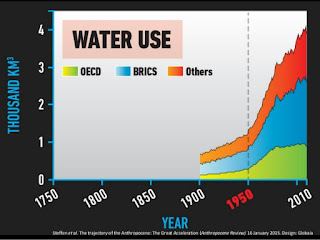 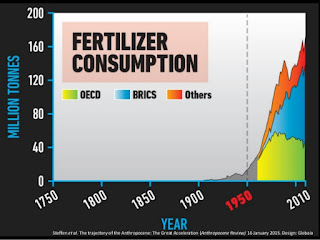 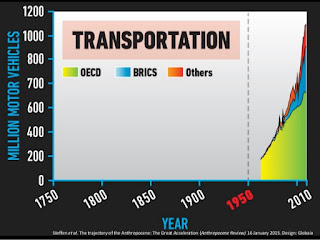 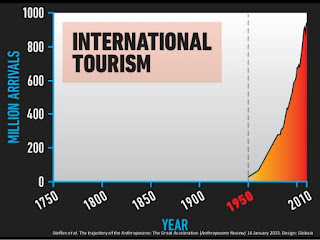 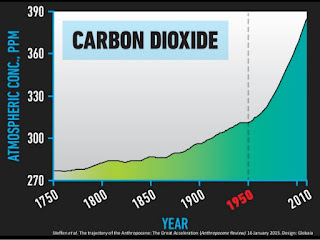 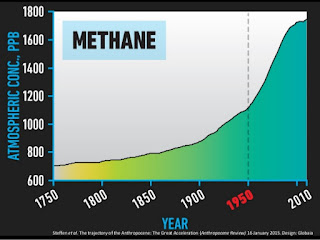 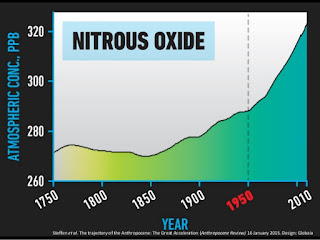 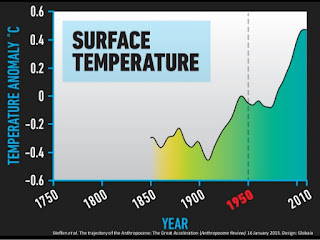 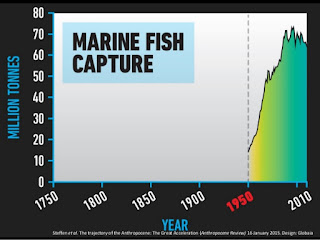 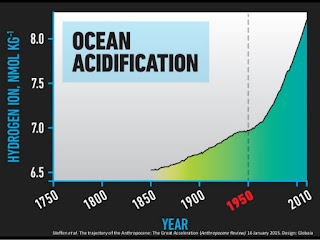 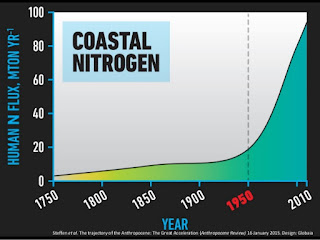 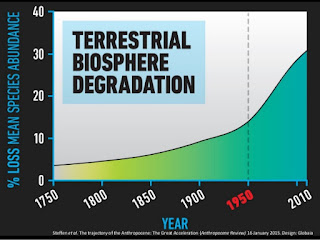 Isn't it curious how all these graphs seem so similar. They all start out low on the left and high on the right, some very high.  At the risk of boring you all I'll repeat that at my birth the global population was in the vicinity of 2.5 billion. Today we're past 7.5 billion heading to 9 billion, perhaps 10 billion. At today's 7.5 billion we're gobbling up the Earth's resources beyond the planet's carrying capacity by a factor of 1.7 and that's a deficit that grows with each year. We would need almost another entire Earth to meet our resource consumption levels.  Only we're stuck with just this one.

We're facing a perilous problem at every level - globally, regionally and nationally. Some now predict we'll be all but wiped out by 2030. Others are more optimistic and forecast our numbers will be in a sustainable range of between 500 million and one billion by 2100. Do the math - 9 billion minus X equals one billion. X represents how many people will have to be eliminated over the next 70 years or so to get us back to what might represent a sustainable population in the degraded world we'll inhabit by 2100.  The Great Acceleration seems to be taking us to a Great Die-Off in the magnitude of 8 billion people.

Despite all this data, all the science, we have a "business as usual" government that pays it not the slightest heed. Our planet is already grossly overstressed yet our government believes a rosy future awaits us in the pursuit of perpetual exponential growth. Does that strike you as sane? Do you think they're crazy, out of their minds? Or do you think there's something far worse in play?

One of the most elusive statistics to hunt down is per capita GDP growth. It is a measure of output but it also reflects energy and resources consumed, production of goods, services and waste. Record keeping in Britain has allowed per capita GDP to be charted from today back to 1270.  The results are impressive. Per capita GDP first reached 2,000 pounds (adjusted to 2013 sterling) in 1832.  By 1900 the Industrial Revolution had swelled that to 4,800 pounds per capita.  The 12,000 pound mark fell in 1970.  That doubled again to 24,000 pounds per capita GDP in the year 2000, increasing to 28,000 just before the crash of 2008. To make sense of this, the average Briton's production increased from 4,800 pounds in 1900 to close out that century at 24,000 pounds per capital GDP. In the course of one century, the 20th, that's a five fold increase in per capita GDP. In 1900 the global population stood at 1.6 billion. We closed out that century at just over 6 billion and now stand at 7.5 billion. Taking total per capita GDP in 1900 and total population in 1900 we have now grown humanity's ecological footprint by something in the order of 30 to 40 times. And we're still trapped in perpetual, exponential growth. It's still going on. We can't stop it. We won't stop it. No, it will stop us.

Contemplating our own demise is perhaps too great a challenge to our massive egos. Mound.

How did we evolve into beings with such big brains and end up so stupid?


Yes, Toby, worse as in not crazy, just murderously reckless. Sort of like starting your school bus route every morning with a quart of rye whiskey. That sort of worse.


Lorne, when you look at all those graphs, imagine they're all dials in the control room of a nuclear power plant. Each and every one of those dials is red-lined. That's the message they convey to me. Yet, despite all these warnings, we're dependent on constantly demanding more. Our civilization is built on more, exponentially more, forever. It's fairly easy to jump out of a car when it's crawling along at one or two miles an hour. We've got our car floored, 120 mph, and it's probably not survivable to jump out at that speed.


Anon, that's a question that is probably best left to the most intelligent lifeform that will succeed us. I just hope such a species emerges eventually. However, if like me, you think it may just be that all intelligent life is ultimately self-extinguishing then...

I remember in the late 80s arguing with an economics professor that exponential growth was not sustainable or logical.
I would get a blank stare from him every once and awhile and he would go back to spouting theory definitions.
I had to follow his line to pass the course.

Wonder if I should go back and tell him "told you so"....


The issue is that some are so mired in dogma that they can perceive common sense.


I understand your experience, Anon. I had to take economics, macro and micro, in my final year. There were no spots in the general arts econ courses so they squeezed me into the commerce faculty's econ courses. It turns out I excelled at both but that was entirely due to an ability to recite a gaggle of fairly simplistic teachings.

Economics, like other social sciences, is grounded in a belief-based construct. That's why you can have 10 top economists in the same room and each will have a different perspective. Ordinarily we would associate 10 people in the same room each espousing a different reality as proof you're in a lunatic asylum.

When Hayek and Friedman launched the neoliberal revolution on the West, which even Trudeau still embraces, it was ideological, not scientific. Hayek died before he saw the experiment run its course. Friedman did not and, before his death, conceded that neoliberalism was a failure. It's no coincidence that the World Bank and the IMF came to the same conclusion. Yet, despite all the manifest evidence, despite Friedman's admission, despite the warnings of the World Bank and the IMF, most of the G20 leaders, Canada's included, remain wedded to its failed orthodoxy.

Their insistence on perpetual exponential growth leaves them trapped in the neoliberal rut. They might switch to another economic model but only one that advanced continual growth. That model doesn't exist. The other models, steady state economics for example, are grounded in reality. Pursuing a new path would mean abandoning 18th century economics, 19th century industrialism and 20th century geopolitics, the models that served us fairly well for a couple of centuries before the economy hit and broke through the limits of the environment. Since that point, these modes of organization have been a death sentence.

In practice, humans are like every other specie; we expand our population to fit the available food supply. Mass starvation is nature's way of culling an over abundant specie including humans. Every time we do the humanitarian thing and rush food to a starving population we actually make the problem worse.

There is a big ethical problem in this. Do we save the desperate only to have them multiply up to the new source of food (our donations) or do we let them starve as nature dictates?

Belief in perpetual growth has been with us ever since, "Go forth and multiply." It expanded greatly with the Industrial Revolution and spiked with the discovery of oil. The computer age is making it soar. The problem is (as stated above in this and previous posts) that perpetual growth in a finite environment is a logical fallacy and impossible.

Having another go at your speeding car metaphor, I think of it a a bus speeding toward a cliff. There is a bucket of golden eggs on the floor. All the passengers know that the bus will go over the cliff. The last one off the bus gets to take the gold with him/her. What we have is a game of chicken in which every one wants the gold and wants everyone else to jump off first.

on the website "of two minds", Charles has an interesting observation that most of todays problems can be laid at the feet of easy credit and low interest rates. it makes sense that most of the excess production is a result of untamed borrowing against the future which results in premature consumption of resources and the accompanying pollution from making unnecessary goods.

Is it about dealing with growing debt? Debt makes a similar graph shape.

One thing the govt does is target inflation. Devaluing the currency to make the debt appear smaller as time goes by.

Another thing they do is focus on the debt-to-GDP ratio. So as debt grows, growing the GDP will maintain the ratio.

Since debt levels are growing, the GDP must grow as well to maintain the ratio. Don't look at total debt, look at the debt/GDP ratio.

Anyong......In Climate of Hope, Bloomberg and Pope offer an optimistic look at the challenge of climate change, the solutions they believe hold the greatest promise, and the practical steps that are necessary to achieve them. Writing from their experiences, and sharing their own stories from government, business, and advocacy, Bloomberg and Pope provide a road map for tackling the most complicated challenge the world has ever faced. Along the way, they turn the common line of thinking about climate change on its head: from top down to bottom up, from partisan to pragmatic, from costs to benefits, from tomorrow to today, and from fear to hope.

Bloomberg and Pope explore climate change solutions that will make the world healthier and more prosperous. They aim to begin a new type of conversation on the issue that will spur bolder action by cities, businesses, and citizens – and even, someday, by Washington. What do you think Mound?