Old Harry Catches the Stench of 1939 In the Air 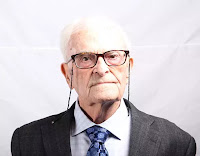 For a 94-year old guy, Harry Leslie Smith intends to see his voice heard. Smith splits his time between the U.K. and a home he maintains in Belleville, Ontario.  Ever outspoken, in July Smith gave an interview to The Tyee in which he compared Trudeau to his predecessor, Harper. In 2013 the WWII vet bemoaned the death of democracy he and so many of his friends had fought, and died, to preserve.

Now Harry is back with a warning. War is coming and "its thundering approach can't be ignored."

In the Middle East, Saudi Arabia eviscerates Yemen with the same ferocity as Mussolini did to Ethiopia when I was child in 1935. The hypocrisy of Britain’s government and elite class ensures that innocent blood still flows in Syria, Iraq and Afghanistan. Theresa May’s government insists that peace can only be achieved through the proliferation of weapons of war in conflict zones. Venezuela teeters towards anarchy and foreign intervention while in the Philippines, Rodrigo Duterte – protected by his alliance with Britain and the US – murders the vulnerable for the crime of trying to escape their poverty through drug addiction.

Britain also has nothing to be proud of. Since the Iraq war our country has been on a downward decline, as successive governments have eroded democracy and social justice, and savaged the welfare state with austerity, leading us into the cul de sac of Brexit. Like Trump, Brexit cannot be undone by liberal sanctimony – it can only be altered if the neoliberal economic model is smashed, as if it were a statue of a dictator, by a liberated people.

After years of Tory government, Britain is less equipped to change the course of history for the good than we were under Neville Chamberlain, when Nazism was appeased in the 1930s.

This August resembles too much that of 1939; the last summer of peace until 1945. Then aged 16 and still wet behind the ears, I’d go to pictures with my mates and we’d laugh at the newsreels of Hitler and other fascist monsters that lived beyond what we thought was our reach. Little did we know in that August 1939, life without peace, without carnage, without air raids, without the blitz, could be measured in days. I did not hear the thundering approach of war, but as an old man I hear it now for my grandchildren’s generation. I hope I am wrong. But I am petrified for them.

Harry's lament reminds me of a warning published by the leading German financial newspaper, Handelsblatt, in 2014 that we in the West are being "mentally mobilized for war." It's not clear yet what country or countries we'll be exchanging death counts with but given the spurt of new technology weaponry from stealth warplanes to directed energy weapons to modernized nuclear arsenals it appears we're prepping for something we haven't known since WWII, peer-on-peer warfare. That's when, instead of pounding the living hell out of (or into) little people with limited or no ability to pound back, we really get into it in a major league donnybrook.

Old Harry is right. The wheels are coming off our little red wagon. The environment is degrading much faster than we ever imagined. What's underway in the Arctic is really difficult to grasp and that's just one flash point. Illiberal democracy is on the rise. It's the same story with failed states. The world, as Harry senses, is becoming destabilized. And what are we doing to arrest this descent? Nothing really, nothing.
Posted by The Mound of Sound at 9:33 AM

Saw old Harry on an interview several months ago. Far more awake than 99% of the general population who are basically wandering through their lives with hands over ears and eyes. And better yet I happen to agree with what he says.

I agree with him too. I always read the Decarie Report. I'm old enough to remember saying goodbye to my big brothers when they went off to war and I watch everything very carefully.