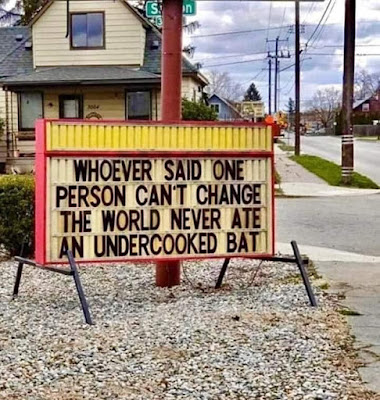 Researchers have found at least six new strains of coronavirus in bats. Some speculate there could be a thousand. SARS, remember that? Yeah, a coronavirus strain that is believed to have originated in bats.


The researchers discovered the viruses while surveying bats in Myanmar as part of a government-funded program called PREDICT to identify infectious diseases that have the potential to hop from animals to humans. And bats are prime suspects, as the mammals are thought to host thousands of yet-to-be-discovered coronaviruses. SARS-CoV-2, which causes the disease COVID-19, is also thought to have originated in bats before taking up residence in humans, possibly taking a detour through some intermediary host first.

Bats, "a reservoir of rapidly reproducing and highly transmissible viruses."


The Sars-CoV-2 virus almost certainly originated in bats, which have evolved fierce immune responses to viruses, researchers have discovered. These defences drive viruses to replicate faster so that they can get past bats’ immune defences. In turn, that transforms the bat into a reservoir of rapidly reproducing and highly transmissible viruses. Then when these bat viruses move into other mammals, creatures that lack a fast-response immune system, the viruses quickly spread into their new hosts. Most evidence suggests that Sars-CoV-2 started infecting humans via an intermediary species, such as pangolins.

“This virus probably jumped from a bat into another animal, and that other animal was probably near a human, maybe in a market,” says the virologist Prof Edward Holmes of Sydney University. “And so if that wildlife animal has a virus it’s picked up from a bat and we’re interacting with it, there’s a good chance that the virus will then spread to the person handling the animal. Then that person will go home and spread it to someone else and we have an outbreak.”

Bats for sale at a live animal market in Indonesia: 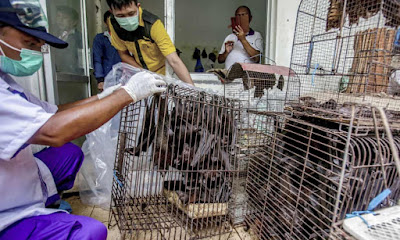 In 2007, America's National Institutes of Health released a report finding there are plenty of coronavirus strains in North America's bat populations.

And then there's fungus Histoplasma capsulatum. It's a lung infection that can be caused by walking in bat caves and releasing spores from bat guano. Some believe it's the etymological origin of "bat shit crazy."

Having a jolly munch on wild game or inhaling rhino horn powder seems a peculiarly Asian preoccupation to us. My pal Chu used to linger over the word fungus as he served up his delicious food, expecting me to recoil in horror like everyone else did. Too bad I knew mushrooms were fungi.

There are many stories of West Africans enjoying a tender barbecued monkey and other wild game. Part of the culture, which wagging a finger and delivering a lecture isn't going to stop. After all, our own lot of fearless hunters with hip flasks dons camo overlaid in bright orange to go and blow away partridges and pheasants and ducks, along with stringy Bambi and majestic moose, and occasionally bags one of our own. Toasted porcupine is said to taste like chicken. And I've had braised seal in Newfoundland forty-five years ago, not bad.

Canada Customs has itself an interesting time opening certain mail packages from overseas, we are led to believe. The contents may contain tradition that seems alien to us in the West. Instead, we have our own foibles like downing GMO goods laced with Roundup and tasty PDPA morsels but no saturated fats, burp. Plus the aforementioned wild game.

The Brits decided that mad cows weren't thaaat bad and could be incorporated into Smedleys steak and kidney pud, once the heads were removed. Then a few humans ended up with BSE marshmallow brain that simply shouldn't have happened, but did. Giving it the name of Variant Creutzfeldt-Jakob disease dissolved the opposition because, man, who wants that mouthful? It hurts just to read it on a page. The Ag boys kill off cows with foot-and-mouth disease and burn them. But do we know if the carcass itself is actually contaminated? Doesn't matter. No chances are taken there nor with BSE these days. We just have to make do with e-coli-laced Romaine lettuce, a spot of fungal botulism now and then, chicken processed so hygienically that salmonella runs rampant, and whatever that stuff was which contaminated Maple Leaf's sliced bologna and nitrite-laced compressed smoked meat hunks a few years ago.

To me, all of the above is part of the same human condition, it's just that it manifests differently depending on the culture. We all look at each other in our own groups, and say -- hey, look at those fools over there! It's all a matter of perspective. And racism.

But, thanks for the tip. I shall not venture into a bat cave because of all this shit.

Meanwhile, batshit crazies like the governor of Missouri or some redneck outpost or another who wants to sue China, and the equally dumbshite PM Morrison of Orstrilia (the man of empathy in the bushfires) who wants an International Enquiry into China's role on Covid-19 demonstrate to me that standing on a self-built pedestal and casting aspersions is a peculiarly Western game these days. It's all orchestrated by the US government who find China's rise a threat to their hegemony over the world banking system, but presented as the White Man's response to foreign debbils and their unclean ways. A load of tripe from beginning to end guaranteed to raise hackles, and thus prevent our finding out whether the cause is truly bats, or some other path we are currently unaware of. The fossilized Conservative brain, so aptly demonstrated by Scheer on a daily basis, loves to blame others while diverting attention away from their own shortomings, of which climate change denial is but one.

Too many people, too much raping of the Earth, too cheap airline flights, too many floating hotels chugging from port to port. The world needed a reset, and we've had one.


Africa definitely has a 'bush meat' problem. In Asia, patrons of these wet markets will eat many species we Westerners find repugnant, sometimes for their purported medicinal or sexual benefits. And,as you point out, we too have our fondness for wild meat although, today, we're domesticating popular species such as deer, bison and the ever-popular "wild boar."

I became a fan of wild boar, the real Schwarzwald creatures, while in Germany. Years later I found it offered on a New Years Eve menu. I pestered the waiter to find out where it was sourced. It came from a farm in Surrey.

Most of our fisheries prey on wild species, sometimes to the point of collapse.

As populations increase and the productivity of farmland continues to degrade, all compounded by the impacts of climate change, food insecurity is bound to worsen and that will ramp up the pressure on wildlife. Those younger than us, BM, will watch as that plays out.

Even today when we talk about the "Big One" hitting the island, the conversation often gets around to making do by fishing and a bit of hunting. I'm certainly well equipped for both although it would have to be dire necessity before I would hunt a deer or rabbit.