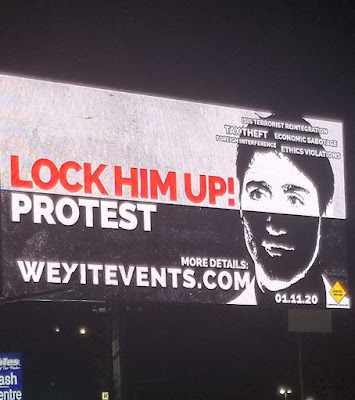 Well that didn't last long, did it? Seems the 'Bertans have lost their wild-eyed enthusiasm for liberating their province from the oppressive Canadian state. Now those damned eastern bloodsuckers don't seem so bad at all.


COVID-19 is serving as a powerful reminder of how much we depend on each other and how much we’ll need to keep doing that as we emerge from its shadow. For most of us, this growing sense of social and national solidarity is a good thing.

But for Alberta’s separatist movement, it’s a major setback. That’s because, just as there are no atheists in foxholes, there won’t be many people who believe they’re better off on their own after this pandemic finally passes. As Albertans stare at the possibility of an economic downturn that’s reminiscent of the Great Depression, some of them are realizing that they could use a little help from their friends – even the ones they don’t particularly like.

This is a nightmare for those who have been dreaming about an independent Alberta, one that’s equal parts political revenge fantasy and Ayn Rand fan-fiction. Only once unshackled from the burdens of supporting the rest of the country and the ungrateful people in it who were holding them down, it suggests, will their province truly flourish.

The separatist dream of an independent Alberta also conveniently overlooks the fact that separating from Canada wouldn’t mean separating from geography. British Columbia would still stand between them and the Pacific Ocean, and the vast majority of its residents would want no part of a right-wing Libertarian petrostate, to say nothing of the many untreatied Indigenous communities who have made their feelings about Alberta’s favourite industry clear.

Hmm, I wonder what Ezra's doing right about now?
Posted by The Mound of Sound at 8:26 AM

Strange, isn't it, Mound, how things have changed in just a few short weeks?

The current crisis concentrates the mind wonderfully, doesn't it, Mound?

.. What was cyclic 'boom or bust' re the plundering of Alberta
is now a classic beat down administered by Jason Kenney et al.
A furious spending splurge, apparently shopping with Pensioner $$
is now pitched down the rabbit hole of Big Business and Big Energy
all the while, the Kenney Choir rubber stamping secrecy
'self regulating' themselves as they allowed all Resource Extractors to do

All that remains is the forensic accounting...
Where are the Albertan Pensioners's Funds, Jason ?
Who got the money ? Why, Names, Amounts, all Communications, thanks


It does expose the inherent weakness of their conspiracy theories. They get whipped up by the usual suspects in government and the media to see themselves as victims, unduly set upon. It's always an outsider doing them in. Then something comes along, in this case a virus, and they fold like a cheap suit.

It was telling, Sal, that Jason chose a gathering of CAPP, the Canadian Association of Petroleum Producers, to deliver his speech. A nice way of reminding ordinary Albertans who still holds the whip hand.