What We're Up Against - In One Picture 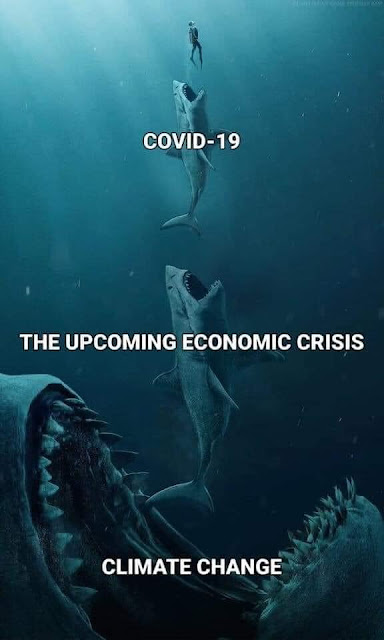 It's supposed to be a busier than usual hurricane season this year, plus wildfires, and flooding. There are a lot of grim choices to be made between worse and worser.

Two things that I've pondered:
A) what would have happened in Australia had Covid-19 hit a couple months earlier? We might find out later this year.

B) What would've happened had this happened during Harper's reign or Scheer's?

Oh dear; how things come together!

in the spirit of mother nature bats last
she is also defiantly up to bat now
and remember
when all those kids just head to the beach
no job , no money , no people , no future, just debt
it is hard to threaten a man with death
when they have nothing to live for

That's a good question, Stu. All you need do is think back to the last major flood in Calgary. Harper even put on a RCAF flight jacket complete with pilot wings. And then the bullshit flew.

"No one could have seen it coming" was the catch line. No one except the science types who warned this sort of thing was coming. No one except anyone who remembered Calgary already had one of these "once in a century" floods five years earlier.

When shit happens Conservatives run for cover. When the 2008/2009 Great Recession hit, Harper immediately moved to reverse his 40-year/zero down mortgage initiative. He put the brakes on a series of bank liberalization proposals that would have allowed our chartered banks to get into the Casino Capitalism games that wrecked major banks across the US and into Europe. Paul Martin resisted the banks' demands. Not Harper.

So what did Harper say to cover his tracks? "No one saw this coming." No one.

Nobel laureate economist Paul Krugman saw it coming. He wrote "The Great Unraveling" five years before the Great Recession hit. Anyone who read that book saw it coming.

Nobel laureate economist, Joe Stiglitz, saw it coming. He wrote about it. He gave lectures on it years before it hit.

Economist Nouriel Roubini saw it coming and is credited with being the first to recognize it.

Nobody who chose to ignore Krugman and Stiglitz and Roubini and all those others saw it coming because they chose not to see it coming.

Just as Conservatives promised to transform Calgary after the first flood and then lost interest, leaving the city exposed to the even worse "once a century" flood five years later and then said "no one saw it coming" Harper did the very same thing with the Great Recession.

That's been Trump's approach since he took office. When you've f**ked up big time, shirk responsibility.

I think that answers your question, Stu.

Thanks for the link, TB. Until recently there were worries that an early Spring thaw might hit central Canada causing evacuations. The concern was that people who had to get out could not be given emergency shelter in community centres, etc., because of the risk of exposure to the Covid-19 virus.

I've long suspected that the 2020s will be a transformative decade for mankind and most other life forms, terrestrial and aquatic.

Events are occurring today that, ten years ago, were predicted might occur by the end of this century.

I'd say, "No one saw Harper coming," but anyone who'd taken a good look would have. Everything that we see now in these smug libertarian bastards was there for a glorious viewing in 1977. It's time that we chased their successors and what remains of them out of politics and learned to recognize signs of the social disorder when it first takes hold of them.

.. I will seek the facts myself.. re my question - below.. but..
I do note the fierce MainMedia clamour for release of the 'Federal Projections'..

My question is for Alberta.. and the current Federal Government..

What 'projections' are there re Oil Price & its related Gas Price and of course re price for Diluted Bitumen. We all need to stress that 96% of Canada's 'Vast Oil Reserves' are actually Bitumen, not oil. Gas is a seperate resource.

So.. Alberta has spent x Billions.. including Albertan's Pension Funds monies very recently, as pipeline investment in both resources. There must have been a basic perceived 'value' to those pension funds prior to Energy prices cratering.. What is their current value ? What is their projected value in approx 3 months? Or next year ? That money is gone.. its been spent on an investment.. OK

In my humble view, the Kenney Government is ripe to be forced to resign immediately by Ms Notely and concerned or freaked Albertans. Is Jason Kenney planning any more surprise investment .. in the same sector ? Or is he all about surprise and lack of any transparency or due diligence ?

It's going to be impossible to bring down the UCP except from inside, Sal. Kenney has already shown the lengths he'll go to for power. To imagine him stepping down voluntarily doesn't seem likely. Perhaps if Alberta's economy truly crashed, sending voters into the streets with pitchforks and torches...