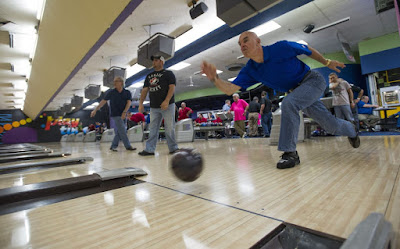 So many headlines scream that 'this changes everything' or 'we can't go back' or 'normal is over.'  Sure, four decades of neoliberalism have left us in a real mess. This pandemic, enormous as it appears, a viral Sword of Damocles hanging over everyone's head, isn't the only and certainly not the most dangerous threat we're facing. Think of it as Peril 101, Introduction to a Challenging Century.

Covid-19 will teach us many things. We will explore the pitfalls of the global economy. We will test the limits of our government and how, when we need it to boldly lead it instead lags and follows timidly. In the third part of the class we get to the really good stuff - you. Well, you and me, us.

We talk a good game. Everything must change. We can't go on like this. Look where all of this has gotten us! We deserve better.

Yeah, sure.  If you share those sentiments, ask how such fundamental change is going to happen? Who are the agents of change? What would this widely heralded change look like?

What if we emerge from the pandemic with little appetite for the uncertainty and dislocation that change carries? What if we just want to go back?


The definition of “normal” might be hard to pin down, but its function is pretty clear: normal is safe. It’s familiar. In the aftermath of the devastation of World War One, Warren Harding’s presidential campaign promise was simple: “America's present need is not heroics, but healing; not nostrums, but normalcy.” Harding knew Americans wanted to get back to life as they knew it before war disrupted the flows and rhythms of their daily lives. He understood that in the face of fear, people long to go back to a time before the fear set in. His rhetoric connected with the public, which voted him into the White House on 2 November 1920.

What if, by the time this pandemic passes and government sounds the 'all clear' what we're doing now has become our new normal? What if there is no normal?

The biggest engine of change is us, humanity. In the postwar era we have gone from under 2.5 billion to now closing in on 8 billion and, in the minds of some, heading to 10 billion, perhaps more. Humanity's footprint has come at a cost that has been borne, wherever possible, by other species. Since the Reagan-Thatcher era the overall populations of both terrestrial and marine creatures have plummeted by half and more.  As our numbers metastasized, we deprived other species of the habitat and resources needed to support their former populations.  As Joni Mitchell sang in 1970, "they paved Paradise to put up a parking lot." We have transformed life on Earth for all living creatures and, along the way, our sense of normal became exceedingly flexible.

We don't process normalcy very well. It's not human nature. It took humanity thousands of years to first reach a billion in population. For centuries you could expect to live and die as your grandparents did and as their grandparents did. You could expect to earn what they got paid. Life was short, often brutal, but it was predictable. You didn't have to worry much about change. Resource exhaustion, global warming, ocean acidification, deforestation, desertification, the collapse of global fisheries - those have been added to the human agenda only recently.

How did we not notice the end of normalcy as a guiding force?  UCLA prof, Jared Diamond,


"Perhaps the commonest circumstance under which societies fail to perceive a problem is when it takes the form of a slow trend concealed by wide up-and-down fluctuations. The prime example in modern times is global warming. ...as we all know, climate fluctuates up and down erratically from year to year. ...With such large and unpredictable fluctuations, it has taken a long time to discern the average upwards trend of 0.01 degree per year within that noisy signal.

Creeping normalcy, landscape amnesia - that's human nature honed over thousands of years. If you had been in a coma for decades and came to with a grasp of normalcy pegged to, say, 1970, you might want to go back into that coma. The world of 2020 would appear a mysterious, scary and dangerous place indeed. We have no sense of that mainly because the world of 1970 holds no reality for us. We carry no awareness of the gains and losses, no metrics by which to gauge our condition.

Yes, we desperately need another Enlightenment, a reformation, a renaissance but it's not in the cards. No one is going to offer it and few, if any, will demand it. Even if it's just getting back to the Thursday night bowling league, we'll settle.
Posted by The Mound of Sound at 12:21 PM

one could say mother nature and the bats have had enough of us humans and our definition of normal. they're out to even things out. In my life time the world population of humans had doubled. that is not normal. of course, in first yr university, the normal was defined as a statistical myth.

the new normal, might need to involve a lowering of the world population the more humans on this earth the more of these pandemics, in my opinion. We need more bears, birds, insects, like bees, etc. one could say humans have worn out their welcome on this earth. WE have used too much water in some places, manufactured too much junk in other places.

these days people have walk in closets. go back and have a look at closets in homes of the 1950s and 60s. in our quest for more clothes, we have destroyed whole eco systems. Most of that stuff comes from over seas where the eco systems have been destroyed. If you purchase only cloths made in your own country, you save a lot of money. there isnt' that much around and what there is, is mostly local. try it. You'll find the locally made furnntiure or in country lasts longer. its saves money and folks do we really need 5 t.v.s adn a new larger one each yr. if we continue down that road, it won[t end well. we need to pay attention to the environent. Or some great stone may come hurling out of space adn put an end to all of this. where will that leave those of you with your 20K sq. ft house, 50 pairs of shoes, and your billions or millions.

No argument here, e.a.f. The problem with this creeping normalcy is that it displaces our connection with the past.

The first president I saw on TV was Eisenhower. Black and white, this tiny screen in a big wooden cabinet. Bizarre. Kennedy, Johnson, Nixon, Ford, Carter, Reagan, Bush Sr., Clinton, Bush Jr., Obama and now the lunatic. A lot of change over those decades, most of it now at best a faded memory.

these days people have walk in closets. go back and have a look at closets in homes of the 1950s

very true.
My pet peeve is 'outside heating'
That is, propane fired get out of jail card , for being to lazy to wear a sweater.

Not only has the world population exploded but so has it's expectations.
Making a happy, healthy modest living is no longer acceptable!
We must strive for more!

As manufacturing and farming become more efficient we convince ourselves that it can be business as usual.
With global efficiencies as they are we need fewer people not more ,or a more equitable method of resource equilibrium.
What we do not factor in is that we are doing that by fiscal economics , we download this prosperity to our grand children.
We also do not factor in the degradation of the environment, particularly water.

Perhaps this is a human frailty issue and not a political one?