When Power Speaks Truth to the Public, We All Win. 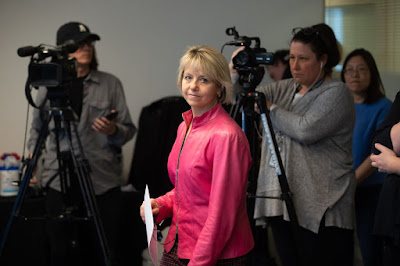 The Globe has high praise for British Columbia's handling of the Covid-19 pandemic.

Last Friday, British Columbia Provincial Health Officer Bonnie Henry and Health Minister Adrian Dix gave a master class in treating the public like adults. It was a model for any government dealing with a crisis.

First, Dr. Henry walked viewers through the statistical models the province is using, and the reasons why the evidence leads her to believe the province may be on the point of getting the upper hand on COVID-19. Her explanations were clear and careful. There was no obfuscation or bluster.

After Dr. Henry had presented and analyzed the data on the spread of the virus and the public health measures taken, Mr. Dix itemized the province’s key resources – from ventilators to hospital beds – and measured their availability against three scenarios: a modest outbreak (South Korea), medium (China’s Hubei province) and bad (northern Italy).

It inspired confidence. Transparency does that.

A free and transparent flow of data will help win public support and trust. A lot is being asked of Canadians and without public buy-in, Canada will not succeed in bending the curve.

B.C. is an example of doing it right. Others need improvement. In Ontario, journalists are still digging up data that the provincial government should be releasing, and discovering information gaps that may prove costly.

Dr. Henry does indeed lay her cards on the table. You don't hear public officials mentioning that Covid-19 will probably return, with a vengeance, in the fall, after lulling us into a false sense of security by receding in the hottest months of summer. You don't hear it from Donald Trump. You don't even hear it from our prime minister. Some of them, especially Trump, even portray it as a "one and done" epidemic.

A quick search of pandemics at the Centers for Disease Control or its counterparts in the UK and Canada, reveals that pandemics come in two, sometimes three waves, over a span of 12 to 18-months. The second wave is typically the most deadly. Getting the public to accept that and prepare for it is a Herculean chore and it will take time. What will our contagion look like this fall? How will our economy cope? What are the chances there will be effective anti-virals in sufficient quantities by the end of summer to blunt the impact of a second wave? How long before there's a vaccine?
Posted by The Mound of Sound at 6:26 PM

I have feeling that it was John Horgan that persuaded Justin Trudeau to close the Canada US border.
A day or so after Trudeau said the border would remain open Horgan voiced his disapproval, a day or so later the border was closed; coincidence!
So far! BC residents would seem to be acting in reasonable but not paranoid manner; speaks well to us wet coasters.
Living in the best place in the world has its responsibilities.

The scenario dilemma has been used to denigrate Hansen for years. He published three curves forecasting future temperature for three different scenarios. Do nothing, do something, do a lot. Climate deniers still vilify him for being wrong using only his A curve. His B curve was pretty good but the bad guys never mention it.

We may be too unsophisticated to deal with virus predictions using more than one set of assumptions.

TB, as one of the 'high risk' groups (thanks to my recently discovered Viking lineage) I've been adhering to a quarantine regime, venturing out only to hit a grocery store once a week. When I am out, however, I'm struck by how cheerfully my townsfolk accept this predicament and the need for social-distancing, etc. There's a clear "we're all in this together" atmosphere as we queue up, a good 6+ feet apart and wait our turn. How this will translate into Covid-19 casualties is something we accept from our leaders' assurances.

Thinking back to our parents' experiences in the Great Depression and the subsequent world war, our sacrifices are pretty insignificant.

Rumley, there's a report in today's National Observer about how the pandemic has energized the conspiracy theorists of the far right. Everyone is entitled to their own opinion until they set out to become influencers spreading dangerous lies. In times of emergency history shows the merits of reining in unfettered freedom of expression.

Sunlight is still a powerful disinfectant. And it also inspires confidence.

If anyone is interested, PBS has a documentary on "Influenza 1918" which most of us call the Spanish Flu. https://www.pbs.org/wgbh/americanexperience/films/influenza/#part01

Much of what is shown looks familiar to what we are seeing with Covid-19. The big difference is that back then viruses had not yet been discovered. Today we do.

Toby, I saw a photograph of New York during the peak of the 1918-1919 Spanish Flu. Looking at the density of the crowd it was easy to imagine how the contagion spread. You can see similar images of other major cities. There was no awareness of how a virus spread or the need for counter-measures such as distancing. Conditions were ripe for the Reaper.

During the Black Death the plague was blamed on the miasma, bad air. It wasn't until the mid-19th century that the miasma theory was superseded by germ theory.

From my heritage.
A remnant from the past.
https://www.billspics.co.uk/ackworth-plague-stone

Not unique but interesting.

A quick search of pandemics at the Centers for Disease Control or its counterparts in the UK and Canada, reveals that pandemics come in two, sometimes three waves, over a span of 12 to 18-months.

I hope we have the advantage of understanding history and science.
In 1918 the world had no idea of what was happening around them.
There are those around us that still do not accept the scientific method.
Many of those are within the USA whose influence is substantial.
Between those that do not wish to understand the scientific method, the religious extremists and those that choose the Wall Street model! we have an uphill battle.

Read the comments they are more revealing than the article.

America has its head up its arse and should be considered a liability to humankind.

Its going to be an uphill battle.

I have heard that the numbers of people that get it is under reported because they only test the sickest people. If you have mild symptoms they just tell you to stay home unless you have trouble breathing or very high fever. So more people may have it and not know but that also means it's not as deadly. Also in Europe apparently 95% of the dead were over 60. We may be alright but i'm afraid America is not so lucky. A country with so many people with underlying health conditions and no universal coverage to get their ills fixed and this virus will be a horrible combination. I hope this particular elephant doesn't crush us in it's death throes.

For the present it may have improved our manners. Let's see if it can last. We may end up being better citizens if we can keep the libertarians off the stage and watch what they're doing in rehearsals.

@ John B.
The Libetarians are at drama classes as we speak.