Preparedness Is a Choice. To Remain Unprepared Is Also a Choice. 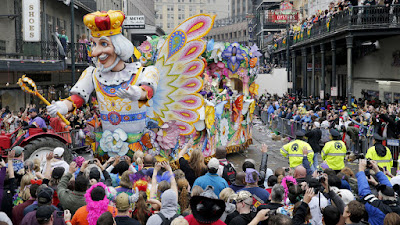 Many Americans must die over the next year thanks for their president's refusal to fight the Covid-19 virus for the critical two months, mid-January to mid-March, that allowed the virus to become established in America and spread, especially across the South.

Trump's "Don't Worry. Be Happy" attitude set the tone for many Red State governors, guys who thought it okay to allow teens to mass for Spring Break on Florida's beaches or revelers to gather for Mardi Gras in New Orleans. Slate.com reports that the partiers who filled the streets of New Orleans didn't realize they were in danger.

The first COVID-19 case in Louisiana was reported on March 9. By March 26 there were 2,305, resulting in 83 deaths. New Orleans now has one of the highest per capita infection rates and COVID-19 death rates in the country. New cases are growing exponentially. As the city faces shortages of ventilators and personal protective equipment in hospitals, Mayor LaToya Cantrell went on CNN last Thursday to rally support for the city. Oddly, Wolf Blitzer spent most of the segment asking her about Mardi Gras—if anyone had advised her to cancel it or if, in hindsight, she wished she had. Cantrell pointed out that federal authorities consulting with the city ahead of its public events hadn’t raised any red flags.

If we're lucky we'll get through the Covid-19 pandemic before another calamity hits and the science types have warned us that there are several catastrophes that await, locked and loaded. They've warned us that the day will come when we're confronted not just by one of these disasters but two, perhaps three, at the same time. What then?

What we need to understand is that we can no longer wait for the disaster to happen and then respond to it. We have to prepare for catastrophes well in advance. Preparedness is a choice but we have to recognize to remain unprepared, vulnerable is also a choice.

Jeremy Konyndyk was part of the pandemic team set up during the Obama administration. He was instrumental in writing the pandemic playbook. Trump dismantled that team. Trump ignored the emergency playbook.

Canada needs to learn from this murderous object lesson in the States. Yes, the Trudeau government was better prepared than the Trump White House. We weren't dismissive of the peril although our reaction often seemed to mirror Trump's. While we were quicker to recognize it we were still unprepared. Medical supplies, emergency equipment, essential gear that ought to have been warehoused in strategic places around the country, wasn't. We didn't have the intensive care/pandemic infrastructure ready to go. That would have cost money and I suppose we needed that money for other things such as billions in annual subsidies and benefits to the fossil energy industry.

No more. This is our lesson. This is our wake-up call. Never again can we allow ourselves to be caught as unprepared as we are now. I think we're going to get off easy this time, even if it doesn't feel like it. We can't risk that again.
Posted by The Mound of Sound at 7:46 PM

I didn't see any reference to these issues in my quarterly report. Can we get somebody else to pay for it?

Ontario apparently had ~55 million n95 masks stockpiled after SARS, but allowed them to expire. It reminds me of your posts about our crumbling infrastructure: it's boring, unnoticed until it's needed or broken and doesn't usually get votes.

"Canada needs to learn from this murderous object lesson "

Perhaps China should become the prioritized customer of a certain Nanaimo pulp mill....

Or, quietly freeing Meng (a prerogative of the Justice Minister)
could be the 'right' thing to do about now.

As with climate change, the alarm bells are ringing everywhere, Mound.

"New research suggests industrial livestock, not wet markets, might be origin of Covid-19"

Hmmmm, this is a case for .... epidemiologists

Thanks for the link, NPoV, even if the contention is, at this point, a bit moot.

Please please , cn Trump and Hannity be next?

A Tiger has also contracted the virus!

Don't let your Guppies out of their tank folks!

I live in earshot of said pulp mill.
If I strain my ears to listen to the lunchtime converstaions all I hear is..
Harmac Pulp, Harmac Pulp,Harmac pulp!!
This is followed by .
We are #1, We are #1.
Where the heck I have I heard this before?

How times change; outside of the stockmartket that is!