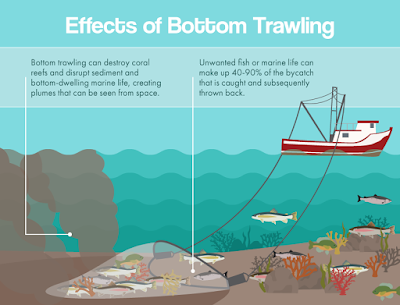 For decades, humans have been inflicting one blow after another on our oceans. Global heating, ocean acidification, the discharge of chemicals, especially fertilizers, the dumping of massive plastics waste, rapacious overfishing and the use of trawls that rake and destroy seabed habitats where the oceanic food chain begins, seabed drilling accidents. It's been a prescription for the death of our oceans on which all life, marine and terrestrial, depends.

Apparently we can reverse all that.


The glory of the world’s oceans could be restored within a generation, according to a major new scientific review. ...The scientists say there is now the knowledge to create an ocean renaissance for wildlife by 2050 and with it bolster the services that the world’s people rely on, from food to coastal protection to climate stability. The measures needed, including protecting large swathes of ocean, sustainable fishing and pollution controls, would cost billions of dollars a year, the scientists say, but would bring benefits 10 times as high.

The law of the sea creates three classes of oceans - ours, yours, and anybody's/nobody's, the vast swathes that we pillage and contaminate.


...progress is far from straightforward. Pollution from farms and plastics still pours into the oceans, the waters are reaching record high temperatures, and destructive fishing is still taking place in many places, with at least one-third of fish stocks overexploited.

“The Mediterranean is still pretty much a basket case,” said Roberts. “And there is horrendous overfishing throughout large parts of south-east Asia and India, where fisheries are just catching anything they trawl on the seabed to render into fish meal and oil.”

The global heating of the oceans has driven the few hundred surviving northern right whales along the coast of the western Atlantic. Here, amid busy shipping lanes and lobster fisheries, they are killed by collisions or drowned in a tangle of ropes, according to Roberts, though new regulations are starting to help.

The Gulf of Mexico suffers massive dead zones owing to huge amounts of manure and fertiliser running off midwest farms, and elsewhere albatrosses continue to be snared by long-line fishers, despite simple solutions being available.

The challenge will be to forge a powerful international consensus to do what is required for a protracted period, 30 years, and that puts the public interest, humanity's interest, over the narrow special interests of industrial fishing fleets, seabed miners and such. That's a tall order.

The challenge will be to forge a powerful international consensus to do what is required.

With our current political leaders band of brothers the world is becoming more introvert.
However I will say that, so far, Canada has ( with the exception of dear Jason) rallied to the post over Covid19.

Back to fish.
Canada has had reciprocal agreements with foreign governments over fishing rights , in Canadian waters, in exchange for those foreign fish fleets to make use of Canadian dry dock and repair facilities .
I don't know that this matters much anymore as our graving docks are quite busy.
The policing of our fish producing waters is done by private companies contracted to DFO.
I know an ex fish cop! who was their observer for many years on the Pacific side.
I am advised that illegal fishing is quite prevalent in Canadian waters.
Add to this that the local fish processors voice loud statements that the herring fishery is sustainable!
They have to as the Salmon fishery is about dead, they know it and why.
The somewhat recent landslide on the Fraser river is going to have long term implications for BC's salmon fisheries.

One only has to take the wonderful Francis Berkley voyage down the Alberni inlet to see what fisheries we once had.
http://carlykb.com/gateway/?p=13255

Pissed/ fished it away , did we not?

WE have to do it, TB. What awaits humanity if we don't?

This is from an island.. a tich smaller than Canada eh ..
Yet wise enough to declare the entire archipelago a Marine Preserve ..
Out of season, its illegal to have live or frozen lobster in stores
Touch not, the coral.. yes, there is a healthy grouper fishery
you must dive and spear them.. drag the reef ?
You must be kidding ..

The Boss with a friend.. 8 feet offshore
the rest of the herd nibbling my toes..

This is 45' feet from where we met the scorpion fish, Mound
& here its mebbe 6-8' deep or less .. walk in snorkelling
she's about 10 feet from shore
30 secs walk from Ricky's Flamingo Palace
and crackling cold Corona.. & steamed Grouper
or fresh conch salad.. silly amazing ..
and adjoining an old school laid back Club Med

I can show you this exact spot via satellite shot from earth orbit
or looking down as we depart for home..
We call it Pelican Point.. local 'Belongers' know it as 'Stubb's Point'