What Happens If We Get This Wrong? 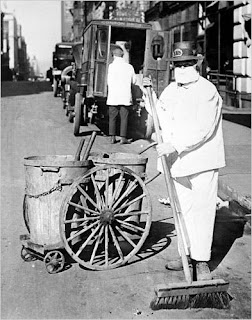 Medical science contends that viral pandemics come in waves. The 1918 Spanish Flu claimed 30,000 lives in New York City. 20,000 of those deaths occurred in the second wave, in the fall of 1918.

The first wave, in the spring of that year, saw New York health officials implement measures very similar to what we're doing today - social distancing, quarantines, face masks - they even outlawed spitting which, apparently, was a common practice of the day. No spitting. Sounds like a pretty good idea.

New Yorkers went along with these measures but they didn't like it. And so, when the first wave abated, many took it as a "one and done" problem and went back to the old familiar ways. It was still wartime, after all, and civic leaders worried about sapping public morale.

On Armistice Day, November 11, people were not reluctant to swarm the streets, nary a mask to be seen. 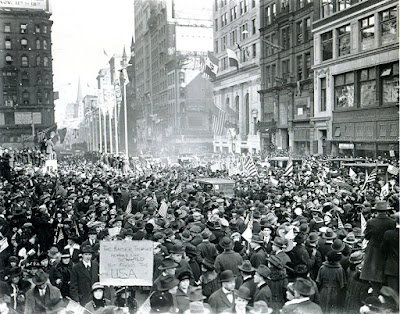 The medical community warns that a second Covid-19 wave is more than just possible. It's anticipated that we'll be dealing with Covid-19 and the seasonal flu at the same time. Nobody seems quite sure which will be worse. That makes planning awfully difficult. And, uncertainty plays into the hands of those who want restrictions eased or canceled.

Governments are wrestling with competing interests, particularly the economy versus health safety. There's no good answer, no magic bullet. A balance has to be struck somewhere. Unfortunately, governments don't handle these emergencies very well. This brings to mind a report out of the EU in 2013 that concluded that governments often intervene too late costing lives and economic loss.


The peer-reviewed study, which is aimed to improve understanding of scientific information, looks at 18 areas including radiation from mobile phones, birth control pills in the aquatic environment, and invasive species. It found that governments often introduced laws much too late to prevent deaths and massive financial costs, but were highly likely to ignore scientific warnings and resist any regulation. The authors found more than 80 cases where no regulation was introduced when it later turned out that the risk from a technology or chemical was real, or still unproven.

A failure to act in an optimally timely fashion is a common complaint about how all save a few governments responded to Covid-19. Our federal government was spared scathing criticism by the rolling horror story we watch unfolding next door in Trumpland.  That's not to say Ottawa can rest on any laurels. We need to up our game - now. Even existential threats tend to go unnoticed.


But if something hasn’t yet happened, there is a deep-seated temptation to act as if it’s not going to happen. If that is true of an event, like this pandemic, that will kill only a tiny fraction of the world’s population, it’s even more the case for what are known as existential threats. There are two definitions of existential threat, though they often amount to the same thing. One is something that will bring a total end to humanity, remove us as a species from this planet or any other. The other, only slightly less troubling, is something that leads to an irrevocable collapse of civilisation, reducing surviving humanity to a prehistoric state of existence.

An Australian based at Oxford’s Future of Humanity Institute, [Toby] Ord is one of a tiny number of academics working in the field of existential risk assessment. It’s a discipline that takes in everything from stellar explosions right down to rogue microbes, from supervolcanoes to artificial superintelligence.

Ord works through each potential threat and examines the likelihood of it occurring in the next century. For example, the probability of a supernova causing a catastrophe on Earth he estimates to be less than one in 50m. Even adding all the naturally occurring risks together (which includes naturally occurring viruses), Ord contends that they do not amount to the existential risk presented individually by nuclear war or global heating.
Most of the time, the general public, governments and other academics are largely content to neglect most of these risks. Few of us, after all, enjoy contemplating the apocalypse.

One of those who does run the math on apocalypse is Martin Rees, Britain's Astronomer Royal, and former head of the Royal Society. You might say he wrote the book on it - "Our Final Hour, A Scientist's Warning: How Terror, Error, and Environmental Disaster Threaten Humankind's Future in This Century - on Earth and Beyond."  In the book, Baron Rees details a plethora of threats, most of them man-made, that will determine whether humanity survives the 21st century. When they're taken together, he gives us a 50/50 chance:


“I’m worried,” he says, “simply because our world is so interconnected, that the magnitude of the worst potential catastrophes has grown unprecedentedly large, and too many have been in denial about them. We ignore the wise maxim ‘the unfamiliar is not the same as the improbable’.”

The good news is that it's considered unlikely that humanity could be felled by a pandemic.


Pandemics and natural disasters might cause colossal and catastrophic loss of life, but Dr Nick Bostrom, director of Oxford's Future of Humanity Institute, believes humanity would be likely to survive.

This is because as a species we've already outlasted many thousands of years of disease, famine, flood, predators, persecution, earthquakes and environmental change. So the odds remain in our favour.

And in the time frame of a century, he says the risk of extinction from asteroid impacts and super-volcanic eruptions remains "extremely small".

Even the unprecedented self-inflicted losses in the 20th Century in two world wars, and the Spanish flu epidemic, failed to halt the upward rise in the global human population.

If that's the feelgood reassurance out of the way, what should we really be worrying about?

Dr Bostrom believes we've entered a new kind of technological era with the capacity to threaten our future as never before. These are "threats we have no track record of surviving".

Likening it to a dangerous weapon in the hands of a child, he says the advance of technology has overtaken our capacity to control the possible consequences.

Experiments in areas such as synthetic biology, nanotechnology and machine intelligence are hurtling forward into the territory of the unintended and unpredictable.

Nanotechnology, working at a molecular or atomic level, could also become highly destructive if used for warfare, he argues. He has written that future governments will have a major challenge to control and restrict misuses.

Lord Rees has been instrumental in the establishment of the Centre for the Study of Existential Risks at Cambridge. Both institutes seem to agree that humanity faces grave, truly existential dangers whether technological, biological or environmental and they agree that the key to managing these risks is global cooperation on levels we have never experienced. It's a situation where one or two holdouts can undermine the best efforts of all others.

Unfortunately the level of global collaboration these experts envision depends on an even greater level of global trust. There's precious little sign of that on the horizon. We seem to have arrived at a time of deep suspicion bordering on paranoia whether it's who is up to what with 5G or whether a virus was weaponized. Whatever it is, somebody will find a way to game it.

Sadly in days of distress, war, pandemic, and particularly the loss of income; all bets are off.
Whilst we live in an age of over consumption that borders on lunacy, our base instinct is to provide for ourselves and our offspring.
We do this without consideration to anyone outside our sphere of community.

s who is up to what with 5G or whether a virus was weaponized. Whatever it is, somebody will find a way to game it.

That some people find conspiracy in their lives has gone on forever.
People love conspiracies , it resolves them of critical thinking.
In this very complicated age the likes of which we have never seen before this is understandable , whilst being frustrating.

What we, desperately, need is another age of enlightenment.


At the end of the day we need solutions not division.


Yes, we need something on the scale of another Enlightenment, TB. I'm having trouble imagining how that might come about, where we would find the calibre of leadership it would require.

One of the great problems I foresee is that humanity won't experience these challenges in any common sense. They'll vary region by region, from one continent to another, and by bands of latitude. Some regions will get hit hard first while others may experience a lesser threat years, even decades later. This absence of uniformity can even spawn suspicion and hostility from one culture to the next.

It's hard to see how we can overcome these hurdles.

It would seem that national character is a crucial aspect of how countries handle emergencies and threats, Mound. Germany, for example, has a disciplined culture which makes obeying government restrictions during the current crisis more palatable and enforceable. As well, much money is spent on basic science, and from what I read, data in that country has been superb, thereby facilitating the decision-making process.

The antithesis of Germany, of course, is the United States, and we see where that has landed those people, eh?

Yes, Lorne, we are not 'birds of a feather.' Even as this pandemic settles in, America's far right, including the surviving Koch brother, are using the chaos to try to create gains for capital over labour. When a nation tolerates disaster profiteering, it won't be embracing disruptive global efforts needed to assure the future of humanity.