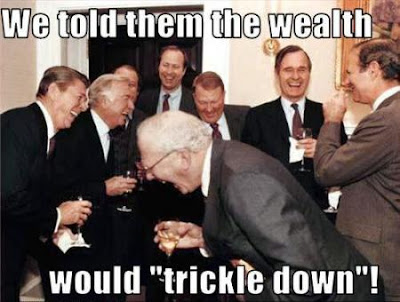 Could the Covid-19 virus finally weaken neoliberalism's grip on our governments? Cornell law prof, Joseph Margulies, thinks it just might.

We have faced crises before, and this too shall pass. For all the pain it has caused and will cause, it is just a virus, not an existential threat to the nation. Yet in critical respects, this crisis is unlike any we have experienced for more than a century. It commands a response and imposes burdens that are very different from those seen by anyone alive today. Before it is over, the virus will touch every aspect of national life. And though we are early in the curve, we can already distill what may be the most important lesson of the crisis into a single sentence: COVID-19 exposes the cruel folly of neoliberal governance.

As I have written here before, neoliberalism is the idea that social problems are better solved by the private sector than by government. But more than an economic or political model, neoliberalism is an ideology, a way to make sense of the world.

We haven’t had this many people look plaintively to the federal government for a lifeline since the New Deal, and everyone is very relieved neoliberals never managed to drown government in the bathtub.

The first and most obvious lesson of COVID-19, therefore, is that despite what neoliberals insist, people immediately and instinctively look to the national government for rescue when their economic or physical health is imperiled. Even more importantly, because the response is universal, we should resist the neoliberal determination to stigmatize it. Now more than ever, we see that government is not the enemy.

Yet, if the virus has made government cool again, it has not imposed its burdens uniformly, and that too is a product of neoliberal governance. Decades of neoliberal policy have shredded social welfare programs, dramatically weakened support for workers, and produced record levels of inequality. The top 1% of households in the United States own 40% of all wealth in the country, more than the bottom 90% combined, a higher level of inequality than at any time since at least 1962. And things are getting worse. Thanks in part to the Trump tax cut of 2017, the 400 richest Americans in 2018 paid a lower total tax rate, including state, federal, and local taxes, than any other income group in the country, a distinction never equaled in U.S. history.

COVID-19 exacerbates this morally obscene inequality. As many have observed, those who are best positioned to weather the COVID-19 storm are the wealthy and the well-paid workers with steady jobs, good benefits, and safe, stable housing. Those who do not have to work or who can work remotely can most easily accommodate the demands recommended by public health officials and ordered by state governments to minimize transmission—viz., shelter in place, and practice social distancing whenever you leave your home.

The poor simply do not have this luxury, especially those whose work is precarious, who are in low-wage hourly or piecemeal employment with few or no benefits. Contract employees. Delivery drivers. Cleaning and janitorial staff. Home health care providers. Many members of the gig economy.

...for many of these workers, financial security is a contradiction in terms. According to a 2015 study by the Pew Research Center, one in five adults in the United States, or just under 50 million people, lives in a household that is in or near poverty, an increase of more than 100% since 1970. According to the Federal Reserve, roughly one of every eight Americans could not cover an unanticipated expense of $400. Nearly three in ten could cover the cost but would have to borrow or sell something to do so. Other surveys capture different pieces of the same picture. Just under three in ten Americans report that they have no emergency savings whatsoever, and nearly six in ten say they live paycheck to paycheck. Worse, the poor are most apt to have the preexisting medical conditions like diabetes and hypertension that make them especially vulnerable should they become infected.

The second lesson of the virus, therefore, is to make plain to the wealthy what the poor have known for decades. Neoliberal policy has brought millions of Americans to the knife edge of financial and physical ruin, and COVID-19 will push them over.

Precisely when so many among us are suffering and we most need to be communitarians, neoliberalism conditions us to be individualists.

I am not the first to notice the link between COVID-19 and neoliberalism, and I hope I will not be the last. COVID-19 will not destroy this country, but it has exposed better than even the 2008 financial crisis the cruelty of neoliberal policy. If the virus finally weakens the stranglehold that neoliberalism has on policymaking in this country, perhaps the great suffering it inflicts and sorrow it brings will not be all in vain.

Give the $$ to the working class folks.

Tell the rich it will 'trickle up'.

We'll know neoliberalism is over when post-war marginal tax rates return. We're knew how to defeat fascism back then.

Agreed with the analysis but with a big question best put by Thomas Frank in his book What's the Matter With Kansas? Why do the downtrodden keep voting for the people who are making their lives worse?

It's interesting, NPoV, how readily we will scold hoarders who snap up bags of flour and bundles of toilet paper leaving the rest of us to do without but the real hoarder is the one who accumulates wealth and leaves the rest increasingly impoverished. Only we don't scold them. We indulge them. We admire them.

What I fear, Cap, is that leaders with the vision to implement the remedies such as you foresee are a rare species today.

Toby, I hope that hypothesis is put to the test this November. Don't forget that the progressive movement began with Kansas farmers. Teddy Roosevelt delivered his famous "Square Deal" speech to them in Osawatomie, Kansas in 1910.

Things can change and, when they do, it can happen abruptly.

"Things can change and, when they do, it can happen abruptly."
Just like the COVID 19 has changed things rather abruptly!
Now maybe it makes more sense to shut down Site C, once and for all.