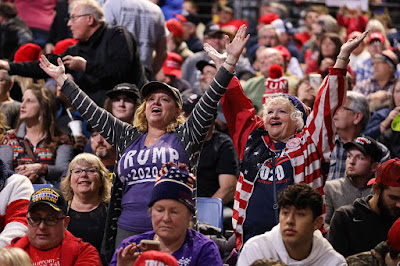 It's said a fish rots from the head first. So does America.

Donald J. Trump has consigned hundreds of thousands of Americans to ugly and unnecessary deaths. Many more will suffer the loss of a mother or father, son or daughter, spouse or dear friend. Massive loss will ensue and nobody knows where it ends.

It's time for a recap of just how Trump crippled America as he gambled so many lives on his gut instincts and abject ignorance. It seems like such a long time ago but it all begins in January.

Now it's Trump's base coming into the crosshairs, the Gullibillies with their cultivated stupidity, that will find the lies they have so readily swallowed are now covered with a lethal virus.


Many of those states followed the lead set by Trump and Fox News, remaining relaxed about the threat and moving astonishingly slowly to put physical distancing controls in place. Florida, under its Republican governor, Ron DeSantis, has echoed Trump’s approach and only imposed a statewide stay-at-home order on Friday despite having the sixth-largest tally of confirmed cases in the country.

Georgia and Mississippi followed suit. Some Republican states including Oklahoma and South Carolina still have no statewide mandatory stay-at-home orders.

Pueyo points out that Republican voters are additionally vulnerable as they have a higher age profile than Democratic voters. Coronavirus makes no distinctions as to party, but it does prey on the elderly.

So it is one of the great paradoxes of Trump’s pandemic that he may have put many of his own loyal supporters in mortal peril. As Konyndyk put it: “Trump has endangered his own supporters by sending out a message in contradiction to the science, and they believed him.”

On March 22, when Nashville’s mayor John Cooper closed nonessential businesses here, it was a terrible blow to companies and shops still reeling from the tornado that tore through Middle Tennessee on Super Tuesday.

Nashville’s courts and schools were already closed, but the crowds on Lower Broadway, the heart of Nashville’s tourist district, showed no sign of dissipating. “Downtown Nashville is undefeated,” tweeted a visitor posting a video of music fans crowded onto a dance floor. Even after the Nashville Board of Health voted unanimously to shut the honky-tonks down, several bar owners said they would not comply unless ordered to do so by the governor of Tennessee.

Such orders have been slow in coming here, and in nearly every other state in the American South. Tennessee governor Bill Lee was slow to end the legislative session and send members of the Tennessee General Assembly home to their districts, slow to close public schools, slow to suspend church services, slow to shutter restaurants and gyms.

... Last week I arrived to pick up a to-go order I’d paid for on the phone and that the owner had promised to put directly into the trunk of my car. But where I expected to find a deserted parking lot, it was business as usual on a sunny spring Saturday. Nashville has received hundreds of reports of similar violations.

...Most Southern states, like Tennessee, did not expand Medicaid, and in those states a perfect storm has gathered force. What does it mean to live though a pandemic in a place with a high number of uninsured citizens, where many counties don’t have a single hospital, and where the governor delayed requiring folks to stay home? Across the South, we are about to find out.

Finally, on April 2, Mr. Lee acknowledged epidemiological reality and issued a stay-at-home order. The rest of the red-state governors will also capitulate to reality before this is all over. But the time for decisive action has long since passed, and their delays, like the president’s, will end up costing thousands of lives.

Viruses are not partisan. Science itself is not partisan. Nevertheless, Covid-19 has become a partisan issue here in the South because our governors have followed the lead of both the president, who spent crucial early weeks denying the severity of the crisis, and Fox News, which downplayed concerns about the pandemic as Democratic hysteria. That’s why every governor who has issued a deeply belated shelter-in-place order is a Republican.

In that March 16 conference call with mayors and county leaders around Tennessee, Mr. Lee offered some advice: “I want to encourage you to pray. I want you to pray for your citizens that are affected by economic downturns, by the sickness sweeping through the state. I want you to know that you’re being prayed for as leaders in your community that you will have wisdom and discernment.”

I, too, pray for my fellow Tennesseans. I pray for the success of researchers racing for a vaccine. I pray for the safety of every medical team working to save lives. But I also pray for our leaders to lead, to put the safety of their citizens far, far above partisan pandering. And when the entire medical community — people who are putting their very lives on the line for us — are begging for help, the answer isn’t prayer alone. It’s also action.

And this is now:

"Remember, we had the greatest economy in the world and then one day we were told we got to shut it down, stop it, tell everyone to stay home = because of this horrible virus. We did that and we did the right thing. But now it's time to open. We have to open our country."

I have lost patience with the US; what will be will be.
Living next to that friggen elephant will have repercussions for Canada and Mexico.
We could well be facing an 'America we are number one' where they are producing self perpetuating Covid 19 virus that knows no borders or time limitations.

Someone should tell Trump that the base material for those , now expensive, masks is produced here in BC at Harmac Pulp Mill which produces most of the world supply of specialty fibre for that product.

I hope this observation is not lost on Justin Trudeau with his negotiations with Trump.

Well, like it or not, we've got a front row seat to an unfolding shit show at the neighbour's place next door. Jesus but do I so wish we had a wall.