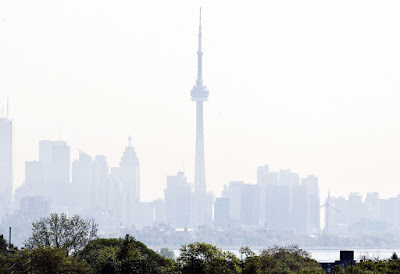 Okay, this doesn't come from social media. It's not another wacko conspiracy theory. It's out of Harvard's TH Chan School of Public Health where researchers have found a link between the levels of air pollution we ordinarily live with and Covid-19 death rates.


In an analysis of 3,080 counties in the United States, researchers at the Harvard University T.H. Chan School of Public Health found that higher levels of the tiny, dangerous particles in air known as PM 2.5 were associated with higher death rates from the disease.

For weeks, public health officials have surmised a link between dirty air and death or serious illness from Covid-19, which is caused by the coronavirus. The Harvard analysis is the first nationwide study to show a statistical link, revealing a “large overlap” between Covid-19 deaths and other diseases associated with long-term exposure to fine particulate matter.

“The results of this paper suggest that long-term exposure to air pollution increases vulnerability to experiencing the most severe Covid-19 outcomes,” the authors wrote.

The paper found that if Manhattan had lowered its average particulate matter level by just a single unit, or one microgram per cubic meter, over the past 20 years, the borough would most likely have seen 248 fewer Covid-19 deaths by this point in the outbreak.

The British prime minister, Boris Johnson, has for many years lived in a city known for its bad air and PM 2.5 pollution, London. He's now occupying an intensive care bed in a London hospital as doctors try to save his life from Covid-19 infection.

Here in Canada you may get a hefty dose of PM 2.5 particles during your daily commute to work. Medical researchers have long recognized a link between these pollutants and heart disease.

I have posted extensively on PM 2.5 and how it kills. Here are a few highlights:

More than 90 per cent of the world's population live with toxic air. PM 2.5 contamination has even been found in the placenta of a newborn.  These particles embed carbon, sulfur, nitrogen and heavy metals in critical organs - lungs and hearts.


A recent comprehensive review concluded that air pollution may be damaging every organ and virtually every cell in the human body, as tiny particles are inhaled, move into the blood stream and are transported around the body. Much of the evidence of harm, from diabetes to reduced intelligence to increased miscarriages, is epidemiological, as harmful experiments on people are unethical. But one study in 2018 found air pollution particles in the placentas of women who had given birth.

Chinese researchers found that PM 2.5 pollution reached such levels that it impacted photosynthesis.


Chinese scientists report that China's smog-clogged atmosphere has taken on aspects of "nuclear winter" and could wreak havoc on the country's already stressed food supply.

He Dongxian, an associate professor at China Agricultural University's College of Water Resources and Civil Engineering, said new research suggested that if the smog persists, Chinese agriculture will suffer conditions "somewhat similar to a nuclear winter".

The World Health Organization says PM 2.5 should not exceed 25 parts per cubic metre of air. In 2015, Shenyang set a record of 1400 ppcm.


China Central Television's web site listed some of the pluses most Chinese might not appreciate, including:

1. It unifies the Chinese people.
2. It makes China more equal.
3. It raises citizen awareness of the cost of China’s economic development.
4. It makes people funnier.
5. It makes people more knowledgeable (of things like meteorology and the English word haze)

And China's military chimed in pointing out that, even as the smog was slowly killing them off, it was also helping defend the Chinese people from foreign threats.

“Smog may affect people’s health and daily lives … but on the battlefield, it can serve as a defensive advantage in military operations,” said an article on the website of Global Times, a nationalist newspaper affiliated to the Communist Party’s mouthpiece the People’s Daily.

Missile guidance that relies on human sight, infrared rays and lasers could be affected by smog in varing degrees, the article said. It explained that tiny particles in the air contributing to air pollution could hinder missile guidance systems.

In 2013, air pollution in Beijing erased the difference between day and night. 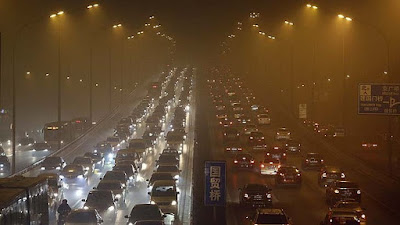 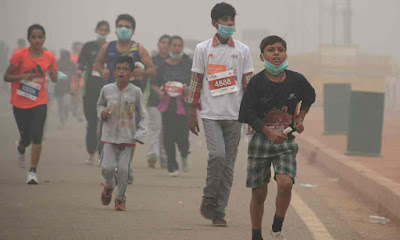 Here in western North America, climate change is bringing longer and more destructive wildfire seasons. At times smoke from fires hundreds of miles inland can reach the coast and cross to Vancouver Island. This stuff is laden with PM 25 and, while coastal residents can fend off the worst of it with modern air purifiers, it plays pure hell on the people of Alberta, especially Calgarians. 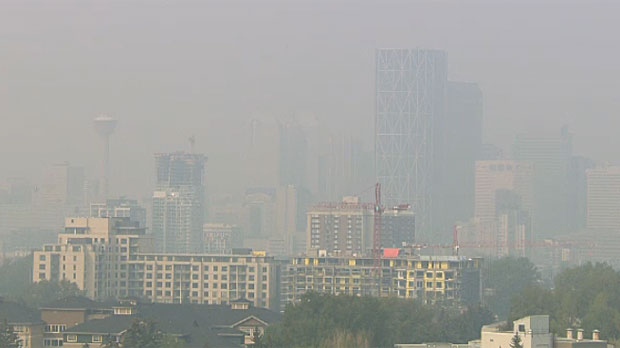 The thing to remember is that these particles embed in your heart and in your lungs. They leave people compromised, vulnerable to respiratory and cardiac disease - and Covid-19.
Posted by The Mound of Sound at 8:42 AM

I think your thoughts have already been noticed here in BC.
There is an almost province wide burning ban in force.
No burning of winter leaves around here!
One household that tried was shut down and the fire extinguished within an hour by the local fire chief.

Wtf, TB? BC still allows open-air burning of leaves?! It's been against the Ontario Fire Code for at least 40 years!

Cap; that's a bit harsh!
I will have you know that for many years BC has been trying to ban forest fires.
We are also banning leaded gasoline as of 2026.