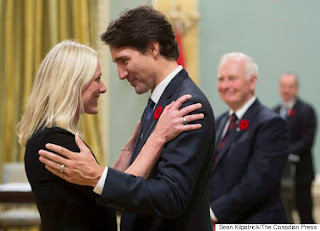 She's failing as an environment minister and she's failing Canada. After a grand (perhaps "grandiose") start full of promise, Catherine McKenna has squandered her opportunity and morphed into an enviromin Stephen Harper could be proud to call his own.

Dr. Eoin Finn, PhD, has taken the measure of McKenna. Here is a partial list of her failures.

You would have to be a wilfully blind Liberal or else our prime minister to not see McKenna for what she has proven to be.
Posted by The Mound of Sound at 6:47 PM

BTW, check this. If carbon pricing is so great, why isn’t it working?

And the fault lies squarely on the shoulders of...

The fault lies with the voter.

May I add that the condescending look on Trudeau's face makes me want to be sick.
I am sure I have seen it before it must be ingrained into his psyche.

Politics have become a cesspool the world over.
I blame the uneducated voter who believes the world is he or she's oyster .
The American dream, the Canadian dream; built on never ending credit.and never ending over consumption.

Since I wrote this word got out that the government will get the Paris climate pact before the Commons on a ratification vote in the next week or two. Trudeau doesn't want to go to the Morocco climate summit in early November without ratification, especially since the US and China have already ratified.

That has Brad Wall in a complete tizzy. He seems to believe that the feds cannot enter a treaty without his say so. This is shaping up to be the next federal-provincial battleground.