As Neoliberal as They Come 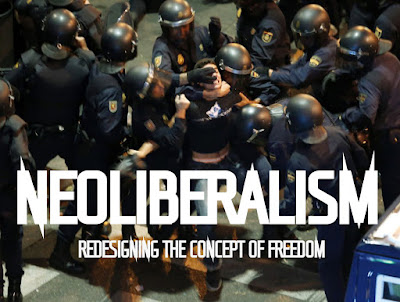 Just as the world is coming to recognize globalism, the beating heart of neoliberal ideology, as a failed concept that fuels inequality and economic stagnation, Justin Trudeau charges to its defence.

Even the high temple of neoliberalism, the International Monetary Fund, has retreated from the promotion of globalism.  John Ralston Saul proclaimed it a dead man walking in 2005. A recent analysis by Harvard prof, Dani Rodrick, found that  “democracy, national sovereignty and global economic integration are mutually incompatible: we can combine any two of the three but never have all three simultaneously and in full.”

Now comes the Dauphin, Justin Trudeau, to defend the honour of the tainted globalism.

In his first event at the G20 leaders' summit, Justin Trudeau urged his peers Saturday to drive away the anti-globalization and protectionist attitudes that have been fuelling "divisive, fearful rhetoric" in different parts of the world.

"We know that isolationism, that building walls, that closing in on oneself does not create opportunity, it does not create growth," Trudeau said from a stage he shared with the presidents of Argentina and South Africa at a Business 20 meeting, which is part of the G20.

"But it's very tempting to fall into divisive, fearful rhetoric. And that's one of the things that we have to be very, very strong and compelling in standing against."

So, Trudeau is fiercely on the side of global economic integration. According to professor Rodrik's analysis (also borne out by others), that means our prime minister is content to continue undermining either (or both of) our democracy and/or national sovereignty. He continues to follow the course set by Stephen Harper and, like our experience under his predecessor/mentor, Canada will be the worse for it. As for the TPP, Trudeau seems ready and eager to ink that horrible deal.

.. we need to be pinning down young middle aged Justin on his & his key people's perspective of growth versus no growth. And exactly why their particulat types of growth are believed advantageous or absolutely neccessary. Of course 'growth' in many many contexts is critical, but the globalization 'growth' seems tied solely to economics, economies, bottom lines, stock markets, profits..

We need China to be a good global citizen. The TPP appears dormant for now, this gives JT room to rehtoric whith out consequense. However as far as saving the Canadian auto industry, we have no leadership.

Apparently we desperately need to grow the economy, infinitely.

Why the feverish obsession? We get the same message from the BC Govt as well.

It's mathematically impossible, and environmentally suicidal, but don't think about that.

From the CBC article above:

"he also expects Trudeau to continue to attract attention for his commitments to invest tens of billions of dollars in infrastructure with an aim of boosting the Canadian economy.

That type of fiscal stimulus, Bernes noted, has been advocated by the International Monetary Fund."

So it's all about adding even more debt. More debt please.

As long as the GDP keeps growing infinitely, we can manage all that debt. No problem. Cough.


Rehabilitating Canada's key infrastructure is not an option. It's a necessity. Much of that infrastructure is old, decaying and, in any case, was never engineered to cope with the more demanding environmental conditions we have brought upon ourselves.

That said, I see no justification for globalizing our infrastructure overhaul. That can and should be undertaken within Canada by Canadian enterprises and workers. It is those companies and those workers, after all, that will be paying the interest and principal on the government's borrowings for the construction.

I just have this feeling that Trudeau has a feeble grasp on the state of the world and of Canada. He acts as though he's still in the 80s.

Growth is healthy until one reaches maturity, Excessive growth is called obesity. Growth run amok is called cancer. See, we recognize diseased growth when it's us but not when it's economic. How did we get so blinded?

Toby, growth can come in many forms. For example, Steady State economics seeks to bring economic activity - resource extraction, production, consumption and waste - into harmony with the environment yet advocates unlimited growth in knowledge and quality of life. That sort of growth is perfectly suited to humanity and will result in greatly enhanced enjoyment of life but it's detached from the GDP growth/profit paradigm.

I think we've reached the point where anti-globalisation/protectionism is probably more harmful than not, which Brexit shows. Tariffs, trade barriers and so on. As global social and economic integration intensifies (add climate change!) the meaning and relevance of states, borders, and sovereignty come into question. In the long term, given the numbers of people on the planet and our links, this is probably a wise thing. In the short term, it's dangerous because so much identity (and injustice and violence) and legal orders are bound up in ideas of sovereignty and nationalism.

In occupations like mine, I pretty much have to be globally mobile in order to find solid work in my field.

The G20 is desperate for GDP growth.

To pursue GDP growth is pointless in an energy-limited world. But there is now way too much debt, and all the $trillions in derivatives associated with that debt.


I would bet on a return to state sovereignty, Boris, and, yes, with that some degree of protectionism. The EU, American and Japanese response to BREXIT strikes me as giving the errant child a smack on the bottom.

Why will global integration fail if it hasn't already as ever more authoritative voices contend? Because it is premised on global stability, societies and their economies ticking over with regularity, dependably. That essential stability is being undermined already. This takes many forms from the rise of negative nationalism and authoritarianism in Europe; to the unrest of fairly large social sectors beset by inequality and stagnation; to the coming impacts of climate change which is still just in its "early onset" phase.

This free trade/anti-regulation model has failed to deliver on its promise and it's been failing for the better part of 40-years. If it couldn't deliver over decades of relative peace, prosperity and harmony, how in hell is it going to begin delivering now? This shared sovereignty business hidden behind the locked doors of ISDS courtrooms cannot last.

No, Boris, I'm afraid upheaval, even war, lies on the horizon and globalism shares the blame for that. Remember that climate change is not a linear process. There will be major shocks along the way. One of them, "climate departure," is expected to begin setting in as soon as 2020. Our economies are not prepared for this. Our infrastructure is not designed for this.

If I'm wrong and if globalism is an unstoppable force, then what must we surrender - state sovereignty, democracy, or both?


Growth is the G20's Holy Grail, Hugh. At this point they may see perpetual exponential growth as the only solution to what they perceive as their problems. There seems a "bunker mentality" element to it.

To my thinking, human civilization is confronted with several threats, each possibly existential, and all of them rooted in three unaddressed problems - climate change, overpopulation and overconsumption of both renewable and nonrenewable resources. Those three are interrelated and we have scant chance of solving any of them without solving them all. That, in turn, requires qualities of leadership so rare that they're simply not on offer today. Ergo, our leaders fall back on GDP growth just as their grandfathers did. At their church that's the limit of their liturgy. Look at Trudeau. We're embarking upon truly calamitous times and there's nothing remotely original coming out of his mouth. He acts like we're still in the 80's.

You have to work pretty hard these days to not see the signs of the magnitude and pace of change already underway. How could we imagine that an economic model foisted on us during the era of Thatcher, Reagan and Mulroney could remain viable today. At my birth, the global population stood at roughly 2.5 billion. By the Reagan era it had burgeoned to 4.5 billion. Today we're nearing 7.5 billion heading to 9+ billion by mid-century. In other words, the world's population, already at a record 2.5 bn at my birth has tripled in just one lifetime. By any standards that's a malignancy. Today we think nothing of it.

I would love to know who Trudeau's advisors are Mound. His constant yammering about doing trade deals is getting annoying. Is their other foreign policies beside free trade?

Considering that these "trade" deals are designed to destroy our sovereignty, Trudeau is sounding more and more ridiculous. He obviously does not know what the ISDS clause means. How is that possible?

To say we either do "free trade" deals or resort to protectionism really reveals how miniscule his knowledge is about these "trade" deals and the corporate elite they benefit.

I notice Freeland has been talking up CETA and how Canadians will benefit from it. The fix is in and Trudeau doesn't have a clue that he is the fixers shill.

Hi, Pamela. I have followed this up with a post setting out my take on Trudeau's pro-globalism remarks and four YouTube items, two from Robert Reich, one from Joe Stiglitz, and the final clip from John Ralston Saul. Their insights absolutely rubbish Trudeau's infantile boosterism. Then again, Trudeau has never made out the case for globalism. He's never presented coherent arguments that could be measured against facts, evidence. His approach is to dismiss the critics, not refute their criticisms. He's barely one step past calling them "poo-poo heads."

The Govt's claims of job and GDP benefits from CETA are very similar to benefits claimed for TILMA, which is a 'trade' agreement between BC and Alberta signed in 2006.

The claimed benefits from TILMA have not materialized as far as I can tell. And TILMA, like CETA, has ISDS.

My question is, does Trudeau really think smiling and shaking hands will pacify the Chinese and keep them calm? There already is a toilet bowl full of trouble in the South China Sea. Canada gets nothing out of the TPP.