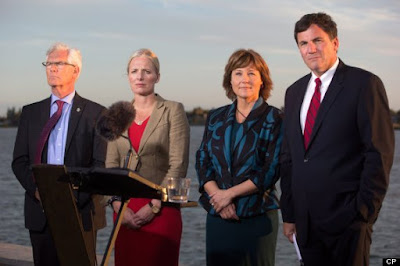 What have those two been smoking? Justin Trudeau, Christy Clark and the stoner's dream of vast wealth to be had flogging liquid natural gas (fracked) to Asia.

It culminated in a photo-op vaguely reminiscent of the Wizard of Oz. There was natural resources minister, Jim Carr, as the scarecrow.  Fisheries minister Dominic Leblanc as the tin man. EnviroMin, Dame Catherine McKenna, as Dorothy, and, in their midst, Christy Clark as the cowardly lion. They were all bundled up to Richmond, B.C. to stage the announcement of federal approval for the Petronas/Lelu island LNG project.

The announcement sparked a wave of criticism and anger, especially among British Columbians growing a bit tired of Justin's bullshit.

But I suppose Trudeau must have thought it was worth it. Wait, what's that? Petronas, the Malaysian energy giant behind the project, confirms it's looking to get out of the deal.

Petroliam Nasional, or Petronas, is weighing options for the project as its finances have been squeezed after crude oil prices have collapsed by more than 50 per cent since mid-2014.

Additionally, the economics of the project have been called into question as LNG prices for delivery into the main markets in northeast Asia have slumped more than 70 per cent over nearly the same time period.

...Other options are also being considered, including putting it on ice, as finding a buyer in current market conditions would be difficult.

Petronas signed on for the project in 2012 through acquisition of Canada's Progress Energy. That year, LNG prices climbed as high as $18.17 per million British thermal units (mmBtu), but have fallen to $5.75 per mmBtu since then.

Were these nitwits in Ottawa and Victoria blindsided by Petronas? Now they're left with egg on their faces, looking like a gang of naive incompetents. Okay, maybe more than just "looking like."
Posted by The Mound of Sound at 1:19 PM

They don't look very happy in that picture, Mound, particularly McKenna. It makes me wonder if they are being squeezed to make announcements they don't like.

Is the approval transferable ? Nobody I have read says anything about this.

J. Trudeau - ever the pragmatist.

The trickier test is the Kinder Morgan pipeline.

Galahad send minion Mrs McKenna to the twilight photo-op
and she also delivered one of the creamiest tweets of all time
some nattering about utilizing traditional indigenous wisdom
and the miracle of science.. is why Woodfiber gets the nod nod wink wink

It made me yesrn for the good old naked agression of Harper minions
Joe Oliver, Peter Kent, Gail Shea shouting what fools we all are
and intil our vast n wondrous resources spill into 'tidewater'
all is lost.. squandered because old tree huggers & foreign charities..
blah blah woof woof ..

Somehow the Canadian landscspe.. and the various resources contained
are seen as some sort of pinata for blind politicians to swing mightily at..
The scramble is limited to adult foreign owned multinationals
tried n true political donors, loyal fans of Israel, stock market thugs
But.. ! We must allow TFW's.. as massive federal subsidies aint enough incentive !

I a sure that Trudeau is well aware of the facts as is industry and those that control finance.
Nothing will change ( yet it will) until those with the most to gain or lose have all their ducks lined up!
I am sure that as we speak those at the upper most of our society are planning a carbon exit!
The carbon exit must reward the 1% before we can go forward..

No one seems more backwards than the UK when it comes to climate change.
Whist they huff and puff on the outside , this is the reality..