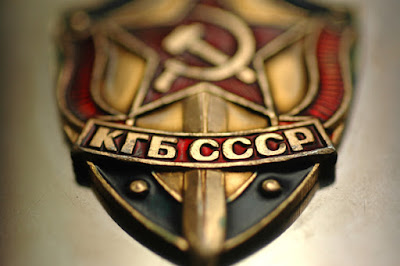 I think this paragraph from Foreign Policy speaks volumes:

Russian President Vladimir Putin, according to Kommersant, is planning a major overhaul of the country’s security services. The Russian daily reported that the idea of the reforms is to merge the Foreign Intelligence Service, or SVR, with the Federal Security Service, or FSB, which keeps an eye on domestic affairs. This new supersized secret service will be given a new name: the Ministry of State Security. If that sounds familiar, it should — this was the name given to the most powerful and feared of Joseph Stalin’s secret services, from 1943 to 1953. And if its combination of foreign espionage and domestic surveillance looks familiar, well, it should: In all but name, we are seeing a resurrection of the Committee for State Security — otherwise known as the KGB.
Posted by The Mound of Sound at 4:17 PM

And the alternative press, well, alternative internet press these days, is so heavily subsidized by the Russians that Putin has been raised to the level of sainthood by people claiming to know what they're talking about. Like Escobar, Cunningham, the Saker, Moon of Alabama, Zuesse and the crowning glory Paul Craig Roberts. Plus a bunch of lesser lights.

You get well-meaning American nitwits who believe this Putin thing as if it were the truth, that he's a man among men, as if he knew what he was up to in the Middle East War and everything else to boot. Plus you also get a healthy dollop of conspiracy theories from people who should know better but choose to believe the CIA is behind everything - they're certainly not choirboys, but a new KGB will be even more ruthless.

I reject the policies of the USA, China and Russia. I have zero interest in their patriotic breast-beatings and wish they'd leave the rest of humanity alone. Pah, as if that will ever happen.