Give Justin a Break. 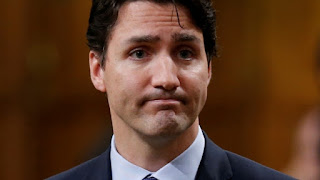 Maybe I've been too hard on Justin Trudeau. Maybe, despite some troubling indications to the contrary, Canada remains a genuine, liberal democracy. Maybe, in the face of the gravest threat to civilization in the history of mankind, it's okay for our prime minister to look the other way. Maybe we're the problem, not him.

I've been pretty critical of this prime minister whom I've called "Slick" drawing the ire of some true believers. I called the last guy much worse - Shifty, the Prince of Darkness, Beelzebub. I think Slick is fair. The guy is a bit of a hustler, master of the photo op, form over substance.

The current prime minister began with great flair and promise. He showed he could do all the easy things, the "feel good" stuff, even if it was the low-hanging fruit. No problems there.

It was when it came to the hard stuff that he proved a disappointment.

The Saudi death wagons deal. He shamed Canada with that one even if it did elevate us, temporarily to be sure, to the 2nd largest weapons supplier to that den of murderous iniquity, the Middle East.

Bill C-51 that completed Canada's transformation into a surveillance state. Yeah, he backed that bit of Harperian perfidy too. The Privacy Commissioner is giving the young whelp a caning over that one today.

Did I mention the TPP and CETA?

Then there's Canada's fossil fuel industry that, under Harper's petro-statehood, achieved both political and regulatory capture. Parliament still remains indentured to the fossil giants who have retained their control of the regulator, the National Energy Board, despite the current prime minister's election promise to clean house. His heel-dragging is so reminiscent of his immediate predecessor.

The biggie, of course, is climate change - the greatest threat to civilization in the history of mankind. We mocked Harper when he unveiled Canada's targets for greenhouse gas emissions. Harper richly deserved our contempt. He promised to reduce emissions by 30% of 2005 levels by 2030 while, like every government before his, doing bugger all to achieve that thin-gruel target.

This issue, the most important, is also the most dangerous politically, especially to a prime minister who shuns the tough calls. Slick just does not seem up to this job.

There's a problem. Actually doing something that will curb Canada's greenhouse gas emissions to any significant degree is going to be painful. Like it or not, we've allowed our country to become a petro-state which creates all sorts of political and economic vulnerabilities. As reported in The Globe last February:

Last Friday, Environment and Climate Change Canada, as the federal department has been renamed, very quietly posted its latest GHG projections for 2020 and 2030. They aren’t good.

...Justin Trudeau came to power with a promise to cut GHG emissions and put a price on carbon. He made a show of attending the Paris climate talks in December, where he got a warm welcome. But that was the easy part. Now he has to find ways to reverse the runaway emissions train that Canada has been riding for years.

Decisions by some provinces to put a price on carbon, through taxes or a cap-and-trade system, should slow the increase in GHG emissions. Higher oil prices that reduce consumption might also help. But to produce the kind of sharp drop needed between now and 2030, Canada will have to amputate, not nip and tuck.

GHG emissions from the oil sands, for instance, will amount to half the increase in total emissions between now and 2030.

...The next four years in the fight against climate change will be critical ones. It’s put-up or shut-up time. Canada must finally meet its targets, while growing the economy at the same time. And it’s Mr. Trudeau who has to get that done.

There's your problem. Trudeau is going to have to wear this. Harper dodged this bullet. Trudeau either has to catch it with his teeth or find his own way to dodge it at the expense of Canada and future generations.

I do sympathize with Slick. It's no fun having to inflict real pain on a populace whose support you're going to need in just a few years time. It would be a different matter if there was some great groundswell from the public calling for strong action to sharply curb emissions only there isn't. Weaning an unwilling public off fossil fuels is going to leave a lot of people sullen or even angry.

The government pretty much stands alone. It's got the environmentalists on one side and they're steamed at the pathetic reductions target and the even more pathetic efforts demonstrated by the government to date. On the other side it has a bunch of premiers, a couple whose provinces are economically dependent on the fossil fuel industry; it has the industry itself that has managed to embed itself both within the legislature and the national regulator; and it has a public that has shown scant interest in the sort of sacrifices that even the meagre targets would create. Can you define "double bind hypothesis"?

It's a hell of a predicament for a relatively spineless prime minister.

The insipid media government media government echo chamber debacle that is 'Canada - Energy SuperPower' is truly annoying me & the rest of the @salamanderhorde .. The trigger words are easy to identify or list & there are some barbarous phrases repeated ad nauseum from within the echo chamber. The Hall o Shame since I started hearing the Sacred Dogma is easy to identify by name and crime. The catechism of holy terminology is writ in stone (to Asia It Must Go ! !) and the secret players who are subsidized to win the game.. are o too obvious as well.. Funny! They all seem foreign owned !

Basically its a hysterical historical re-enactment of Pocahontas meets The Beverly Hillbillies meets Dallas .. Some see it as a success story others as dark comedy.. I see it farce meets tragedy in a dark basement. its not a great place for anyone.. even the torturer.. or dark masterminds making money .. large money off of it. Its the Hudson Bay Company selling beaver pelts to the elite again - minus the courier de bois .. we have pipelines and TFW's now..

The term 'tidewater' grates on me like hauling a baler & loaded haywagon behind your tractor on a nasty sidehill cloverfield ... & still baling.. at dusk.. Recipe for disaster. Three things can happen.. & two of them aint good. You get some more haybales in the barn in case it rains - you hit a ground hog mound with the uphill tractor, baler or haywagon wheels & the whole assembly goes flip flop sideways badly & people get hurt - or one of those damp haybales or a whole whack of them goes mouldy, then superhot in the barn a month or two later.. That's a barn fire folks.. a total disaster.

So let's start talking about dilbit and LNG .. and all the prior stripping or polluting stages that proceeed the miracle of a loaded Asian LNG supertanker blasting whales, sea otter, salmon.. and any other species out of the 'tidewater' .. via sonar - enroute in, or enroute out.. to feeding The Asian Economies via Temporary Foreign Workers.. or those workers exempted via Secret Trade Deal terms. Those terms we were force fed by Tony Clement as translated from the Harper Economic Genius by Ray Novak and the gang in short pants..

Maybe its better explained in Icelandic terms..
'Let's allow Japanese Whalers for Science
to kill off & destroy the wondrous surprise
of Tourism that drives our economy ... '

In Canada eh.. its Tourism + Fisheries Forests Waters Species Culture
that we're expected to just trash.. because - because.. - The Economy aka Asia
I'm not cutting any slack.. aint in the mood for nonsense..
If Asia is driving our economy.. then let's adjust our economy..
Last I looked, I was in Canada eh..

Hi, Sal. On your recommendation I picked up a copy of "The Upside of Down." Homer-Dixon has confirmed my sense that we're pretty much locked in by a series of forces and behaviours that eventually leads to some degree of collapse or, if we're lucky, decline. Sort of like the drunk who cannot reform until he hits rock bottom. Then, if we can break our dysfunctional self-indulgence, we may manage to find the "reset" button and sober up in a post neo-liberal world.

If you would like to hear Thomas Homer-Dixon talk, he can be found on Youtube. This is worth a listen.

Book Discussion: The Upside of Down: Catastrophe, Creativity, and the Renewal of Civilization