The Tyee Asks - Has Justin Out-Harpered the Conservatives? 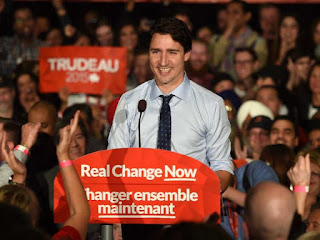 I'm sorry to you Liberal faithful but it's a more than fair question. What happened to all that stuff about the Liberals being progressive? Oh dear.

The key players in Stephen Harper’s government would have been high-fiving after the month Justin Trudeau’s is finishing up.

In September, the Liberal government took a hard line stance with a public union, held steady to the Conservatives’ greenhouse gas targets, approved a liquefied natural gas plant and pipeline assailed by environmentalists and Indigenous groups, and some say signalled it may extend, rather than curtail, powers to spy on citizens granted by the Harper government’s controversial Bill C-51.

For good measure, Trudeau’s Liberals also suggested making it easier for businesses to bring more temporary foreign workers to Canada, taking a position even Harper had backed away from after abuses of the federal program hit the headlines. The Conservatives tightened restrictions on who can hire foreign workers under the Temporary Foreign Worker Program. Earlier this month, a Liberal-dominated Parliamentary committee released a report recommending easier access to the program for businesses.
If you're a devout Liberal, I feel deeply sorry for you. After the better part of a decade spent fearlessly castigating Stephen Harper for these very same things, now it's your boy who is carrying on Shifty Steve's mission. How must that make you feel?
Posted by The Mound of Sound at 12:41 PM

More and more Trudeau appears to be playing a game. Worse, so do almost all politicians. It doesn't seem to matter who wins elections. What citizens think doesn't count. What scientists report doesn't matter to those in control. Politicians think it's all about themselves.

It's funny. I always expected them to be less progressive that they were trying to sell themselves. And even though I consider myself something of a cynic, they went much further toward Harper than I would have expected. And the worst part is that this kind of behaviour feeds political cynicism and contributes to the decay of democracy because it further erodes the trust what little trust is left in the system. The sad thing is that the message here is that if you smile and act like you care, you can get away with the very same basic agenda that Harper had and people think it OK. If that doesn't feed cynicism I can't imagine what does.

I don't know why anyone's surprised by this. For as long as I can remember the Liberal strategy has been to run from the left and govern from the right. The Cons talk a good game about balanced budgets, cutting the public service and restricting immigration but they almost always do the opposite when in power. Harper certainly did.

OTOH, it was Liberals under Chretien and Martin that actually delivered on the Conservative agenda, with a string of balanced budgets, cuts to the PS and immigration at its lowest level in 20 years. Trudeau is simply continuing the Liberal tradition of governing from the right.

There is more at stake now Mound. Previous governments have pushed our democracy to the edge, Trudeau just may be the one to push it over that edge.