Guess What? We Seem to be Destroying Earth's Dwindling Wilderness.


Ten over twenty five. Researchers have found that mankind, our global civilization, has destroyed ten percent of the planet's remaining wilderness over just the past twenty five years. 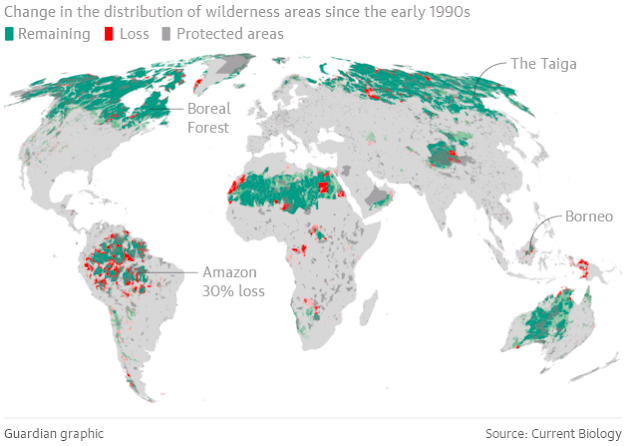 Not a very encouraging picture, is it? The green bits are what is called globally significant wilderness areas.

The analysis defined wilderness as places that are “ecologically largely intact” and “mostly free of human disturbance”, though some have indigenous people living within them. The team counted areas as no longer wilderness if they scored on eight measures of humanity’s footprint, including roads, lights at night and agriculture.
Posted by The Mound of Sound at 9:18 AM

We need to support organizations like the Nature Conservancy of Canada who will buy up land to protect it. And petition Trudeau, of course, for any good it might do.

That is not difficult to understand. People don't seem to like trees. Trees hide people doing nasty things...lol!

Duck unlimited also buy land to protect it.... At this point the problem is much bigger.

Re , Nature Conservancy add to this NALT ( Nanaimo area land trust.
Pissing away hard eared donated dollars $$ on 50 or 100 acre land purchases will do nothing to protect the environment.
I have , sadly, belonged to too many 'feel good' organizations that in the long run accomplished little.

Funny how so many of the humans first crowd see that remaining wilderness as places to build more houses and add more people.

My response to these problems is anchored in the Council of Canadians and Maude Barlow. I think they function best on the policy/advocacy level. It really takes an umbrella organization to try to goad the political caste to any meaningful action and, even then, it's a daunting prospect.

Toby is right and I so wish he wasn't. We seem distracted with our obsession to maximize our over-utilization of every natural resource that it blinds us to the predicament we're creating for our kids and theirs.

The BC Government allowed Islands Timberlands to remove about 50,000 acres of prime forest land from forest reserve land and make it development land under a new company, Couverdon.
Couverdon is majority owned by the BC Government employees union.
The cynical side of me thinks that the BC Liberals facilitated this transaction to pacify both their big business donors and to keep the often environmentally conscience unions mouths shut!!

I am small business and conduct business with the forest industry.
I see and hear what they do whilst logging the Province of BC especially Vancouver Island.
It is not pleasant!
The truck loggers have a huge influence upon the BC Liberals( in name only)
Much of Vancouver Island logging is conducted by organized crime, as is some of the southern interiors logging.

It has been suggested that Christy Clarks Liberals have ties to organized crime !
Forestry and organized crime have been connected world wide often with the same international forestry companies.

TB, do you have anything substantive that links Vancouver Island logging to organized crime? It doesn't seem the sort of industry that produces the returns that organized crime usually pursues.

There was a lot of flack going on in Nanaimo a few years ago .

Are humans the only species that destroys their environment and kills each other off? And we think we are so smart....

In his book Point Counterpoint, Aldous Huxley has one of his characters rail against politicians using expediency as an alternative to properly dealing with sewage. He forecasts Nature wreaking revenge. For sure, Huxley wasn't the only one warning about the effects of pollution 95 years ago. Those who had their eyes open understood what people were doing in the name of profit. Those who warned were either ignored or written off as nuts. It still happens.
David Suzuki has been warning for most of his life; people simply change the channel. We are going over the edge.

Anonymous Anonymous asked, "Are humans the only species that destroys their environment and kills each other off?"

Actually, all species consume and multiply until they have eaten up their entire food supply. When it happens there can be a lot of fighting over any food that is available. Eventually, either predators eat the surplus or there is mass starvation. Nature always brings back a balance and will do so with humans. It won't be fun.

What is curious is that humans, for all their intelligence, still behave like other species.


Boris, thanks for the link. What better way to start the week than with a restorative dose of Andean fatalism?

It's interesting how we have manufactured our own geological epoch, the Anthropocene, killing off the remarkably short-lived Holocene in the process. !!,000 years is a mere heartbeat in the context of epochs.

What remains to be seen is how long the Anthropocene will last especially if we have the predicted major extinction event later this century. If, as some such as Lovelock opine, we enter the 22nd century with a global population slashed to just a few hundred million, our newly minted Anthropocene will be radically affected by our departure. That might be a good thing.


Toby, we cannot ever complain that we couldn't see this coming. As you point out there have been warnings aplenty, backed by historical records from the past 5,000 years of civilization, that societies can cause their own collapse. This time we're doing it on a global scale. Amazing.