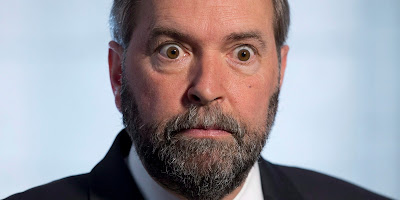 The NDP leader is ready to slam the prime minister as "Harper-lite" when Parliament resumes. That's a pretty easy push as most Trudeau observers have repeatedly noted.

"We're facing a Liberal government that has no plan to reduce greenhouse gases in Canada, that is exporting the weapons of war to a very repressive Saudi regime and that hasn't brought about a single change to Bill C-51," he said, referring to the anti-terrorism bill enacted after the attack on Parliament Hill.

"We've got a lot of questions for the Trudeau government on their failures to deliver on promises and the fact that they are continuing a lot of Stephen Harper's policies."

Unfortunately, Justin Trudeau has come up short each time he faces a difficult problem. When the going gets tough he invariably turns "Harper-lite." He's an eminently likeable lightweight and people such as Brad Wall have shown they have his number. So much Margaret, so little Pierre.
Posted by The Mound of Sound at 9:01 AM

{one of} The most important decision{s} in life:
Choosing the mating partner to spread your genes.
A..non

Beyond the brainless JT, Mulcair seems to have had the spirit sucked out of him. I listened to him on The House and came to the conclusion that he really doesn't give a flying fuck to be honest.

I mean, the lack of collective executive brainpower within the NDP meant he was asked to stay on as leader while they screwed around trying to find someone, anyone, who gave a damn to lead them. That was a stupid move asking him to remain, so stupid it's probably Rule One in any political part's playbook to avoid at all costs. Only Notley is relevant in the NDP right now, the party which conflates provincial and federal membership. So, they're on the ropes.

Then you have Fatty Harper - he starts a consulting firm (let's be honest, who'd hire him as a consultant for anything?) which is a non-starter, so gets some unknown job at a law firm just to pay living expenses. The combined brainpower of the remaining federal Reformacons isn't enough when detonated to blow a hole in a kleenex, so they're out of it.

Thus the Desmarais clan can now run Canada as usual while their cheerleader impresses the average nitwit citizen who gives not two farts about politics anyway during normal times. "Such a nice couple, dear," said the old girl down at the seniors' home. About sums up the level of Canadian political discourse at the moment.