The Canary in the Climate Change Coal Mine 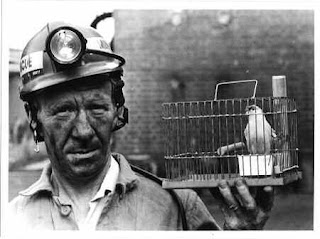 One of the great moral lapses of modern civilization is that we continue to debate the reality of climate change. The denialists are still alive and well and keep peddling their scams about hoaxes or the lack of any real scientific consensus. In many cases the corporate media chimes in where it can to help them out.

In years past, coal miners entrusted their lives to the canaries they carried with them down into the mines. So long as the canary kept chirping they knew the air was safe to breathe. When the canary stopped chirping they scrambled to safety.

Climate change has its own canary and it's one we should trust. It's the insurance industry. Insurance is all about realism. It's the art of risk assessment and actuarial science. They want to write policies. Without policies they have no income, they're out of business. But they also have to take more in, by way of premiums, than they're paying out in losses.

One of the risks that the world's insurers and giant re-insurers closely watch is climate change and its various impacts. Now they're taking a message to the G20 leaders - end fossil fuel subsidies as rapidly as possible - by 2020 at the latest.

The G20 has already committed to phase out “inefficient fossil fuel subsidies that encourage wasteful consumption” over the “medium term”. In May, the G7 nations pledged to achieve this by 2025.

[The insurers said the G20] must commit to an end to assistance for fossil fuel companies within four years, said a joint statement from insurers Aviva, Aegon and Amlin.

The statement read: “Given the urgency of the climate change crisis, underscored by the Paris agreement reached in December of 2015, the next steps on this commitment are long overdue.”

The three insurers manage $1.2tn (£916.9tn) in assets. Aviva’s CEO, Mark Wilson, said: “Climate change in particular represents the mother of all risks – to business and to society as a whole. And that risk is magnified by the way in which fossil fuel subsidies distort the energy market. These subsidies are simply unsustainable.”

Estimates of fossil fuel subsidies vary widely depending on the definition of a subsidy. The OECD reports that its member states contribute $160-$200bn each year to the production of coal, oil and gas.

But the International Monetary Fund (IMF) said this doesn’t account for the damage to the environment and human health, for which governments carry the cost. The IMF estimates this to amount to a staggering $5.3tn a year, or $10m per minute.

“We’re calling on governments to kick away these carbon crutches, reveal the true impact to society of fossil fuels and take into account the price we will pay in the future for relying on them,” said Wilson.

By the IMF's calculations, including the damage to the environment, Canada subsidizes our fossil fuelers to the tune of some $34-billion a year. Ending that within four years is going to be near impossible for our too readily cowed prime minister and his environment minister, Dame Catherine who, after getting spanked by Alberta's enviromin, bleated that moving too fast on climate change emissions could endanger national unity.
Posted by The Mound of Sound at 8:58 AM

this is one of those rare times when I hope that the imperatives of the corporate world, in this case the insurance industry, are able to wield their usually unholy influence on governments, Mound.


It's interesting, Lorne, how industries that benefit from unregulated greenhouse gas emissions do so much to confound action while those whose interests are directly impacted by climate change sign such a different tune.

The insurers, the corporate sector's ultimate risk assessment pros, know what's coming and how it will adversely impact not just their policy holders but the insurers' ability to write policies at prices their customers will accept. The biggies, like Munich-Re, know there are risk coverages they'll simply have to give up, leaving both individuals and corporate clients to their fate.

Perhaps China's decision to finally do something will spur some action, Mound.

The National Post and the Globe and Mail publish global warming articles only to be berated ,in the comments, by those in denial .
Those that deny , in the comments, are by far the majority.