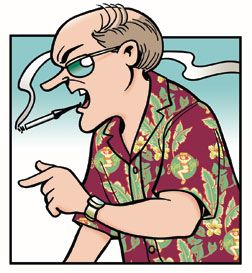 2017. Where is Hunter Stockton Thompson now that we most need him?

Fortunately we have the Sydney Morning Herald's Nick O'Malley to staunch our reportorial hemorrhaging with a delightful look back over a wild, weird and ugly year.  He begins, quite appropriately, with foul-mouth bad-boy, Tony Scaramucci.


Anthony Scaramucci, a man with no experience in either politics or communications, began his duties as one of the most prominent political communicators on Earth on July 25, though his official start date was not to have been until August 15. Having perhaps had time to unpack his office, he then placed an unbidden call to a leading political journalist and unleashed a rant so foul and incoherent that even US President Donald Trump blanched. He was sacked on July 31, a fortnight before he began.
...

I bring up Scaramucci not because he held an important role in public affairs over the past year – he was wind passed in a hurricane – but because his was an emblematic one. Scaramucci was as shameless as he was unqualified, as incompetent as he was profane. He appeared out of nowhere for no apparent reason and he made no sense at all. He left in his wake only vague sense of discomfort and dismay and the echoes of his boasting.

He was 2017 in human form.
...
Lacking the White House's keen sense of the post-modern absurd, much of the press corps set about keeping a tally of Trump's lies. According to The New York Times by mid-December he had told 103 "lies or falsehoods" compared with 18 during the same period for Barack Obama. The Washington Post was far testier, measuring 1628 false or misleading statements in the year to mid-November.

His comeuppance finally came in June 2017, when he faced a trial for securities fraud. For days the court struggled to lock in a jury because, it turned out, so many people hated him.

Juror No. 1: I'm aware of the defendant and I hate him ... I think he's a greedy little man.
Juror No.52: When I walked in here today I looked at him, and in my head, that's a snake - not knowing who he was. I just walked in and looked right at him and that's a snake."
Juror No.28: Is he stupid or greedy? I can't understand.
Juror No.144: I don't think I can [be open-minded] because he kind of looks like a dick.
Juror No.77: You'd have to convince me he was innocent rather than guilty.
Juror No.125: I already sense the man is guilty.
Juror No.59: It's my attitude toward his entire demeanour, what he has done to people.
The court: All right. We are going to excuse you, sir.
Juror No.59: And he disrespected the Wu-Tang Clan.

Shkreli was eventually convicted and released on bail pending sentencing, which was revoked when he offered, via Facebook, $5000 to anyone who could bring him a strand of Hillary Clinton's hair. He is now in jail.

During the US election campaign, Julian Assange's special loathing for Clinton became clear with his own public statements, as did apparent ties between WikiLeaks and Russia and Trump. Nigel Farage, the right-wing Brexit campaigner, paraded around Trump's nomination convention in Cleveland as a VIP guest, only to beat a path straight to Assange's spider-hole in the Ecuadorian Embassy the moment he returned to Britain.

The Trump adviser Roger Stone, who maintains close ties to both his own Russian contacts and the Trump campaign, was able to foreshadow anti-Hillary document drops from WikiLeaks, documents which appeared to come from Russian hacking of Democratic Party computer files. Minutes after The Washington Post released video tape of Trump boasting how he liked to "grab" women "by the pussy", Assange was at work releasing documents damaging to the Clinton campaign.

By August some of the only stable themes of the year were clear. Trump was the most unpopular new president in modern history, having failed to either wedge the Democrats with the infrastructure spending bill or reward Republican loyalty by destroying Obamacare as promised.

But he had maintained the support of his nationalistic base, including the majority of Republican voters. He kept the faith of the former even when a gathering of far right-wing activists groups in Charlottesville, Virginia, descended into violent mayhem, leading to the murder of Heather Heyer, a protester against the rallying racists.

In normal circumstances the political playbook here was clear. A president would unequivocally condemn the group that had been filmed chanting "Sieg Heil" and "blood and soil" and offer the nation's condolences to Heyer's grieving family. Instead in the hours after her death on Saturday, August 12, Trump found an equivalence between the groups of protesters, declaring: "We condemn in the strongest possible terms this egregious display of hatred, bigotry and violence on many sides, on many sides."

This language was reported to have originated with Steve Bannon, the former Breitbart boss who had harnessed the political power of nationalism and hitched it to Trump's wagon early in the presidential campaign. Trump stood by his comments days later, telling reporters: "You also had some very fine people on both sides." And in a peculiarly 2017 twist he went on to plug a local vineyard that he owned. "I know a lot about Charlottesville," he said. "It's a great place that has been badly hurt over the last couple days. I own one of the largest wineries in the United States. It is in Charlottesville."

A look at Alabama's exit polls confirms something significant about this dark, odd year. Trump's first serious electoral loss was inflicted by women, two-thirds of whom voted against Moore. This made sense. In January it had been the vast rallies of women around America – and the world – against Trump the day after his inauguration that had prompted Spicer's tantrum at the White House.

And since October it has been women who have upended the standing social order with revelations of sexual harassment. It began with a story in The New York Times about the relentless abuse of women by the most powerful man in Hollywood, Harvey Weinstein, but since then the #metoo movement, or variants of it, have spread around the world, serving as both an assertion of basic human rights and a kind of proxy war against Trumpism.

Through October, November and December the revelations kept coming. It wasn't just the extent of the behaviour that was being revealed that shocked, but the kinds of behaviour. Weinstein grabbed and groped, harassed and terrorised. He stands accused of rape. But the journalist Lauren Sivan also reports that after she refused Weinstein's advances he blocked her exit from a deserted restaurant and masturbated into a potted plant in front of her. This method of abuse is apparently not unique to Weinstein either. The comedian Louis CK has confessed to similar behaviour in his abuse of women. The po-faced business magazine Forbes was reduced to running an article entitled "Why Would High-Powered Men Masturbate in Front of Women".

By the end of the year just keeping abreast of the news seemed to inflict a kind of psychic tachycardia. On November 29 the online magazine Slate published a blog post entitled, "Today Has Been Harrowing, but at Least It's Friday".

The piece, which was published on a Wednesday, simply listed some of the day's breaking stories. The star anchor of NBC's Today show, Matt Lauer, and the beloved NPR variety host, Garrison Keillor, had been sacked for sexual misconduct; Trump had promoted via Twitter a false video being spread by a British neo-Nazi group; North Korea had revealed it had a missile that could deliver a nuclear warhead to most of the continental United States; a former Bosnian-Croat general convicted of war crimes had killed himself by drinking poison before cameras during a court appearance in The Hague; and the organiser of the Charlottesville rally had announced he would mark the anniversary of Heather Heyer's murder with another far-right rally.

So we have that to look forward to.

It has indeed been a very long year, Mound.


It's been exhausting, Lorne, unlike any before it that I can recall.

The neurotoxins leaking from the rusting barrels in that contaminated waste handler's ship that went down in the Aegean forty or fifty years ago should be omnipresent in the water supply by now. Unless you want to just get with the programme and join the parade it's probably more important than ever to stick to impermeable aquifer or distilled products.

Wow, quite the retrospective. I am hoping 2018 is a much better year.

On that note, with you all the best for the New Year!


And a terrific New Year to you and your fella, BY. I think both of you have done awfully well.

JT and the brains trust have decided that Iran is a bad place. This is part of the camouflage our dear western governments, barring those of France and Germany who have made large investments in Iran since Obama lifted sanctions, are giving yet another CIA/State Dept attempted coup. Pay a few street drifters to have a riot, shoot a couple and blame it on "heavy-handed police tactics". Then stand back and watch the "fun". Why, Iran had such a great time under the Mad Dog Shah of Iran, yessir, they want someone like him back. Yeah, no kidding, they want to be FREE!

Syria was much the same setup; US oil interests were VERY unhappy when Assad refused a natural gas pipeline from Qatar to Turkey in 2010 to compete with Russky gas. Then 2011 arrived.

Venezuela's Maduro has been pilloried by that attack dog Freeland, and we are informed the last election was rigged, when even the UN said it wasn't, by any means. But JT and Freeland know best and never watch Telesur or read independent comment - upper middle class and rich Venezuelans were upset that Maduro was spending THEIR oil money on the great unwashed, so a BS story had to be concocted by neoliberals, especially when oil prices tanked. Canadians are treated like two-year-olds willing to believe anything. Commies in Venezuela usually gets the redneck crowd squawking.

Yup, if you decide to buck the US of A and its ravenous bankers and oligarchs, your country will be on the list for a coup. Trump has been trumped on neocon/Israeli policy and so we will have more fomented revolutions, while CBC news reports of zero truth like those every hour on radio today keep us all brainwashed. Makes me want to spit. I've put up with 70 years of this horse manure and it's getting old like me.

Since JT likes being a petty potentate and wants no US takeover here, he ensures Canada is in lock step with US and israeli foreign policy. So Iran bad, wery, wery bad, heap bad. I feel sorry for the innocent lives about to be lost in Iran for mere bucks, Yemenis with no food suffering under Saudi attack with US, Brit and Canadian arms.

We're part of making the bankers and oligarchs wealthier than Croesus if we parrot US horse manure, but that's the plan. Serfdom has never been made plainer.