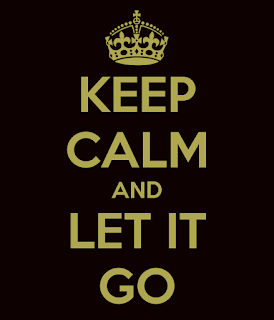 One of the hardest things most of us endure in life is letting go. Whether it's the death of a loved one, a failed relationship or a particularly hurtful personal slight, letting go can be an ordeal.

We have now embarked on an era where letting go will be a constant, inescapable requirement. Of necessity we will have to become accustomed to letting go.  This came through loud and clear when I read an article by Grist writer, Eric Holthaus, "Let It Go, The Arctic Will Never Be Frozen Again."

The region is now definitively trending toward an ice-free state, the scientists said, with wide-ranging ramifications for ecosystems, national security, and the stability of the global climate system. It was a fitting venue for an eye-opening reminder that, on its current path, civilization is engaged in an existential gamble with the planet’s life-support system.

In an accompanying annual report on the Arctic’s health — titled “Arctic shows no sign of returning to reliably frozen region of recent past decades” — the National Oceanic and Atmospheric Administration, which oversees all official U.S. research in the region, coined a term: “New Arctic.”

Until roughly a decade or so ago, the region was holding up relatively well, despite warming at roughly twice the rate of the planet as a whole. But in recent years, it’s undergone an abrupt change, which now defines it. The Arctic is our glimpse of an Earth in flux, transforming into something that’s radically different from today.

It was jarring when I first read those three words, "let it go." It implies an acceptance of defeat, some measure of giving up. It's not hard to accept intellectually. Scientists have given us ample warning, an evidence and fact-based "heads up." Yet it's extremely difficult to accept, for me at least, on an emotional level. If this fight is lost before it even began what other defeats are already in the works, coming our way? On what issues will we fight back? On what issues will we simply concede?
Posted by The Mound of Sound at 10:43 AM

When; the Arctic melts to the degrees suggested by Science , then the UK, now basking on warm ocean currents from the Caribbean , will suffer uncontrollably.
Northern Europe will likely suffer the same just as it becomes the recipient of climate refugees from the equatorial regions( it's already started)
Naturally the same will apply to North America !!
Why does Trump have to build a wall?

Yet another reason to read Gwynne Dyers , Climate Wars.

.. I 'get it' .. the 'letting go' ..
Of the entire artic though? That''s up there with .. uh
accepting the Rapture... or Donald Trump as president
Its the mingling of tragic events versus sheer bufoonery

I know we are saying goodbye to cetaceans in our oceans
to be replaced by Asian supertankers..

Wild salmon replaced by the farmed salmon infecting them

Its gets ugly.. in shades of grey..
then its suddenly dark, very dark..

I've not yet begun to fight..
(John Paul Jones)

Hell.. I'm just warming to the task..
a little late.. but highly motivated
with some interesting skill sets..
and I suspect.. know, trust, certain..
there are far more 'seeds' like me
they think buried..