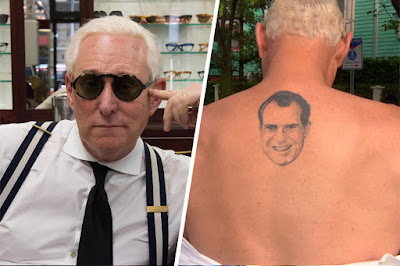 He's got a thoroughly creepy tattoo of Richard Nixon's face on his back between his shoulder blades and he's got the sexual appetites of a goat although he describes himself as a "libertine." He's an old pal of Donald Trump and today a Trump loyalist. During the election campaign he undertook trips to London to liaise with Julian Assange.

One Trump ally is making plans to commercialize Trump’s downfall. Longtime Trump confidant Roger Stone told me he is working on a book titled The Unmaking of the President as part of a multi-book deal with Skyhorse Publishing. (Last fall, Skyhorse published Stone’s campaign account, The Making of the President 2016.) “I’ve been writing it as we go along,” he told me.

Stone said he got the idea to write a book chronicling Trump’s removal from office after watching how the White House responded to the Robert Mueller investigation. “It’s painfully obvious Mueller will bring charges,” Stone said. “The theory is Mueller will indict him on some process-related matter” such as obstruction of justice. “The only people who don’t seem to know it are Ty Cobb, [John] Dowd, and the president.”

Stone also believes Trump could be removed from office because he has surrounded himself with disloyal Cabinet members and other top officials. “Nikki Haley stuck a knife in his back,” Stone said, referring to her comments about Trump’s accusers. According to Stone’s back-of-the-napkin tally, only two Cabinet members would vote against invoking the 25th Amendment, the provision by which the president can be deemed unable to serve (Congress would have to vote by a two-thirds majority to remove him permanently).

Stone made it clear he’s not writing the book because he wants to, he’s just planning ahead. “I hope it’s a book I don’t have to publish,” he said, expressing dismay at Trump’s political prospects. “I just don’t think Trump is being told the truth about how bad things are.”

.. as always, lord tRumph follows a lifelong pattern.. gravitating between meals & tv consumption - to self ego feeding opportunities. His only other past-time aside from hassling, hustling, assaulting & insulting women.. is screwing people he feels are below him.. ie the rest of the entire world & young girls or any woman of course. He truly is redefining 'despicable' as THE Ugly & ludicrous 'Ugly American' & is busy exceeding the worst projections any pessimistic observer had projected.

If & when he retreats to Mar A Lago & Trump Tower with full secret Service protection for life.. it will be in a b
aze of glory - albiet in his own doddering & deluded mind. The self absorbed mindless POS has accomplished nothing positive in his entire life - and whatever 'legacy' is attributed to him must need be referenced to a what travels from his golden toilet atop an overflowing septic tank

Pants down around his knees, encamped upon his golden throne.. teeeting malicious pedantic idiocies at the world, that's The Donald for sure.. Glad former general Kelly sees fit to 'honor' such a loser.. It certainly points to what abject losers Kelly et al must be


I hope Stone's assessment of Trump's inner circle is correct, Sal. Even then, swapping Pence for Trump might not be much of a blessing.

As for Kelly I think expectations were unjustifiably inflated. The general rank can be intensely, dog eat dog, political. Once those stars go up there are a lot of sharp elbows in the race to the top.

"swapping Pence for Trump might not be much of a blessing."
Yes !

the contrarian I love to listen to weighs in:
"Fire Mueller, forget Russiagate, do some real politics
Forcing Trump to leave through impeachment or disgrace is titillating but ultimately resolves nothing, writes Rick Salutin."


Thanks for the link, NPoV. IMHO, Salutin is talking through his hat on this one. One line is his undoing - "Lest we forget, democratic politics is about the people making decisions themselves."

He's plainly dismissive of Mueller's investigations and yet, at its core, is the manipulation of the public's decision-making process. Democracy doesn't depend on people making decisions but people making informed decisions free to manipulation by outsiders. Salutin fails to grasp the distinction.