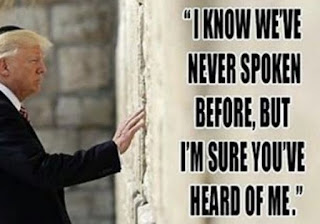 Trump has broken with previous administrations to announce that the United States will recognize Jerusalem as the capital of Israel.

The question on everyone's lips is "why?" He wasn't compelled to do it. If anything the decision seems ill-thought out, even capricious. It threatens to set the region on fire. The Guardian is calling it "diplomatic arson."

The history of Jerusalem is vast and full of turmoil. The name, Urusalima, was bestowed by Mesopotamians around 2400 BC abut 1500 years before the Israelis first turned up.

"During its long history, Jerusalem has been destroyed at least twice, besieged 23 times, attacked 52 times, and captured and recaptured 44 times.[8] The part of Jerusalem called the City of David was settled in the 4th millennium BCE.[9] In 1538, walls were built around Jerusalem under Suleiman the Magnificent. Today those walls define the Old City, which has been traditionally divided into four quarters—known since the early 19th century as the Armenian, Christian, Jewish, and Muslim Quarters.[10] The Old City became a World Heritage Site in 1981, and is on the List of World Heritage in Danger."

According to the Israeli version of the Great Book of Murderous Myths and Fatal Fantasies (as opposed to the slightly different Christian and Islamic versions), it was God herself who bestowed Jerusalem on the Israelis for all time or at least what remains of time. God means for them to have it. God doesn't want anyone else to have it. God has spoken. God is great. God is good. As an outsider it strikes me as curious how anyone who picks up any of the versions of that book gets so f#@ked up.

Now we know Donald Trump doesn't read books and I'm pretty sure he hasn't squandered a lot of time studying his Bible. I'm sure he still thinks Amos was a black guy on the radio who had a partner named Andy.

So if Trump isn't acting on some deeply held religious conviction, why is he going to such lengths to ruffle feathers? If there's one discernible trait in this presidency it's been Trump's predilection for doing things that will piss someone off, often a lot of someones. He has repeatedly offended and alienated America's allies, even the closest. He has embraced the Thuggees, anti-democratic authoritarians such as Putin, Orban, Erdogan, Netanyahu, Poland's Duda, even the murderous Rodrigo Duterte of the Philippines. He's like a bull in the china shop of decency. Why?

I may have stumbled across the answer in my most recent negotiation with my beagle, Buddy.  A long time ago someone tipped me off. When you ask a beagle to do something, the hound's first reaction is, "What's in it for me?" If the beagle doesn't like the deal as he sees it, he just looks the other way. If he sees what you're asking is a sweet deal - for him, he's with you. I don't mean to disparage beagles with comparisons to Trump, but...

What if Trump sees the presidency primarily as a business opportunity? He gets to dole favours out of the public purse with an expectation of future accommodations of the the Trump business empire for his kids. The Mango Mussolini has always talked in the context of "deals." He's proud of his ghost-written book, "The Art of the Deal." That was pretty much the entire curriculum of his faux college, Trump University. He promised his supporters, the Gullibillies, that he would make "the best deals" for America, renegotiating everything.

Trump has always put his personal interests ahead of all others. He's legendary for screwing those who risk dealing with him, put trust in him. He monetizes their confidence and trust and often leaves them empty-handed and bitter. That's all he knows how to do. Mentally the man is not well. Intellectually he's every bit as infirm. His greatest, perhaps only real skill, is to shamelessly exploit opportunities especially in perceived weaknesses.

Why then would he not exploit the presidency? By zigging where his predecessors all zagged, he can make some people beholden to him. He can accumulate markers to be called in at another time.

Look at what he has done in his first year in office. Everything from rampant deregulation, gutting the EPA, defunding government and the social safety net, tax relief for the richest of the rich (including familia Trump), it's all been to benefit a class of people, the sort who know to repay favours.

It's not a reach, not at all, to see Jerusalem as another example of Trump's modus operandi in action. Sure it will set back if not destroy any chance of Middle East peace and it's almost certain to result in a lot of deaths for years, perhaps generations to come, but it's an opportunity that can be monetized by the empire in years to come. The old bastard is in it for the deal.

Trumps decision on Jerusalem would seem to be a gift to his christo fascist supporters.
This group are fanatical and well organised and totally blind to truth , especially scientific truths.
They are peas from the same pod or 'nut's from the same shell.

When it comes to Jewish ties, no GOP candidate trumps Trump https://www.timesofisrael.com/when-it-comes-to-jewish-ties-no-gop-candidate-trumps-trump/

It looks like Trump wants a favour from Netanyahu.

"It looks like Trump wants a favour from Netanyahu."
To keep the file on him in safe place?

"It looks like Trump wants a favour from Netanyahu."

Birds of a feather!!

Oops, the mask fell off. Looks like the US can no longer play the part of "honest broker." It's about time that charade ended anyway. Time for another country to take the lead - the Middle East is no place for a dotard like Trump.

Looking back on it, and disregarding the Adelson and Christian Zionist factors, I realize that we had to have known that he couldn't in any case have left this one sitting there.

Mary, the mother of Jesus, commonly referred to as Mary, Mother of God, Saint Mary, Virgin Mary and Blessed Virgin Mary, is one of the most admired figures in Scripture and considered by many to be the greatest of all Christian saints. She was a willing servant who trusted God and obeyed His call.

What I'm wondering is ...if Israel is a sovereign nation in its own right, why is it the prerogative of The President Of The United States to decide what the capital city of that country should be rather than that of the Israeli Prime Minister (Netanyahu), his administration and its lawmakers?

I understand Netanyahu is on-board with Trump's decision, but is his criteria based primarily on Israel's need for continued U.S. support or does it also represent an autonomy-based decision on Israel's part?

Tal, ever since the 67 war and the Israeli occupation of the Palestinian territories, Israel has been trying to establish what Netanyahu calls "facts on the ground." Under international law no nation is permitted to annex conquered territory and must abide by a host of provisions required of occupying powers. For half a century Israel has flouted these laws and now it is making its bid for annexation/ethnic cleansing of the Palestinian homeland. Jerusalem is a hot spot because it has the holy sites of Judaism, Christendom and Islam.

Most nations refuse to tolerate the Israeli annexation of Jerusalem and insist that the capital remain in Tel Aviv. Trump is now breaking from that consensus. The Palestinians and other Muslim states see this as a trigger for the expulsion of the Palestinians from their lawfully-recognized homeland.

It comes back to the Israeli conundrum. They can't absorb Palestine into a unitary state because that would give the Arab population enormous political power in what they insist must remain a Jewish state. The only other way to continue the status quo is to render the Arab population stateless, transforming Israel into a pure Apartheid state. The third option is outright ethnic cleansing, driving the Palestinians into Jordan.

The world, save for Canada and the United States, stands against Israel on the Palestinian issue. The world has the high ground on international law. Israel is a rogue state and, by backing it unquestioningly, so too are Canada and the US.

The United Nations gave Israel it Status as a country after WWII....can't they take it away?


That's a moot question, Anon. There's no political will in any corner, perhaps including the Arab world, for that sort of thing.