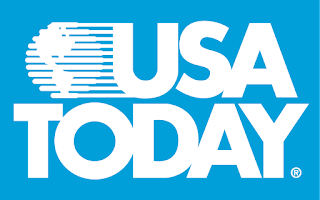 The editorial board of USA Today decided to do a long overdue drive by on the Mango Mussolini that should be music to a lot of ears.

"A president who'd all but call a senator a whore is unfit to clean toilets in Obama's presidential library or to shine George W. Bush's shoes: Our view"


With his latest tweet, clearly implying that a United States senator would trade sexual favors for campaign cash, President Trump has shown he is not fit for office. Rock bottom is no impediment for a president who can always find room for a new low.

This isn’t about the policy differences we have with all presidents or our disappointment in some of their decisions. Obama and Bush both failed in many ways. They broke promises and told untruths, but the basic decency of each man was never in doubt.

Donald Trump, the man, on the other hand, is uniquely awful. His sickening behavior is corrosive to the enterprise of a shared governance based on common values and the consent of the governed.

It should surprise no one how low he went with Gillibrand. When accused during the campaign of sexually harassing or molesting women in the past, Trump’s response was to belittle the looks of his accusers. Last October, Trump suggested that he never would have groped Jessica Leeds on an airplane decades ago: “Believe me, she would not be my first choice, that I can tell you.” Trump mocked another accuser, former People reporter Natasha Stoynoff, “Check out her Facebook, you’ll understand.” Other celebrities and politicians have denied accusations, but none has stooped as low as suggesting that their accusers weren’t attractive enough to be honored with their gropes.

If recent history is any guide, the unique awfulness of the Trump era in U.S. politics is only going to get worse. Trump’s utter lack of morality, ethics and simple humanity has been underscored during his 11 months in office.
...

It is a shock that only six Democratic senators are calling for our unstable president to resign.

The nation doesn’t seek nor expect perfect presidents, and some have certainly been deeply flawed. But a president who shows such disrespect for the truth, for ethics, for the basic duties of the job and for decency toward others fails at the very essence of what has always made America great.

It is a shock that only six Democratic senators are calling for our unstable president to resign.

Not really.
The dirty underbelly of the USA has been exposed for what it is and all the excuses the world has made for them,the USA, have been found to be lacking.

As repulsive as the Republicans are the Democrats can match them step by step with the festering boil that is Hillary Clinton.
Clintons wish to mould world events is just as dangerous as Tump and the republicans.

Let's see now ...
...he's 71 years old, excessively wealthy.
...overall, doesn't have all that much longer to live, given an average lifespan (20 more years tops, give or take). And at risk for all the various forms of dementia.
Hence, not concerned about any kind of possible repercussions coming back to bite him, as he won't be around long enough for the effects of such to prevent him from already having had a prosperous and privileged life----so "Anything goes!".
Figures since he HAS "high status" and "prestige" he doesn't need to bother with etiquette or "wasting time and effort on" civility.
His position is his "shield".


Fortunately, TrailBlazer, I'm not burdened with your sense of equivalency between Hillary Clinton and Trump. Although the media still pay attention to her, Clinton is a spent force. I was never fond of HRC but I'm not obsessed with her as are many of her fiercest critics. Trump, however, is an ongoing malevolence.


Given Trump's lousy physical condition and his even worse diet and lifestyle (sleep deprivation) how much longer can he endure the presidency? We've seen the toll it exacts on younger, much fitter men. Clinton, Bush, Obama - all noticeably "aged out." Reagan developed dementia/Alzheimer's. Trump is already showing signs of mental fatigue/impairment. I think he'd fare very poorly on a mental cognition test.

Fortunately, TrailBlazer, I'm not burdened with your sense of equivalency between Hillary Clinton

Unfortunately, Clinton IS a factor of USA politics; ignore her at your( and the USA's) peril.

Reagan on life support still influenced the USA simply because that is what they wished to hear!!!
Reagan still does and enjoys Sainthood within the USA.

We have to discuss the deeds of what politicians do not what they say.
Sadly the electorate requires heros and winners no matter what the cost or outcome.
We were no different in our expectations of Horgan!

It's a stretch to equate HCR with Reagan. RR, during his active political career was - and to some extent still is - revered. Neither candidate in the last presidential election had anything resembling Reagan's popularity. Both parties ran terrible candidates. The Democrats could have run a pelt and trounced Trump. The best thing Donald had going for him was a deeply unpopular Democrat, Hillary. Yes, she's still garnering attention but that's because the Dems have yet to rally behind a new leader. No one in that camp has any illusions that Hillary could prevail over any Republican in the future.