The Decadent States of America 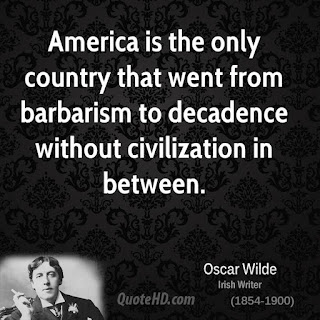 Has America succumbed to decadence, the terminal stage of the once great state? Foreign Policy's James Traub sees clear parallels between modern day America and  Rome at its end or Louis XVI's France or the dying days of the Habsburg empire.

In The History of the Decline and Fall of The Roman Empire, Edward Gibbon luridly evokes the Rome of 408 A.D., when the armies of the Goths prepared to descend upon the city. The marks of imperial decadence appeared not only in grotesque displays of public opulence and waste, but also in the collapse of faith in reason and science. The people of Rome, Gibbon writes, fell prey to “a puerile superstition” promoted by astrologers and to soothsayers who claimed “to read in the entrails of victims the signs of future greatness and prosperity.”

Perhaps in a democracy the distinctive feature of decadence is not debauchery but terminal self-absorption — the loss of the capacity for collective action, the belief in common purpose, even the acceptance of a common form of reasoning. We listen to necromancers who prophesy great things while they lead us into disaster. We sneer at the idea of a “public” and hold our fellow citizens in contempt. We think anyone who doesn’t pursue self-interest is a fool. ...A decadent elite licenses degraded behavior, and a debased public chooses its worst leaders. Then our Nero panders to our worst attributes — and we reward him for doing so.

“Decadence,” in short, describes a cultural, moral, and spiritual disorder — the Donald Trump in us. It is the right, of course, that first introduced the language of civilizational decay to American political discourse. A quarter of a century ago, Patrick Buchanan bellowed at the Republican National Convention that the two parties were fighting “a religious war … for the soul of America.” Former Speaker Newt Gingrich (R-Ga.) accused the Democrats of practicing “multicultural nihilistic hedonism,” of despising the values of ordinary Americans, of corruption, and of illegitimacy. That all-accusing voice became the voice of the Republican Party. Today it is not the nihilistic hedonism of imperial Rome that threatens American civilization but the furies unleashed by Gingrich and his kin.

Trump functions as the impudent id of this culture of mass contempt.

Of course he has legitimized the language of xenophobia and racial hatred, but he has also legitimized the language of selfishness. During the campaign, Trump barely even made the effort that Mitt Romney did in 2012 to explain his money-making career in terms of public good. He boasted about the gimmicks he had deployed to avoid paying taxes. Yes, he had piled up debt and walked away from the wreckage he had made in Atlantic City. But it was a great deal for him! At the Democratic convention, then-Vice President Joe Biden recalled that the most terrifying words he heard growing up were, “You’re fired.” Biden may have thought he had struck a crushing blow. Then Americans elected the man who had uttered those words with demonic glee. Voters saw cruelty and naked self-aggrandizement as signs of steely determination.

Perhaps we can measure democratic decadence by the diminishing relevance of the word “we.” It is, after all, a premise of democratic politics that, while majorities choose, they do so in the name of collective good. Half a century ago, at the height of the civil rights era and Lyndon B. Johnson’s Great Society, democratic majorities even agreed to spend large sums not on themselves but on excluded minorities. The commitment sounds almost chivalric today. Do any of our leaders have the temerity even to suggest that a tax policy that might hurt one class — at least, one politically potent class — nevertheless benefits the nation?

There is, in fact, no purer example of the politics of decadence than the tax legislation that the president will soon sign. Of course the law favors the rich; Republican supply-side doctrine argues that tax cuts to the investor class promote economic growth. What distinguishes the current round of cuts from those of either Ronald Reagan or George W. Bush is, first, the way in which they blatantly benefit the president himself through the abolition of the alternative minimum tax and the special treatment of real estate income under new “pass-through” rules. We Americans are so numb by now that we hardly even take note of the mockery this implies of the public servant’s dedication to public good.

Here is something genuinely new about our era: We lack not only a sense of shared citizenry or collective good, but even a shared body of fact or a collective mode of reasoning toward the truth. A thing that we wish to be true is true; if we wish it not to be true, it isn’t. Global warming is a hoax. Barack Obama was born in Africa. Neutral predictions of the effects of tax cuts on the budget must be wrong, because the effects they foresee are bad ones.


It is, of course, our president who finds in smoking entrails the proof of future greatness and prosperity. The reduction of all disagreeable facts and narratives to “fake news” will stand as one of Donald Trump’s most lasting contributions to American culture, far outliving his own tenure. He has, in effect, pressed gerrymandering into the cognitive realm. Your story fights my story; if I can enlist more people on the side of my story, I own the truth. And yet Trump is as much symptom as cause of our national disorder. ...One of our two national political parties — and its supporters — now regards “science” as a fighting word.

...What is new and distinctive, however, is the lack of apology or embarrassment, the sheer blitheness of the contempt for the public good. When Teddy Roosevelt called the monopolists of his day “malefactors of great wealth,” the epithet stung — and stuck. Now the bankers and brokers and private equity barons who helped drive the nation’s economy into a ditch in 2008 react with outrage when they’re singled out for blame. Being a “wealth creator” means never having to say you’re sorry. Enough voters accept this proposition that Donald Trump paid no political price for unapologetic greed.

The worship of the marketplace, and thus the elevation of selfishness to a public virtue, is a doctrine that we associate with the libertarian right. But it has coursed through the culture as a self-justifying ideology for rich people of all political persuasions — perhaps also for people who merely dream of becoming rich.

Decadence is usually understood as an irreversible condition — the last stage before collapse. The court of Muhammad Shah, last of the Mughals to control the entirety of their empire, lost itself in music and dance while the Persian army rode toward the Red Fort. But as American decadence is distinctive, perhaps America’s fate may be, too. Even if it is written in the stars that China will supplant the United States as the world’s greatest power, other empires, Britain being the most obvious example and the one democracy among them, have surrendered the role of global hegemon without sliding into terminal decadence.


Our political elite will continue to gratify our worst impulses so long as we continue to be governed by them. The only way back is to reclaim the common ground — political, moral, and even cognitive — that Donald Trump has lit on fire. Losing to China is hardly the worst thing that could happen to us. Losing ourselves is.
Posted by The Mound of Sound at 9:59 AM

"Sheer blitheness for the contempt of the public good." It's astounding and frightening.


One of my readers, Jay, linked to a twitter feed that reported Republicans have said that they're "cashing out" with this tax cut bill. They don't care what's good for the voters or the country. Their benefactors, the guys who've been pulling their strings for years now, finally get what they want and will reward their Congressional minions accordingly. The Repugs in the House and the Senate don't care about public anger. They're not planning on staying around. That would explain why some, such as Lindsey Graham, quite openly and shamelessly admitted that this tax scam is the price the donor class demanded.