It's Just a Sense, a Feeling. 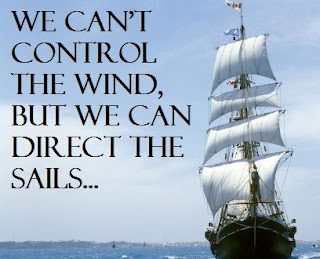 If there's one thing we need to get much better at it's learning to deal with the unexpected.

It's a huge understatement to note that, on so many fronts, we're already passing through uncharted waters. Human lifespans being as brief as they are, life experiences can be very limited in depth and breadth. And so when change sets in, seismic change, and the ground begins shifting beneath your feet it's natural to become confused, disoriented.

A lot of what's happening today, the early onset stuff, was not foreseen by us just a decade or two ago. It can be incredibly depressing to think back to the 80s and 90s and the relative stability and security we enjoyed in those days and then look at what is upon us now.

Many science types tell us we're on the verge of a mass extinction event, the sixth in Earth's history. Extinction. Try to wrap your head around that. Delving into that idea reminds us that we, and most of the species trying to share this planet with us, are merely the latest iteration of life on Earth. We are the dominant species today but we weren't in earlier times. The human species didn't exist in these previous eras. Other life forms did going back about 3.8 billion years. Some other life form was the dominant species in each of those eras.  And those former species, plant and animal, died and were buried and became the coal, oil and gas that we've used to trigger the extinction of life in our era. Ah, the irony.

Our base of knowledge today is greater than at any time in the history of mankind. We amass data faster than we can hope to process it. There is no much information at your fingertips and yet you can only access it in slivers and even that in a most haphazard fashion.

We once imagined a future extending into something akin to infinity, at least in a practical context. Hitler proclaimed a thousand year Reich. Now, as our knowledge base expands at explosive rates, we struggle to foresee where we might be twenty, thirty or forty years down the road. We just don't know.  It wasn't that long ago that the Intergovernmental Panel on Climate Change warned that, if we didn't slash greenhouse gas emissions and pronto, dire change such as the loss of Arctic sea ice might be upon us by the end of the century, 2100. They were attempting to peer 90 years into the future and yet they were out by 70 years. It can feel like you're driving down a highway at full speed in a dense fog.

Our demonstrated inability to gauge the pace of the onset of climate change, arguably the greatest threat to mankind and life on Earth generally, is unsettling. What else have we overlooked? What else have we gotten wrong?

Even those who resist doing anything to mitigate against climate change, i.e. abandoning fossil fuels, are more open to adaptation strategies. In Florida, for example, they might refuse to accept the link between global warming and sea level rise and yet they're quite open to planning to adapt to sea level rise. However how do you adapt unless you have a pretty good idea of what is coming and by when? The later you leave it the fewer good options you may have remaining when you do decide to act. On the other hand should you act too soon, perhaps on flawed assumptions, you may squander irreplaceable assets pointlessly. Decisions, decisions.

Imagine how well that wolf would have dined had the piggy community been as profoundly divided as our societies are today. Imagine if those piggies were as divided economically, politically, racially and socially as we are today, hostile and distrusting of each other.

What if there had been a political pig caste who groomed the little piggies with lies and fear and anger and suspicion, manipulating them for the political caste's own benefit? Isn't that what's happening to us today? Our trust in government and in each other is being eroded, diluted.

I have a cousin in the States. While he's not uneducated it's plain that his worldview and his social senses are shaped by FOX News, Limbaugh, Alex Jones (or this sphincter) and that crowd. The world he sees and the world we see are radically and irreconcilably different. He believes. He takes what he selectively hears on faith. And the only way to maintain that belief is to dismiss fact and evidence-based information as the stuff of conspiracies. The real world is one giant plot, a hoax, intended to lure him into some diabolical trap. Once you're in his place, Pizzagate and chem-trails become all too believable.

And so we sail into the uncharted waters of the unknown and perhaps unknowable with a crew ready to mutiny against itself and no one at the helm. I've got a sense, a feeling, that this is not shaping up well.

"If there's one thing we need to get much better at it's learning to deal with the unexpected."

Nick Taleb's "The Black Swan" and N. Klein's "Shock Doctrine" are good primers for this aspiration. Kinda like bookends to the whole issue.

That the "sphincter" (as you call him and I can't argue) is a professor at a "university" says an awful lot about the present state of the world, particularly in the US.