Time Magazine's "Person of the Year." It's Not Trump But It's His Victims. 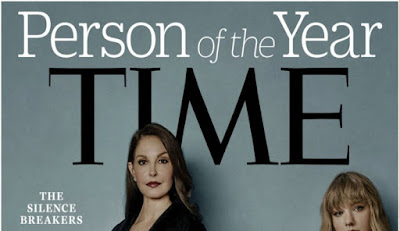 Donald Trump doesn't have to feel left out by Time magazine's choice of "person of the year." After all he's been very close to several of them - touching, fondling, groping-close.

This year's award went to "the silence breakers," women who have risked so much to come forward and speak out against the men who sexually abused them. By last count that would include 16 women who have leveled some pretty nasty accusations against the Mango Mussolini who boasted of his prowess at sexually abusing women and playing a Peeping Tom with you beauty pageant contestants in their dressing rooms.

There's a yuuge, Donald-sized difference between Trump and most of the other guys who have been brought down as sexual offenders in recent months. One difference is that Trump denies that he ever did the dastardly things he's been accused of. The other difference is that he's been recorded, on an Access Hollywood tape and on the Howard Stern show, boasting of doing the very sorts of things he so indignantly denies doing.

That's the difference between Republicans and Democrats. The Dems move quickly to clean house. They got Conyers to resign and now they're after Al Franken. The Republicans, by contrast, have an open door policy when it comes to their sexual predators whether it's the prowler, Roy Moore, or the groper, Donald Trump. And those born again evangelicals all dutifully line up to kiss their asses. Ain't life grand?
Posted by The Mound of Sound at 4:27 PM

They need a bigger cover

Shouldn't true Christians be all against adultery, lust and fornication?
One would logically assume THEM to be the puritanical ones instead of the more secular Democratic types.

Well...in Church you can repent and be forgiven your sins; go out and do it all over again the very next day B'y'. Whass dah mater wit ya 7:58 AM?

I see the "sexual revolution" of the late-60s/early 70s was all for naught.
...or maybe just the designated domain of a select group.

Either way one has to know the right people with the right connections in order to be introduced to a potential mate, or be connected themselves.
One still cannot go searching on their own without social resources and expect to run across anyone who isn't either already married, already engaged, too young and inexperienced, or not interested in anything but their own independent single lifestyle.

And being flirtatious, even in jest, is still viewed as a type of subtle "threatening gesture".
I'm not much impressed by this modern-day "sexual enlightenment".


I agree entirely, Tal. A lot of us seem to think we're simply better off on our own, especially after reaching a certain point in life.